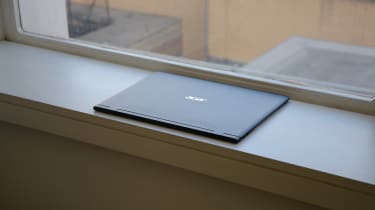 In 2017, Acer released one of the thinnest laptops on the market, the Acer Swift 7 (SF713-51). Although it was a svelte and stylish looking machine, it wasn't particularly snappy in the processing department as the company had opted for a lower-power, fanless Y-series Intel Core i5 processor. By placing this ultra-thin design above processing power, the Swift 7 couldn't really cut it amongst the more powerful competition, such as the Dell XPS 13 or the Surface Pro. So, naturally, we raised a suspicious eyebrow upon hearing the news that Acer had released a premium version, the Swift 7 (SF714-51T), with an even slimmer 8.98mm frame.

Obviously, size is no indicator of performance, but the Swift 7 needed to be souped-up rather than slimmed down further. So with an extra millimetre shaved off, we're curious as to what else Acer has sacrificed in its quest to be ultra-thin. Is the SF714-51T model a serious machine for professionals or just a pretty little dud?

The first part of that we can't deny - the Swift 7 is a beautiful waif of a laptop. It's stylish, it's elegant and its frame is remarkably svelte. It's the laptop equivalent of a catwalk model; it has even been dressed in a little matte black number that makes the gold of the SF713-51 look quite chunky in comparison - which is ironic as it actually weighs 700g more at 1.2kg. 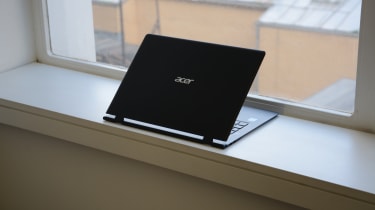 The aesthetic of it seems paramount to Acer, as every part of the design has been touched up a little. The screen has been expanded to 14in because, with smaller bezels, the edges are nicely curved and there are gorgeous trims of silver here and there. It's a thing of beauty, smooth to the touch, but don't let that fool you because it's also sturdy. Despite the thin frame, the aluminium shell is tough, the screen is covered with Corning Gorilla Glass and fixed to the chassis with strong, squared hinges.

The focus on style is also abundant in the keyboard, which, unlike the SF713-51, is backlit to help with visibility in dark places or if you want to work with the lights off. The keys are responsive and noise free too, which is also a plus for working in quiet places. We do have small bones to pick with the questionable placement and sizing of the keys, though. For example, the Page up button is very close to the navigation keys, all of which are small and result in mistyping. And, like the SF13-51, there are no indicators lights for buttons like caps lock, but these are minor gripes rather than huge problems.

The same can't be said for the trackpad though, which is one of the most frustrating navigation tools we've ever had the displeasure of using. Once again, it's pleasing to look at, with its matte black finish and stylish silver trim, but it has a functional problem: its double-tap operation, which is used instead of a standard left and right click. It can sometimes work brilliantly; a trackpad that doesn't need any force to capture or action anything makes the whole operation effortless. But, too often it registers a double-tap by mistake and plays havoc with your work, accidentally highlighting bits of text or dragging and dropping pages and icons at random. This means that you'll actually be paying more for a lesser trackpad if you choose this premium version over the standard left and right click operation of the SF713-51 model.

As mentioned, this new model is a bit of a paradox in that it's slimmer but also heavier. The reason for this can found in its display, which is an exceptionally functional touchscreen - which may also go some way to explaining why it's almost 50% more expensive than the SF713-51. For that extra cash, you do get an easy to use tablet mode and a screen that also folds back 180 degrees. 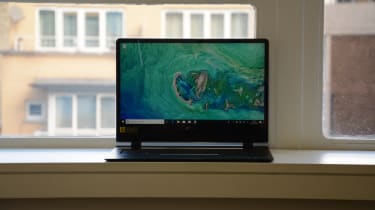 Acer has put some effort into improving the multimedia experience and to its credit, they've pulled it off with this fantastic display. With its sRGB coverage of 92%, the colours don't quite leap off the screen, but it is surprisingly good - for colour accuracy, the Swift 7 is excellent across the spectrum, with turquoise being the only colour that really causes any issues. This is all quite impressive considering it's a full HD panel with a somewhat standard 1920 x 1080 screen that uses a 16:9 aspect ratio. It's by no means the best on the market, but it's great for streaming on the go and with the brightness maxing out a 311.8cd/m2 it's good enough for most working conditions.

Our only complaint with the screen is the annoying position of the webcam, which is under the screen (underneath a pointless glass panel with the company logo) so it gives everyone you video call a lovely view up your nostril.

The Swift 7 uses a space-saving fanless Intel Core i7-7Y75 processor, which only has a 1.3GHz clock speed, and we do appreciate this is a remarkably thin laptop, but as a result, it's remarkably thin on power. The SF713-51 model had a Y-series Intel Core i5 processor and it couldn't compete with rivals - it was the little laptop that couldn't. The SF14-51T, however, which is the only other configuration, has a Core i7 processor, which is more powerful and also still saves space. But, while it's better than the previous model, it's still well behind almost every other laptop on the market for processing power because it is still using a Y-Series chip, which is significantly lower powered than other Intel Core chips - there are even some high-end smartphones with more juice than the Swift 7.

The machine takes a while to load up at first and it doesn't really pick up any pace once it gets going. Opening more than four windows, or more than three apps, is not recommended, as the poor thing cannot cope. This, again, is down to style over function. A more powerful processor with a fan would have been a better choice, but Acer really has gone all out for the 'thinnest in the world' title. Any decent hardware that could have improved the Swift 7 has been overlooked because it's too thick. 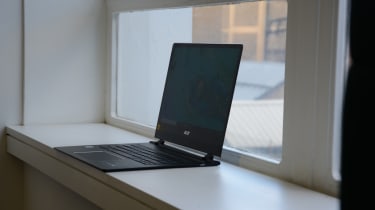 Predictably, the SF14-51T didn't come out well in our performance benchmarks, scoring a pitiful 37, which is again better than the previous model, but significantly short of the competition. For reference, the Dell XPS 13's score was around two-thirds higher and that's over 200 cheaper and only 1.6mm thicker. To compound this further, we can compare it to a number of other laptops, like the LG Gram, or even the Swift 5, and the only factor it comes out on top of is thinness.

For its price, compared with the SF713-51 model, it also doesn't have much storage or battery life - in fact, it has the exact same storage at 256GB and according to Acer the battery only offers an extra hour; it has 4589mAh capacity, which Acer says can last 10 hours, but we say will get you through a standard working day - which is a couple of hours short of 10. On our rigorous battery tests, the machine made it through 7hrs 58mins - a slightly disappointing score for such an underpowered laptop.

The connector ports is another area where keeping the size down has negatively impacted the function of the laptop. The Swift 7 has two USB-C ports which provide a multifunctional use for charging, audio and connecting other devices, but these are not Thunderbolt 3-enabled. And, despite managing to fit a headphone jack on the corner - where the machine has the most room to fit it - the Swift 7 hasn't got enough options for plugging in other devices.

Speaking of connectivity, the Swift has always-on 4G LTE for people who work on the go, where Wi-Fi is not available. This should really be on most laptops for us; it's a portable technology, you should still be able to connect to the web if there's no Wi-Fi.

Acer has upped the security on the Swift 7 with a fingerprint reader, but they've not really done it justice. It doesn't always recognise your digit the first time and it's also on the left-hand side of the keyboard, up by the 'tab' button, which is a little out the way for whatever finger you decide to register - sticking with an old-fashioned password is actually quicker. We're all for biometric security here at IT Pro, but this is an awkward example of it. 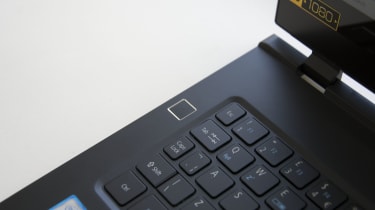 Despite its good looks, the Acer Swift 7's screen is okay, its performance is poor, the battery is mediocre and there isn't a lot else it can offer beyond being thin and pretty - It's so slim and light you'll hardly notice it's in your bag.

There was one goal with this production and that was purely aesthetical. So really we have to say well done to Acer - it's made the world's thinnest laptop, but that is literally all it has to cling onto. If you want to search the web, create word documents, or play solitaire whilst looking like you have a state of the art machine, then this is for you. But, if you actually want to get work done and get the specs and performance you pay for, we recommend looking elsewhere.

Despite its beauty, and the fact it's so light you can almost forget you're carrying it, the Acer Swift 7 is all style and little substance.