Asus ZenBook S review: S is for Style, not for Substance

A lightweight laptop with a neat elevated keyboard, but lacking in capability 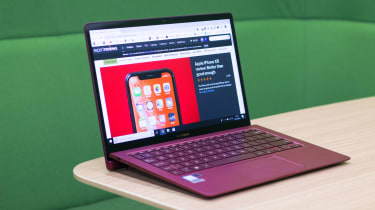 The Asus ZenBook S may earn you some odd looks at your local co-working space or Starbucks - it's using the same slightly unusual hinge design as the AsusPro B9440U, which elevates the keyboard when you open the lid.

It may be a little odd, but the AsusPro was one of our favourite laptops of last year, and the hinge was part of the reason why. Still, a laptop needs more than fancy design flourishes to secure our recommendation - and unfortunately, the ZenBook S just can't deliver where it counts.

The ZenBook S is designed to function as an ultra-portable spin-off to the Asus ZenBook and Asus ZenBook Pro devices. It's a sleek, compact device with a 13.3in IPS display, weighing only 1.4kg. When closed it has an incredibly slim depth of 12.9mm, slipping neatly into a rucksack, or under your arm when on the move. It even comes with its own snazzy protective sleeve.

The exact configuration we're reviewing - with a Full HD, non-touch-enabled screen, an Intel Core i7-8550U processor, 8GB RAM and 256GB SSD - is sold exclusively in the UK by John Lewis, and it goes for 1,099. 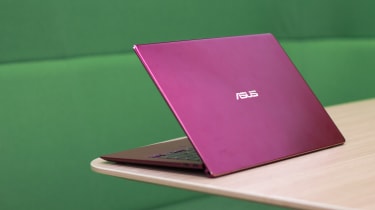 As mentioned previously, the ZenBook S has an unusual appearance for a laptop thanks to the elevated base. When the lid is closed it lies flat to the table surface just like any other laptop. But behind the hinge at the rear edge of the laptop is a bit of extra bulk which acts like a lever, pushing the laptop's base upwards off the table when the lid is opened.

Besides looking pretty cool, this has two key effects. Firstly, it provides more ventilation for the CPU, providing a lot of space to dissipate heat. Secondly, the angle provides a more ergonomic, 'natural' typing experience - at least, that's the idea.

The extra ventilation is much needed, as it happens, because the ZenBook S gets extremely warm when performing more demanding applications -- and sometimes when it's not doing anything at all. We clocked the base's temperature at 54 degrees centigrade. According to LiveScience, an egg can be cooked at 55 degrees. For a more worrying point of reference, human skin can be burned by temperatures as low as 44 degrees. This means it's not really suitable for using on your lap. Given that we're talking about a laptop, that's a real problem.

Still, the ZenBook S is a fetching device - it has an all metal (primarily aluminium) body which features Asus' trademark 'spun metal' finish on the lid, and it comes in either a striking burgundy red or an equally attractive deep blue. At 311 x 213 x 12.9mm, this is one trim laptop. But that svelteness comes at a cost: ports.

Excluding the 3.5mm audio jack on the lower right hand side of the lid, there are only three ports on the Asus ZenBook S, and they're all USB-C. Asus includes two clunky adapters, one for USB 3.0 to USB-C and the other for HDMI to USB-C. When plugged in they seriously cramp the ZenBook S' style, and there's always a possibility that you might lose them and have to buy your own down the line. Asus also sells its own Mini Dock for 75.

Dual Harman/Kardon speakers are tucked away on the laptop's underside, where they sit towards the front and lie in contact with the table surface. This has the effect of boosting the audio, although even at max volume the ZenBook S suffers from a tinny sound, and we've tested smartphones with louder speakers than these.

The elevated keyboard takes some getting used to, especially if you type primarily on a flat keyboard. After a few minutes it really grew on us, however, and we enjoyed the angle at which our wrists rested while our fingers typed. It definitely felt as though our hands were in a more neutral position, which in turn made typing feel easier. 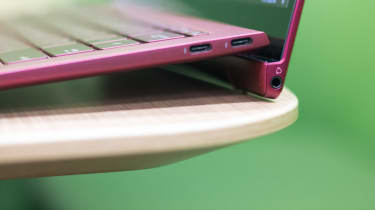 Having said that, we did not enjoy the keys themselves so much, as there's little satisfaction to be drawn from the limited travel or the overall feel. Personally, we prefer a more weighty, clicky keyboard with more travel depth. All the same, we didn't have any problems with the layout, and must admit that the glossy red finish is pretty nice.

On the touchpad is a fingerprint reader, nestled in on the upper right corner, but this turns out to be a poor design decision. There are many places on the laptop where a fingerprint reader could have been installed, so why add it here? When using the touchpad, conscious effort must be made to avoid the section of the containing the sensor. Once your finger slips into the inset groove of the reader, you lose control of the cursor. Essentially what you've got is a touchpad with a chunk missing.

The 13.3in IPS display on our ZenBook S review model has a 1,920 x 1,080 resolution, although there is also a 4K touch-enabled configuration available. The display looks fine when playing Full HD YouTube and Netflix videos, but our display calibrator revealed that it has a pretty sub-par gamut coverage of 87%, which is compounded by oversaturation. Every colour, aside from some shades of black and gray, is inaccurate and an average Delta E of 5.1 highlights how unsuited the ZenBook S is for photo or video editing.

A contrast ratio of 1099:1 is unusually low for a laptop of this price. Display brightness is also disappointing, with a maximum measured luminance of 288cd/m2; simply put, that's not good enough for a mid-range laptop, let alone a premium effort. Working under harsh lighting conditions the screen will suffer from glare, making it difficult to see when sat by a window on a bright day, and borderline unusable in direct sunlight. Given how hot the laptop gets indoors, we would avoid putting it in sunlight either way.

Now for the all-important benchmarks. Inside the Zen Book S we're reviewing is an Intel Kaby Lake-R Core i7-8550U, plus 8GB RAM. Although the CPU came out pretty well from our media benchmark tests, with an overall score of 62, we had hoped it might keep up better with the likes of the Surface Laptop 2, which achieved a speed of 84 using a lesser i7-8250U chip. 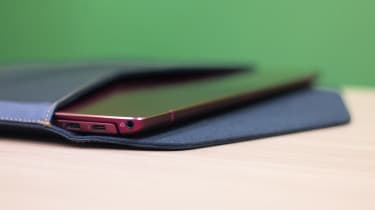 Sequential read and write speeds, while not terribly slow, are a notch below the competition. The SSD in the Asus achieved file read speeds of 459MB/sec, and wrote files at 204MB/sec which, again, falls short of the Surface Laptop 2. Of course, our test sample packs in a 256GB SATA-3 SSD rather than the 512GB NVMe SSD found in the Dell XPS 13, which is leaps and bounds ahead in terms of throughput, and configurations are available with a 512GB or 1TB PCI-E drive. If you're working on tasks where SSD performance matters, you're likely to notice the difference.

The ZenBook S didn't do too well in the battery rundown test, either. Given that it only has a FHD, non-touch display, we had hoped it might surpass rival laptops with higher resolutions or touch displays, or both. Sadly, its battery life only lasted for 6hrs 13mins of continuous video playback, which is about an hour shorter than the Surface Laptop 2.

We would consider anything below 6hrs in the standardised battery life benchmark to be unacceptable on a laptop costing 1,000 or more, so the ZenBook S is treading a fine line here. Odds are that the battery life on the 4K touch-enabled configuration is considerably shorter.

For around the same money as this review model could get your hands on a number of excellent machines, including the stunning new Microsoft Surface Laptop 2 at 1,249. Though slightly more expensive, its performance benchmarks beat the ZenBook S at every turn. You could also pick up a Dell XPS 13 for 1,249, although the class-leading model featured in our review costs 1,649. 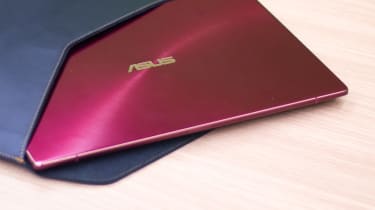 Asus gets top marks for style, but there are too many issues with the ZenBook S to recommend it over laptops like the Surface Laptop 2, Dell XPS 13 or even the LG Gram, all of which can be bought for around the same price. Aside from its neat elevating hinge design, there's nothing remarkable about it, and its benchmarks results are far from special.

Add to that the heating issues, flawed touchpad design and woeful lack of ports, and the price tag starts to look unreasonable. This is a laptop that, in aesthetic terms, has many positives, but go beyond the looks and the niggles soon outweigh them. Students and casual users might get by just fine, but if you're looking for a laptop that's capable of being something more than just eye candy, look elsewhere.

Although the Asus ZenBook S is speedy enough to satisfy, and it looks the absolute business, there are too many flaws to recommend it, including a disappointing screen and some serious thermal issues.