A business-minded cross-breed of Lenovo’s Yoga and ThinkPad laptops – is it a match made in heaven? 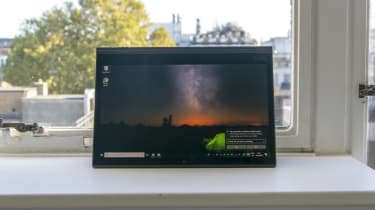 Lenovo's ThinkPad line is a bit of an institution. It's been a guiding light for security-conscious business laptops for over two decades now, with top-notch performance to get the job done. Lenovo's Yoga line, though more recent, has also earned a reputation of its own, changing the game for the 360-degree laptop.

And then there's the ThinkPad Yoga. Now in its third generation, it's a powerful crossbreed between Lenovo's two most well-known laptops. ThinkPads are known for heavy duty specs with an abundance of connectivity options, while Yogas, on the other hand, are famous for being lightweight and portable. The Lenovo ThinkPad X1 Yoga is, as Hovis might say, the best of both.

The model we're reviewing here is fitted with a 14in touchscreen display at a resolution of 2,660 x 1,440. An Intel Core i7-8550U CPU powers things, along with 16GB RAM and 512GB of PCIe NVMe SSD storage. That's some serious hardware heat, but is it really worth all that money?

Here's where the ThinkPad X1 Yoga becomes a tough sell. The exact configuration tested in this review will set you back a wallet-crushing sum of 1,871.

It gets even more expensive, however, if you decide to upgrade the CPU to an Intel Core i7-8650U chip and whack on a massive 1TB of storage for good measure. This particularly beefed-up setup will set you back a whopping 2,217.

Perhaps you don't fancy dropping upwards of 2,000 on a new laptop? In which case, you could splurge on the entry-level configuration of the ThinkPad X1 Yoga for a mere 1,360. That'll get you an Intel Core i5-8250U, a Full HD screen, 8GB of RAM and 128GB of storage. Plus the 3-year 'Think' warranty, which you get when you buy any ThinkPad through the Lenovo website.

As much as we like to avoid generalising, ThinkPads tend to look somewhat identical. In most cases, if you've seen one, you've seen them all. The X1 Yoga continues this trend, and while its design is far from revolutionary, a few subtle tweaks have been added. 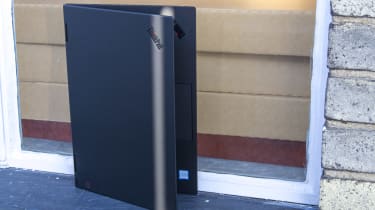 The ThinkPad X1 Yoga can now be picked up in silver, for starters, which offers a nice alternative to the classic matte black chassis so synonymous with the ThinkPad range. The body materials are much the same as its other ThinkPad contemporaries, though; Carbon, glass, plastic and magnesium combine to make for a sturdy - but not too heavy - chassis. The laptop tips the scales at only 1.4kg, and measures 33 x 229 x 17mm.

If it weren't for the touchscreen and the 360-degree hinge, we wouldn't be able to tell this laptop apart from the ThinkPad X1 Carbon. Both include nice, grippy surfaces that are perfect for carrying around, and the reversible hinge fitted under the screen works beautifully well, rotating smoothly to your desired viewing angle.

Like previous ThinkPad devices, the X1 Yoga has a powered stylus which slots into the right-hand edge of the base. The relatively-small pen is made of plastic, and does feel rather flimsy, although it is nice and responsive. Crucially, however, it's included at no extra cost.

The webcam shutter is the most welcome new feature, which can quickly block out the laptop's camera with a small slider situated above the screen. A basic security requirement, yes, but many other business-focussed ultrabooks fail to deliver on this front. Offering even more security points, the ThinkPad X1 Yoga has a fingerprint reader located to the right of the trackpad.

Connectivity options, as with all ThinkPads, are as good as you'd expect from a premium business laptop. On the left edge you'll find two USB-C ports (the charger plugs into either of these) which are both Thunderbolt 3-enabled. There's also a full-fat USB 3.0 connector. 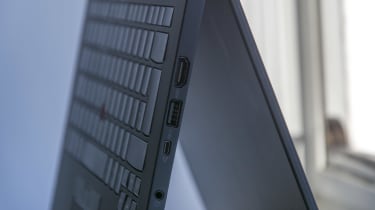 There's an HDMI 2.0 slot on the right, along with another USB 3.0 port, Ethernet port and 3.5mm audio jack. The power button is also on this same edge. With the lid closed, you can open up a small hatch tucked away on the back edge, which reveals a nano SIM slot and microSD reader.

The Dolby Audio-branded speakers are fitted on the underside of the laptop, although audio doesn't sound muffled when placed on a flat surface. Crank the volume up to max, and the speakers are perfectly loud enough to fill a large room with a Mozart concerto.

You know what you're in for when it comes to a ThinkPad keyboard, and the X1 Yoga's typing experience is no exception. Travel and feedback is excellent, producing a satisfying clicky sound, and the chiclet-style keys are subtly curved to improve comfort. It's a sheer joy to type on.

One complaint is the placement of the PgUp and PgDn keys. These two keys sit very close to the left and right of the arrow keys and are irritatingly easy to press accidentally.

Another problem is heat. This was a minor issue with the ThinkPad X1 Carbon, but with the X1 Yoga the upper base of the laptop became worryingly warm during some of our demanding benchmarking tests. Using an IR Thermometer gun during one such test we found that the upper base had reached a high of 56 degrees Centigrade. During another test, Core Temp showed an average CPU temperature reading of 90 degrees Fahrenheit. When it's this hot, it's actually uncomfortable to touch the top few rows of the keyboard. 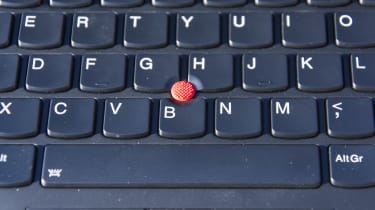 The red TrackPoint, fitted between the G, H and B keys, remains a core component of the X1 Yoga's design. Though we don't really care to use it much, this is a legacy feature which many would miss were it to disappear. The TrackPoint's sensitivity settings can also be adjusted, which is great for accessibility.

Although we could get used to the TrackPoint if forced, we much prefer the excellent touchpad. We never once experienced any problems with accuracy - it moves the cursor with perfect precision, and has a lovely texture too. It was also free of the occasional glitches we experienced with the X1 Carbon. Unlike most laptops, the left and right click button are above the trackpad rather than below it.

This particular ThinkPad X1 Yoga arrived with the top-spec 14in IPS touch-enabled display, with a resolution of of 2,560 x 1,440. Lenovo says the screen offers "500nit brightness" and "complete" colour gamut coverage, but does it live up to its marketing-heavy product description?

Mostly, yes. Our display calibration tests revealed an sRGB colour gamut coverage of 99.6%, which is pretty much perfect - with a cheeky spot of rounding up. The gamut volume of 150% is less so; colours on screen are massively oversaturated, as an average Delta E measurement of 3.87 made doubly clear. The display still looks fantastic, but it isn't really suitable for colour-sensitive image- and video-editing tasks.

Lenovo isn't kidding about the laptop's brightness, though. A maximum luminance of 516cd/m2 is retina-blindingly good, which of all the laptops we've reviewed recently is second only to the ThinkPad X1 Carbon.

Considering how much it costs, and based on our experiences with other ThinkPad laptops, the X1 Yoga's performance isn't anything special. Especially given that it packs the same Kaby Lake R Intel Core i7-8550U CPU and 16GB RAM as the ThinkPad X1 Carbon, which was much faster.

As you can see, the X1 Yoga's combined benchmark score of 59 is easily outclassed by its competitors, and we suspect the laptop's heat issues are the likely culprit. For comparison's sake, the Surface Laptop 2, equipped with an Intel Core i5-8250U, is much faster - it scored 84 in the media benchmark test - and costs a lot less.

Business-grade laptops need to be equipped with speedy SSDs, and in this department the ThinkPad X1 Yoga excels. With read and write speed scores of 2,246 and 1,750 in the AS SSD file sequencing benchmark, the beastly 512GB PCIe NVMe SSD steams through files like a tech journalist with a sharing pack of Oreos.

The ThinkPad X1 Yoga's battery life could be better, though. Reaching 6hrs 3mins in our continuous video playback test, battery levels plummeted to zero two-and-a-half hours sooner than the Dell XPS 15 2-in-1. If you're planning to use it on a long-distance flight, make sure to get it fully charged before you hop on the plane.

Fusing the ThinkPad with the Yoga was a cracking idea, and the result is a formidable business laptop that doubles up as a flexible entertainment device. It has its problems - namely excessive CPU heat and poor battery life - but on the whole it's a perfectly-competent multi-purpose machine.

Throw in a long list of connectivity options, excellent security features and solid build quality, and we'd recommend the ThinkPad X1 Yoga to anyone looking for a business laptop with a twist; the 360-degree hinge and touch-enabled display make for a staggeringly versatile device.

Combining the power and functionality of the ThinkPad range with the versatility and flexibility of the Yoga family, Lenovo's ThinkPad X1 Yoga offers an appealing proposition for business users, although it's let down by a disappointing battery life and some unfortunate thermal issues.