A laptop may now be a fashion statement, but it's still a tool of work

People need a compelling reason to upgrade, so why is Microsoft living in the past on USB-C? 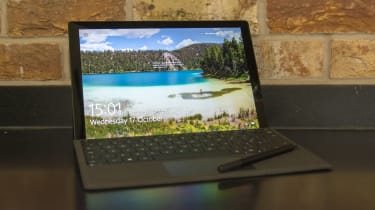 What does your laptop say about you? If it's battered at the edges and finished in old-school grey, you may consider every scratch a badge of honour. Perhaps you're a MacBook advocate, where industrial design and that mirrored Apple logo send a message of success. Or you might have smothered it in stickers, turning it into a no-logo John Doe.

Whether we like it or not, our laptops say something about us. I think Microsoft understands this. After all, the only visible difference between the Surface Pro 6 and Surface Pro 5 is colouring: dressed in svelte black, the Pro 6 is a fine-looking beast.

It's bizarre, though, that we've got to the tail end of 2018 and the company remains incapable of looking outside its own bubbled existence. With a couple of exceptions, every Microsoft exec I've met has been clever, motivated and passionate but so deeply instilled in the Microsoft way of doing things that they can't separate themselves from the Bill Gates Borg. It's as if the prime consideration when hiring is to make sure the potential employee shares the Microsoft worldview; anything different is dangerous.

Take the lack of USB-C ports on the new Surface devices. Surely someone in the design team must have shouted out that sticking with mini-DisplayPort was stupid? Really, really, dazzlingly stupid. I suspect no-one did, so frightened were they to rock the boat. And even if junior designer Bob did find the courage to raise a hand and question the wisdom of sticking with a display connector so old-fashioned that it wears spats and knows how to foxtrot, nobody listened.

Why, Microsoft, why? In USB-C we have a modern format that supports power, video and data, whether you choose USB 3.1 or the superior Thunderbolt 3 bus. Sticking with DisplayPort is the equivalent of sticking with Gary Lineker because he did a good job in the Mexico World Cup.

But no, mini-DisplayPort it is, and so we have to explore why. Tooling costs? Definitely an argument there: this is the same chassis as before, so there are minimal R&D costs to absorb and greater profits for the Microsoft machine.

And perhaps that was the deciding factor. Although I say Microsoft machine, I'm sure that the Surface division must need to robustly defend its profit and loss figures when compared to the cash-generating arms of Office and Azure.

Whatever the reason, it's a misstep. Microsoft may justify the lack of USB-C by saying customers aren't asking for it yet, but Microsoft needs to be at the forefront of change, pushing it and avoiding proprietary formats.

People need a compelling reason to upgrade their laptops now more than ever. I'm a big fan of Intel's new generation of mobile processors, and note that AMD has finally entered the mid-range game with the mobile Ryzen 7 in the Lenovo Yoga 530, but a bump in speed and battery life just aren't enough to make most people want to retire their two or three-year-old machines.

We want something new. Maybe that's the ability to play Fortnite, but more likely it's infrastructure: show me that I can get rid of a cable and I'm a happy man. Asus believes that design is the key, with the bold design of its ZenBook S setting it apart. While I'm not a fan of the glossy lid, it includes three USB-C ports, two of which support Thunderbolt.

If you're reading, Bob, I suggest you apply for a job there.