Asus has revamped the Zephyrus line, and it’s much better than before 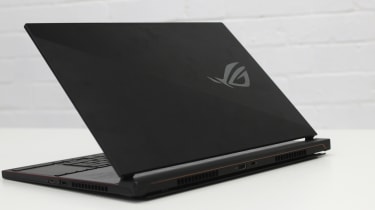 Asus' Republic of Gamers range is always flashy, it's always red and it's usually pretty good. So with its new Zephyrus S model, we expected big things, especially considering the previous iteration was so supremely powerful for its form factor.

The 'S' stands for slim, but this isn't particularly so if we're comparing it to the wider world of slim laptops. It's slightly thinner than the current MacBook Pro, but compared to the MacBook Air, it's positively chunky. That's to be expected though, especially considering the calibre of equipment that's nestled under the hood.

Don't be put you off by the gaming branding - the workplace demands hardware that's going to get the job done, lag-free, which is exactly what the Zephyrus S does.

Many gaming laptops are laden with RGB features and this is no different, but don't let that dissuade you. Although its RGB features are prevalent, they're not bright enough to distract the eye from the screen and can be easily turned off if you want to be taken seriously at the office.

This beast of a computer is packed into a black chassis; half of the lid, the bezel and the keyboard is finished in a matte effect and other parts have a sleek and shiny (albeit plastic-y) finish to them. Although the laptop doesn't look as sleek or as polished as a MacBook Pro, it's by no means an ugly duckling. The contrasting finishes work well and the all-black colour scheme exudes professionalism.

In terms of size, this machine is fairly big, especially for a laptop that prides itself on how slim and light it is. Measuring 310mm wide and 157mm thick, it's by no means ultraportable, but it still comes in noticeably thinner than its predecessor (179mm thick) and Asus wouldn't let this model on the catwalk without a diet - it's 100g lighter too. It's thinner than the Razer Blade 15 which measures in at 17.3mm and is just 2mm fatter than the much pricier MacBook Pro. 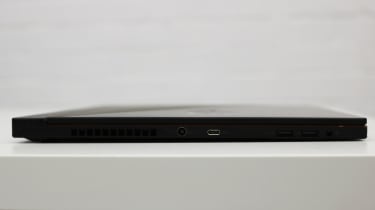 The bare space above the keyboard is also very noticeable - a lightly-ventilated spot between the top of the keyboard and the bottom of the screen that's reserved just for the GPU. The trackpad is situated to the right of the keyboard as opposed to beneath it, which is presumably a necessary space-saving measure to accommodate the GPU vents.

We couldn't talk about design without mentioning the expandable chassis. Yes, you read that right; as the lid opens, so does the base of the unit. A collapsible panel beneath the main unit creates a much larger cooling vent than is traditionally found on a laptop of any kind. It's a good feature that stops the machine's fans from spinning loudly as loudly as on some other high-performance notebooks - a common annoyance with hard-working, under-ventilated gaming laptops.

There's nothing too much to shout about the keyboard; it's a standard membrane model and Asus claims it can withstand 20 million key presses before issues start to occur. It felt nice to type with but nothing to write home about. If you're after a luscious typing experience, the latest generation MacBook Air and Pro are the ways to go with the divine new butterfly keys.

One small issue we had with the keyboard is that, presumably to save depth, there's no wrist rest so you'd better have some extra desk space if that's a requirement for you. Luckily, with the machine being so slim, a desk provides comfortable support without having to angle the wrist too far upwards to reach all the keys.

The trackpad is a little on the small side but still very usable and the multi-touch gestures work well once you get the hang of them, making the awkward positioning a little more tolerable. It also doubles as a traditional number pad; at the push of a button, an illuminated number pad appears on its surface, which is a pretty cool addition if you ask us. The only drawback (for some people, that is), is the fact that the trackpad is positioned on the right side of the keyboard, so lefties are left a little short changed. 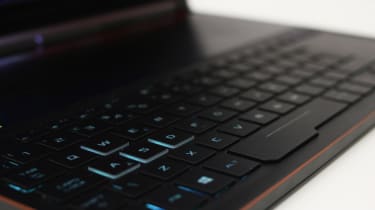 The laptop comes with a free Asus ROG Strix Impact optical mouse which feels nice and comfortable despite being quite small. We definitely recommend using this whenever possible because the trackpad can seem quite small, so in some cases, moving the cursor from one side of the screen to the other can take a few swipes.

The Zephyrus S's 15in display is... just fine. You won't hate it, it's still an okay display - just not an ideal one for editing video or images. We wouldn't want to watch a movie on it - it's a bit dull and the colours are nowhere near as colour-accurate as a MacBook's retina display.

We reviewed the lowest-spec model from the Zephrus S line but even with upgrades, you won't get anything else in the display department - just the same slightly disappointing 1080p screen.

What you will enjoy is the 144hz refresh rate which makes things like the animation of switching or minimising a window so satisfyingly smooth. It's like watching a YouTube video in 60 FPS instead of the standard 30 FPS - a touch of quality you won't fail to notice even after extended use.

Asus promised a lot from the display, including 100% sRGB gamut coverage, but you don't need to be a monitor aficionado to see that the display just doesn't quite deliver. The display heavily favours blue shades, and the over-saturation is visible even to the untrained eye. The sRGB gamut coverage was lower than the promised 100% at just 85.3%, almost exactly the same as the previous Zephyrus. 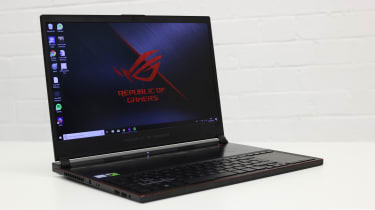 We also expected a little more brightness from the screen. We weren't straining our eyes at any time, but even at its maximum brightness level, the screen wasn't very impressive - the max brightness score we recorded was just 267 cd/m2. Compare that to the MacBook Pro's score of 445cd/m2 and you get an idea as to how dim this one is.

This is the part of the review a machine like this comes to flex because if there's one thing a gaming computer does really well, it's putting on a good show in our benchmark tests.

It's worth mentioning that the model we tested wasn't the top spec model on offer: the GPU in our review unit is an Nvidia GTX 1060, whereas the top- spec model comes with the company's all-new RTX 2080 in it. Elsewhere, our machine had an 8th-gen, 6-core Intel Core i7-8750H and 16GB of 266MHz DDR4 RAM. Despite lacking an RTX GPU, however, the Zephyrus S blitzed our benchmarks tests, posting some of the highest laptop scores we've seen.

Another contributing factor to the machines impressive showing on the benchmark tests is the new 6-core CPU. The extra cores really made a difference in our tests compared to the previous model's Kaby Lake predecessor and it really shone in the multitasking tests.

Our tests involve image and video rendering and are intensive on all of the aforementioned components. The Zephyrus S was among the best laptops we've ever tested in terms of performance, scoring 166 overall - a score that beats the Razer Blade 15's of 127 and just failing to beat Apple's 15in MacBook Pro and the Dell XPS 15 by only a fraction. In fact, it effectively managed to match both machines in our professional workstation benchmarks as well, which is no mean feat.

What surprised us most about it was how quiet it was when doing all of this - comparatively speaking, at least. You'll have difficulty finding a gaming laptop that doesn't sound like a jet engine while performing demanding tasks, but this held up reasonably well. It was moderately loud and people a few desks away will know if you're doing something intensive, but it's not annoyingly noisy like others on the market. The fans can run slower and (subsequently quieter) due to the expanding cooling intake, which is a delightful piece of engineering.

As you may expect from a monstrously powerful machine like this, it takes a lot of juice to run it. Asus has clearly opted to cram as much stuff into it as possible to make it go like the clappers, and there evidently isn't much room for a decent-sized battery as a result.

This is probably why it scored so miserably on our battery benchmark tests - it died under moderate load after just 3hrs 1min. But if you're buying a computer for its battery life then you'd be mad to look at anything that's branded as a gaming machine anyway. Gaming computers are known for being power-hungry machines because the graphics cards used to facilitate smooth gameplay are hugely demanding on the power supply, even when idling.

If it is battery life that you're after, you'd be better off going with either the XPS 15, which will get you a little over seven hours on a full charge while the MacBook Pro, despite its gargantuan price tag, will grind on for over eight hours. Both of these will set you back more money so it's a trade-off if you're willing to make it.

Despite being packed into a seriously slim chassis for a computer of this power, the Zephyrus S brandishes all the ports you could need on the go or at home. 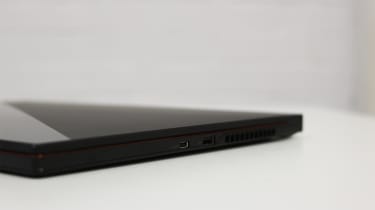 In terms of USB slots, you're pretty much covered on all bases. Two USB 2.0 ports and one USB 3.1 offer full-sized USB connectivity while USB Type-C ports offer power supply and external display options as well as other supported devices and accessories. You'll also be able to use its HDMI port if USB-C isn't an option for you.

There's no denying the Zephyrus S is supremely powerful - that's its main selling point and it comes in at a cheaper price point than both the XPS 15 and the MacBook Pro too. For the price, it's a solid choice if you're willing to deal with a few drawbacks.

The display isn't ideal if you want or need something super crisp like a MacBook and despite being packed into the size of a laptop, this thing is not made to be mobile. The battery life on the Zephrus S, irrespective of the power it produces, is abysmal and is fairly inexcusable for a piece of tech in 2019.

But, if you don't plan on using your workstation away from your desk for too long then there's no reason not to heavily consider the Zephyrus S. It might suffer in the battery and display department but make no mistake, it'll blow you away with its performance.