The flexible ThinkPad dives into the foldable smartphone trend 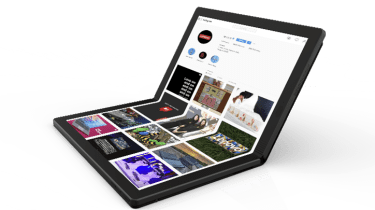 It appears the folding fad isn't finished yet; Lenovo has officially unveiled what it has dubbed the world's first 'foldable PC', set to be integrated into its flagship ThinkPad line next year.

The device is comprises a single 13.3in 2K OLED panel (produced in partnership with LG Display), which folds down the centre to create a notebook-style form factor. While it will reportedly come bundled with a Wacom stylus and detachable physical keyboard, Lenovo envisions use cases such as folding it up to read like a book, or using it like a miniature laptop while commuting.

Showcased at the company's Accelerate conference in Florida, the device is a prototype unit that the company has apparently been working on for a number of years. It has not yet been named, but will be sold under the ThinkPad X1 brand, with a scheduled launch date of some time in 2020, with more details to follow.

At present, the only details we have regarding specifications is that it will run the Windows 10 OS on an Intel CPU. We also don't know how expensive it's likely to be - although based on the price of recent foldable smartphones, it's safe to say that it's probably going to be more expensive than most of Lenovo's other Thinkpads.

The announcement follows a flurry of foldable smartphones from the likes of Royole, Samsung and Huawei, most of which debuted at MWC in February. These devices have elicited both excitement and derision from smartphone fans; many have praised the innovation on show, but several critics have questioned the usefulness of foldable phones.

These critics have also raised questions over how long these foldable screens will last before breaking under the strain of being repeatedly folded and unfolded. These fears were compounded when early samples of the Samsung Galaxy Fold were found to experience failures within days.

In some cases, Samsung has blamed the failures on the removal of a protective film that should be left on the screen. But the fate of the fold is currently uncertain and Samsung has not confirmed whether the launch will be delayed or cancelled.

Unlike the Galaxy Fold and the Huawei Mate X, Lenovo claims the new device is "not a phone, tablet, or familiar hybrid; this is a full-fledged laptop".