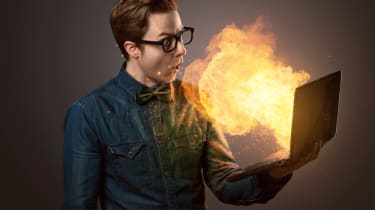 MacBooks are so hot right now, particularly 15-inch Pro models sold between September 2015 and February 2017 which are being recalled due to batteries that can overheat and pose a danger to users.

According to Apple, these pose a fire safety risk and the company is asking for customers to stop using them immediately. Its advising customers to check their model's serial numbers on the website and see if they are eligible to have a battery replacement, free of charge.

"Apple has determined that, in a limited number of older generation 15-inch MacBook Pro units, the battery may overheat and pose a fire safety risk," the company said.

"Affected units were sold primarily between September 2015 and February 2017 and product eligibility is determined by the product serial number. Customer safety is always Apple's top priority, and we have voluntarily decided to replace affected batteries, free of charge."

The specific model is the MacBook Pro (Retina, 15in, mid-2015) - specs of which can be found here - and if you have it, we recommend having it checked out by an Apple store. If you need more convincing there's a post on Reddit from a user called Whitepandamusic with all the hot details.

He posted a video of his MacBook after it had "exploded" during "normal use". The machine was plugged in and, rather precariously, place on his lap, when it suddenly started to "spew smoke out both sides".

"Yesterday afternoon my MacBook Pro exploded during normal use," he said. "It was on my lap, plugged in, and suddenly started to spew smoke out both sides. I quickly placed it on the floor where it popped, the smoke increased, and it caught fire. Toxic smelling smoke filled my house triggering smoke and CO alarms."

My MacBook Pro exploded today during normal use. No injuries, luckily. Some damage to the house. Could have been worse - good thing I wasn’t on a plane.Very curious to see how @Apple responds.@MacRumors @TechCrunch @9to5mac pic.twitter.com/pjmpv5Mx9b

The user managed to take the "scalding hot" laptop to the porch using gloves and posted a short video of the smoking device while it cooled down. He then took it to a local Apple store but was told nothing could be done until it had spent 24 hours in a fire-proof safe - they would talk through the next steps afterwards.