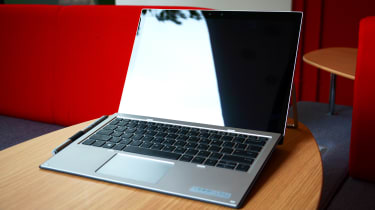 As business needs have evolved over the last decade, the popularity of 2-in-1s has swelled among professionals. These devices are renowned for their sleek aesthetic and versatility, but are also generally powerful enough to please the average user.

Microsoft has arguably conquered the market with its detachable line of Surface Pro 2-in-1s, but HP has proven a worthwhile competitor. The Elite X2 1013 G3 is the next step in a line of solid and stylish business-centric hybrids, and follows close in the footsteps of 2017's highly recommended Elite X2 1012.

As with its previous X2, HP has been inspired by the design and functionality of Microsoft's Surface Pro, and between them, the two companies have manufactured a string of excellent devices. Given last year's Surface Pro 6 stumbled against Microsoft's usual high standards, the stage is primed for HP's Elite X2 to showcase its credentials.

HP's latest iteration of the Elite X2 is almost identical to its predecessor, but that's not a bad thing at all. The only discernible changes are its slightly larger display, and the absence of a horizontal black bar across the uppermost portion of the rear, where an 8MP camera is found. Otherwise, the 1013 G3 closely mimics the 1012's Surface Pro-esque look and feel.

From its exquisite display to its wafer-thin keyboard cover, the X2 exudes a professional aesthetic and polish that caps off its strong design. This is reinforced by the sturdy build of its silver-coated aluminium chassis, which is particularly evident when handled. For a device to come across as business-first while looking as stylish as this is no mean feat, but there are one or two questions to answer when you dig beneath the surface. 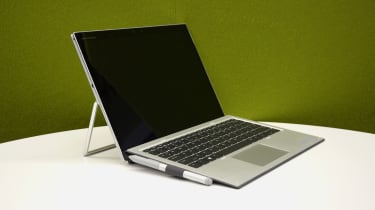 The kickstand, a solid metal bar, is reliable and sturdy while using the Elite X2's touchscreen display on a flat surface. Using the device on your lap with its keyboard cover fitted, however, isn't as comfortable as a conventional notebook. Opening and shutting the 'lid', too, can be fiddly. Meanwhile, the leather-bound base of the cover is far more aesthetically appealing than the display's businesslike rear but remains hidden most of the time, given that it makes no practical sense to rest the machine bottom-up.

The X2's dimensions are slightly larger than its predecessor, measuring 13.2mm thick with the key cover attached. This is a few millimetres thinner than the 13.5mm Elite X2 1012, which is a negligible difference, but a small sign of progress considering the 1013 has a display that's 0.7in larger.

Comparisons with the Surface Pro 6 will be rough given Microsoft's device also carries a 12.3in screen. The X2's display is thinner than the Surface Pro 6's, at 7.9mm versus 8.5mm without the key cover attached, however. The X2 1013 is also just 100g heavier weighing in at 1.18kg with the key cover, and 810g without.

On first glance, the Elite X2's 13in IPS touch screen display is vibrant and sharp, and an improvement on the excellent 12.3in tablet display of its predecessor.

While the 3,000 x 2,000 screen doesn't quite hit 4K resolution, it's a step up from the 2,736 x 1,824 resolution of both the X2 1012 and the Surface Pro 6. It also matches the resolution of the Huawei MateBook X Pro, which boasts a phenomenal display. The colours are crisp and fairly accurate, meanwhile, with a striking 91.5% coverage of the sRGB spectrum. In practical terms, this translates to ever-so-slightly oversaturated greens and blues and marginally undersaturated reds. 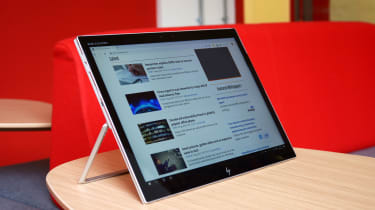 With a maximum brightness of 413cd/m2 and high 1476.5:1 contrast ratio to boot, this sharp tablet display is certainly one of the Elite X2's strongest assets. This is marginally shy of the Surface Pro 6's 416cd/m2 maximum, but the 1013's colour accuracy edges the flagship Microsoft device's 88.6% coverage of the colour gamut.

Just as with Elite X2 1012, this display is built with a tough Corning Gorilla Glass 4 coating and is unfortunately still lacking in an anti-glare coating. Thankfully, these brightness levels are high enough to overcome most reflections when using the device in a well-lit room, but it proves more challenging the minute you turn the brightness down or put the machine in direct sunlight. To its credit however, working in these conditions is perfectly manageable, so long as you're comfortable staring into your own reflection.

Despite being relatively lightweight, the Elite X2's detachable keyboard feels as sturdy as that of any conventional notebook. Moreover, the typing experience it offers makes this device an absolute pleasure to use.

The keystrokes are delightfully crisp, and the keys themselves exude a deeper travel distance than the cover's slender frame would suggest. Moreover, they are well-spaced and well-sized, so there's no prospect of accidentally whacking the wrong letter or symbol while typing. It shouldn't be much of a surprise given HP's 2-in-1 keyboards are normally up to a high standard. This only applies to working on a solid surface like a desk or workbench, however. Typing on your lap, for example, leaves the machine feeling just as wafer-thin as it looks, with rapid keystrokes jittering the display.

In addition, the F1 to F12 keys also feature nifty shortcuts like surfacing Windows Calendar, or activating HP's SureView screen security function (with compatible displays), alongside a couple of keys configured around its cellular functionality. 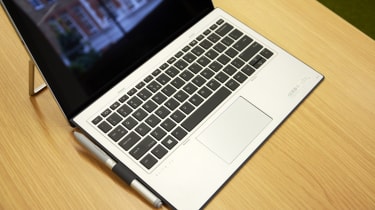 The trackpad, meanwhile, is incredibly smooth to the touch, thanks to a delightful glass coating, although it's a tad on the small side. This is most likely a casualty of its large and widely-spaced keyboard, though.

This 2-in-1 is fitted with a quad-core Intel Core i7-8650U processor, running on a base clock speed of 1.9GHz, as well as 16GB of LPDDR3 RAM. Elsewhere, the device uses an Intel UHD 620 graphics chip and boasts a sizeable 512GB SSD drive.

HP's design prowess means it's sometimes easy to forget the Elite X2 is essentially a tablet with a clip-on keyboard, as opposed to a stylishly lightweight notebook. Performance issues stemming from a lack of effective cooling kick you back into reality, however. Simple tasks like word processing and web browsing are seamless, but it's when you throw applications like Photoshop and heavy-duty video playback into the mix that performance starts to taper.

Our tests reinforce this, with the Elite X2 scoring a middling 78. This is mainly down to the 2-in-1's sub-par multi-threaded performance, while its single-threaded performance is actually very strong. HP's device, which scored 116 on single-threaded performance, edges ahead of the Microsoft Surface Book 2 and Surface Pro 6, which scored 82 and 95 respectively. Again, it's the multi-threaded score that lets the Elite X2 down, performing the worst of all three, albeit marginally. This device, however, is eclipsed by an alternative HP 2-in-1, the EliteBook x360 1040 G5, which scored 88 overall. This is despite largely featuring the same internal components, including the same i7 chip - although the x360 has more inbuilt cooling. 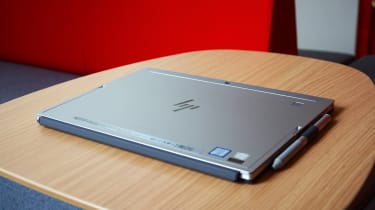 While general performance is a mixed bag, the Elite X2's battery is a straightforward disappointment, lasting only 5hrs 48mins in our video test. This is despite the manufacturer's claim of a 10hrs and 30mins lifespan. The Surface Pro 6, by contrast, boasts a day-long 8hrs 2mins lifespan, while the recently released HP Spectre Folio 13 lasted an astonishing 17hrs 28mins when tested. The Elite X2's predecessor even lasted longer, at 6hrs 32mins. There is a neat fast-charge feature that restores 50% battery life in 30mins, but the system has to be switched off in order to take advantage of this, which limits its usefulness somewhat.

The HP Elite X2 truly excels in its array of security-centric features and ports, featuring two USB-C 3.1 ports with Thunderbolt support, one USB-C 3.1 Gen 1 port, a 3.5mm headphone jack, and even a nano-SIM card slot and handy 4G wireless chip to let you work on the go without fear of disruption. The device also features a 5MP front-facing camera with an infra-red camera for facial authentication, and a rear-facing 8MP camera. Covertly-placed speakers, developed by Bang & Olufsen, also offer decent audio playback for a 2-in-1. There's a Bluetooth-powered digital pen too, which offers another way to interact with the device and remotely open apps, for example. It's particularly useful when presenting.

The only omission is that of a full-sized USB-A port, which featured in the X2's predecessor. This, presumably, was traded in exchange for shaving a few millimetres from the display's thickness, but it's sorely missed in terms of pure office functionality. If you want to connect thumb drives or peripherals, you'll likely need to purchase an adapter.

Meanwhile, connecting the USB-C ports with an external display, or even the HP-provided charger, can occasionally lead to overheating on the base of the display. Examination via Core Temp shows the cores do occasionally near their upper temperature limit, which could explain weaker-than-expected multi-threaded performance.

There's also something odd about the positioning of the ports; they're all fitted in the upper left and right sides of the display. Using headphones, for example, can be fiddly because the wire can cut across the display, and may even tangle with your fingers. The USB-C ports, too, look a little odd but thankfully this doesn't impede the functionality. 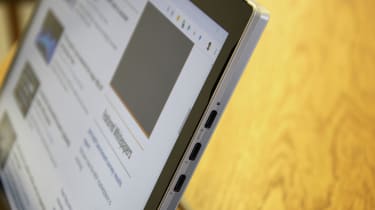 A host of security features, meanwhile, are bundled in with the HP Client Security platform. Among these are an anti-malware application, a recovery tool, a permissions manager, password vault, and more. It's a very comprehensive suite and worthy of credit. Some of these are very nifty, like Sure Run, which automatically updates apps on the device, in an age of lax patch management. Other features, however, can be slightly overbearing and get in the way, like prompts to open external links and PDF files in a secure browser.

The 2-in-1's infra-red facial and fingerprint authentication work just as intended, although the latter is located on the rear of the display and may be difficult to find at first. These can be configured either through Windows Hello or HP Client Security, although HP's software isn't compatible with the front-facing camera's infrared facial recognition for some reason, so we'd recommend sticking with Windows Hello for convenience's sake.

The HP Elite X2 1013 G3 is a curious mix of good and bad, with a gorgeous display, sleek aesthetic and sublime keyboard-touchpad combination that results in a very solid device. The breadth of features - including SIM-compatibility, a digital pen and handy security-centric tools - offers plenty of business appeal.

This 2-in-1 certainly stakes its claim for a role in the workplace, and it's a great alternative to the latest Surface Pro for those in the market for a 2-in-1. But it comes at a high cost, and if you aren't planning on making the most of the standalone tablet, there's no real substitute for a compact and versatile notebook. Sub-par battery life, meanwhile, is chief among a handful of flaws, including inconsistent performance and oddly-positioned ports.

Ultimately, the HP Elite X2 1013 talks a good talk, and certainly serves a purpose (it's almost unrivalled in terms of portability, for example). Unfortunately, barring a solid array of features, its strengths otherwise are matched - if not bested - by a plethora of cheaper rival devices, including 360-degree 2-in-1s and notebooks, meaning it's difficult to recommend the Elite X2.

The HP Elite X2 1013 G3 exudes class and certainly looks the part. It’s highly versatile and a pleasure to use for most day-to-day tasks but falls short of the performance levels demanded from a high-end business unit, especially given its cost.