There’s a lot to like about this professional notebook, but a dull screen and awkward keyboard get in the way 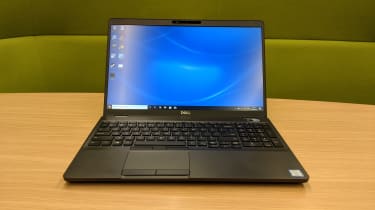 Dell has made some of the very best laptops in the business - most often, these are members of the premium consumer XPS range. Even so, an addition to the much more business- and security-focused Latitude family will also be worth a look - and the Latitude 5500 is one of the best-specced models you can get, at least without tipping over into the truly premium 7000 series.

At 359mm wide and 20mm deep when closed, this is a chunky notebook by modern standards. That does mean room for a number pad next to the keyboard, which can be very helpful for number-crunching work, but considering both the dimensions and the 1.8kg weight it's the kind of laptop we'd rather leave in a locker than carry home each night.

Even so, it's been put together well enough. With the exception of the plastic underside, there's aluminium bodywork throughout, minimal flex to the screen and a firm hinge. Inkeeping with the Latitude series' proclivity for security, it also gives you a choice of biometric sign-in options.

First is the webcam, which is compatible with Windows Hello for facial recognition. This worked just about instantaneously for us, even when wearing glasses, logging us in as soon as we sat down in front of the screen. Second is the fingerprint sensor, which is built into the power button. Again, this works appreciably quickly, not to mention reliably - we didn't have a single failed reading.

The Latitude 5500 is equipped with a 15.6in IPS display, running at 1,920x1,080. This particular aspect also seems like a good place to start explaining the differences between the model we were sent for review and what you can actually buy in the UK. Ours appears to be a US model, since - as if the US keyboard layout wasn't a giveaway - its specs, which include a touchscreen, 32GB of RAM and a 1TB SSD, are only advertised on Dell's US site. Back in Blighty, the closest equivalent lacks the touchscreen, and 'only' has 16GB of RAM and a 512GB SSD, for 1,009 exc VAT. 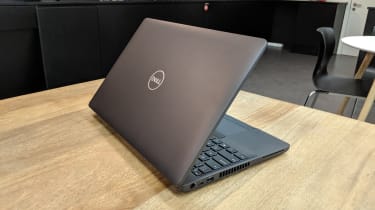 At least where the display is concerned, though, UK buyers won't be missing much. Colour performance is downright awful for a 1,000-plus laptop, with the Latitude 5500 only covering 55% of the sRGB colour gamut and averaging a high average delta-E of 4.03. That doesn't just mean colours lack vibrancy, but accuracy as well.

Meanwhile, peak brightness is a so-so 236cd/m2, and the Full HD resolution is enough to keep everything readable, but not particularly sharp when spread over near 16in of space. The Latitude 5500's only real strong suit, therefore, is contrast, which does hit a rather high 1:246. Viewing angles are wide as well, thanks to the IPS panel, though this seems more like a consolation prize.

In fairness, the Latitude series isn't built for the kind of media-editing work that strictly needs a high-performance display, but such dull, inaccurate colours are still a disappointment for a laptop as expensive as this one.

There's also something even worse about the Latitude 5500: its keyboard. There's backlighting, which is nice, but the chiclet keys feel uncomfortably small, and we had to slow down our typing to ensure we were hitting the right ones. To an extent, narrower keys are the inevitable result of squeezing in a number pad, but the space between the main keycaps feels unnecessarily wide. Much more so than is necessary for sufficient spacing; we'd rather have slightly bigger keycaps that don't require so much attention to hit reliably. The smallness of certain specific keys, mainly Backspace and Enter, is especially offputting.

The touchpad is better. At first we weren't convinced by the matte surface, but after a while we began to appreciate its tactility, and there's no problem with excess friction. In true business laptop style, you also get sets of physical buttons both above and below the touchpad - though the topmost row encroach into what could have been keyboard space.

There's also a pointing stick between the G, H and B keys. The concave shape makes it feel a little slower to get off the mark than, say, the ThinkPad's famous red pointer, but it works well enough: it's responsive, without being oversensitive.

This is a high-end laptop chip, and it shows. The Latitude scored 105 overall in our application benchmarks, which is a few points higher than the HP EliteBook x360 1040 G5, Vaio SX14 and Dell's own Latitude 7400 2-in-1 - all of which are more expensive.

Storage is fast, too: using AS SSD we recorded a sequential write speed of 1381MB/sec and a particularly nippy sequential read speed of 2449MB/sec. Yes, yet again you should be mindful that this is a different capacity SSD to what you can buy without importing, but 512GB is still plenty of room on a laptop - and it will probably just be a smaller version of the NVMe drive in our review unit, so transfer speeds will likely be comparable. 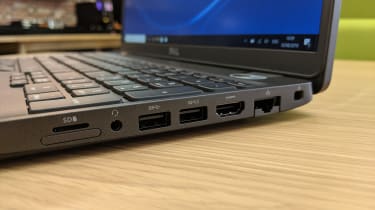 The main limitation to performance is the GPU, or at least the lack of a dedicated one. Integrated Intel UHD Graphics 630 can handle output to 4K monitors, but won't do much to accelerate visual applications.

In our video playback test, the Latitude 5500 lasted for 9hrs 31mins before running dry. That puts it well behind the Latitude 7400 2-in-1, but then so are most laptops; this result is actually quite good, or at least on par with most laptops of its price.

It's enough to last a full day at the office without needing a top-up, and will see you though a long flight as well. Longevity might be even better on non-touchscreen models too, as there's no touch sensor engine sipping away at the battery.

As is so often the case with chunkier laptops, the Latitude 5500's girth does have the upside of making more room for ports. Here, the haul includes three full-size USB 3.0 ports, one USB Type-C port with Thunderbolt 3, one HDMI output, one microSD slot, one smart card reader (yet another boost to security), one collapsible Ethernet port, a 3.5mm mic and headphone jack and a Kensington lock slot. There also appears to be an optional SIM card tray for always-on connectivity, though this wasn't included on our model.

Having multiple video outputs is always useful, as is the option of a more stable wired Ethernet connection - though of course, you still get 802.11ac Wi-Fi and Bluetooth 5.0. There's even an NFC tag to the right of the touchpad, rounding out an impressively comprehensive set of connections.

Besides all the security features, the Latitude 5500's business-friendliness also manifests in its choice of Windows 10 Pro as the OS - a version with far more baked-in IT management tools than Windows 10 Home - as well as the vPro CPU.

This, then, is a clearly well-featured and demonstrably high-performing professional laptop - and not an overly expensive one, considering both these qualities. Even so, it's simply not as pleasurable or as productive to use as a truly great laptop should be.

The keyboard is a constant source of frustration, with its narrow keys and undersized functions, and the size of the display only serves to emphasise how underwhelming it is to look at. Regardless of whether this is intentional corner-cutting or just some design oversights, they downgrade the Latitude 5500 from a distinguished clamshell to merely a decent one. And that's unfortunate, as the swift internals and extensive security tools are otherwise an attractive proposition.

Enterprise users will appreciate how secure, fast and long-lasting the Latitude 5500 is, but a long feature list and strong benchmark results won’t mask everyday usage problems for long – and the keyboard and display are the worst offenders