A limited-edition laptop with bright design, loads of power and specification enhancements 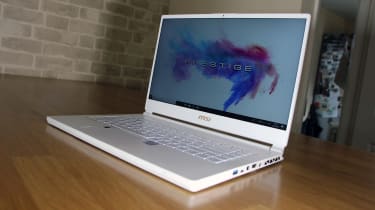 The MSI P65 Creator 8RF is one of the most eye-catching productivity laptops around - even among a market that's filled with good-looking machines.

That's because this 1,416 exc VAT machine is a limited-edition version of the P65, which means a white finish, a smart wooden box on arrival and some specification upgrades.

The bright white metal throughout is disarming: it's bolder than virtually all other work machines, and even looks more outlandish than some gaming laptops. The white finish isn't the only extravagant design flourish; the sides and rear are covered with angry, angular heat vents, and a neat hexagonal speaker grille sits above the keyboard.

It's certainly flamboyant. However, hands-on time reveals potential issues. The base is strong, but the screen is weaker - we'd use a protective sleeve. And there are more visible seams around the edges of this laptop than on many rivals, like the Dell XPS 15 and Apple's MacBooks.

The MSI weighs 1.9kg and is 18mm thick, so it's not overly chunky for a 15in workstation-grade device - but this is another area where the P65 falls behind sleeker rivals, with slimmer and lighter laptops easy to find in the wider market.

Around the edges you get three USB 3.1 ports, headphone and mic jacks and HDMI and mini-DisplayPort outputs. This limited-edition machine also has a Thunderbolt 3 port that supports USB 3.1 and DisplayPort - something normal P65 machines don't include. 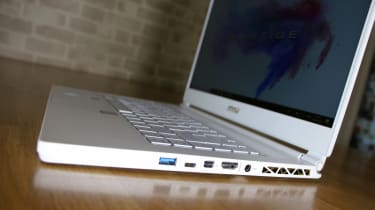 Connectivity is good: you get dual-band 802.11ac wireless and Bluetooth 5.0, and MSI's machine includes a full-sized Gigabit Ethernet port. That's a pleasing and increasingly rare addition in a market where laptops are getting slimmer, and ditching wired internet as they go.

MSI's keyboard is fine: it's fast and responsive, with acceptable travel, and its action is crisp and robust - it's snappy and clinical rather than too soft, and easily solid enough to handle long work sessions.

However, it's not perfect. The MSI has no numpad, its Return key is single-height, and the cursor keys are squeezed into the main body of the keyboard with no separation. Users will soon become familiar with these quirks, but they're irritating at first.

The trackpad is good, though. It's large, smooth and responsive, and has full gesture support as well as a built-in fingerprint reader.

This limited-edition P65 is the only version with a 144Hz screen. While having a higher refresh rate has limited usefulness when working, its smoother motion will help in some scenarios - like animation. It's also handy for gaming.

The screen itself is a 15.6in 1,920 x 1,080 IPS panel, and if you want 4K, you'll have to spend a lot more. Quality levels are generally capable; the MSI returned an impressive contrast ratio of 1,304:1, with a peak brightness level of 274cd/m2 and a black point of 0.21cd/m2. The contrast is high enough to ensure good punch and clarity, while the black point delivers solid, inky depths. The brightness level is fine for the office and for photo and video work, but it's not high enough to enable solid conditions while working outdoors. 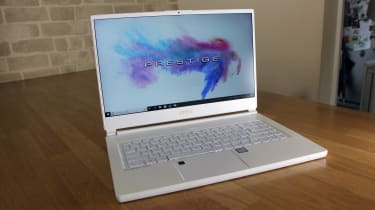 The MSI's colours are middling, too. Its Delta E of 3.26 is average, and its colour temperature of 7,770K is cold, making images appear pallid. It also only handled 83.8% of the sRGB colour gamut.

The P65's screen isn't perfect, then, but its contrast and colour levels are still good enough for basic colour work - and it does have its 144Hz refresh rate. However, if you're looking for pure image quality, the XPS 15 is a better option thanks to superior contrast and colour accuracy throughout.

Under the hood the MSI relies on a Core i7-8750H processor and a GeForce GTX 1070 Max-Q graphics core. That hardware is from Intel and Nvidia's older ranges, but we're not hugely concerned - Intel's newer processors are only marginally quicker, and the last-gen graphics core remains powerful.

The i7-8750H is a six-core chip with Hyper-Threading and base clock speeds of 2.2GHz. Its replacement, the i7-9750H, also has six cores and runs at 2.6GHz. Both use the same architecture, so differences are minimal. The GPU still has a whopping 2,048 stream processors and 8GB of dedicated memory, so it's no slouch even when compared to newer chips. Those core components are paired with 16GB of memory and a 512GB SSD.

It's a solid loadout at this price - Dell's current models use the newer i7-9750H CPU, but they still rely on a weaker graphics core and they're still more expensive than the MSI. Apple's machines, similarly, use 9th-gen processors but are poorer in the graphics department - while still arriving at a higher price.

The MSI is quick. By default, it runs in its Sport mode, and here the MSI returned a benchmark score of 170. That's enough to handle intensive photo-editing and video work without a struggle; just eight points behind the Dell and three points behind last year's Apple MacBook Pro. 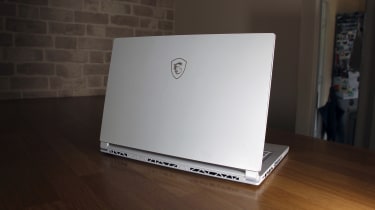 MSI's system also has Comfort and Eco modes. The Comfort option didn't make much difference - the MSI still returned a benchmark score of 169 thanks to miniscule changes to clock speeds - but the Eco mode limited clock speeds dramatically and dropped the benchmark score to 150, so avoid this mode if you want to use demanding applications.

The SSD's reasonable read and write rates of 1,606MB/sec and 1,035MB/sec are enough to keep Windows feeling snappy, and there are no thermal issues on this machine - there's a bit of fan noise during tougher tasks, but it's not intrusive and the exterior doesn't get too hot.

On top of that, the MSI is graphically impressive. Whether you want to handle photo work, video tools or gaming, the GTX 1070 Max-Q will handle it. And, like with the CPU, there's barely any performance difference between the MSI when running in Sport and Comfort modes.

This laptop has an 82Whr battery, which lasted for 8hrs and 23mins in our video test. That's a solid result - almost an hour better than the XPS 15. There's certainly enough battery life to last a full day in some work situations, although that figure will be reduced if you run the screen at a higher brightness level and rely on apps that really strain the CPU and GPU. If that's the case, you won't make it through a day at work without plugging in.

The MSI P65 doesn't have the finesse or the screen quality of rival machines. If you're concerned about having more brightness, better colours and a slimmer, lighter and more mature design, opt for the likes of the Dell XPS 15 or the larger MacBook Pro. However, there's still loads to like about the P65. Its screen still has enough quality to handle photo and video work unless you're particularly discerning - or if you rely on Adobe software.

Elsewhere, the P65 has impressive CPU ability, more GPU power than rivals, and good components throughout. It's ergonomically sound, with decent battery life, and its prices are competitive. If you're fussed about power and value rather than style and screen quality, the P65 is a solid option.

Better screen quality and physical design can be found on more expensive rivals, but the limited-edition P65 has the power to handle creative software alongside good ergonomics throughout