Microsoft Surface Pro 7 hands-on review: The best 2-in-1 ever? 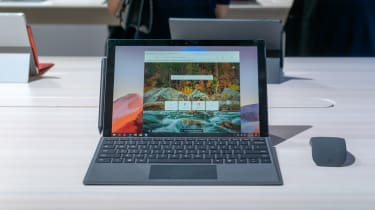 Spare a thought for the poor Surface Pro 7; once the crown jewel of Microsoft's first-party hardware, the launch of the latest iteration has been somewhat overshadowed by news of the long-rumoured 'Surface phone', a foldable tablet and a Snapdragon-powered Surface Pro.

There are some very good reasons why you should be paying attention to the surface Pro 7, however. Not only has it fixed one of the range's biggest and most glaring issues, it's also beefed up its performance capabilities with some seriously promising internal hardware. It's available to pre-order now and hitting shelves 22 October, with a starting price of $749 - so what does it have in store?

Microsoft evidently hit on a winning formula with the design of the Surface Pro range, and it has remained largely unchanged for the past several years. The Surface Pro 7 does not break with this tradition, and you may struggle to tell this device apart from its predecessor by looks alone. There's one key difference in terms of the available ports - which we'll talk more about later - but beyond that, it sports the same smooth planes and sharp angles that have defined the Surface Pro for years.

It's practically identical in terms of size and weight, too. It's 8.3mm thick with a weight of 775g (or 790g for the Core i7 version), which sounds nice and lightweight, but bear in mind that this doesn't take the TypeCover into account. With that included it goes up to around 1kg in weight and roughly 13mm thick - not exactly bloated, but not as featherweight as it appears. 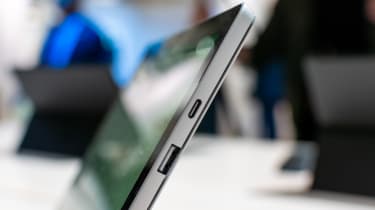 Still, that's a relatively small gripe and on balance, the Surface Pro 7 is still one of the best-designed 2-in-1s on the market. It looks sleek, professional and distinctive, and it's portable enough to be convenient without sacrificing any of its reliability or functionality.

There's not much to say about Pro 7's screen; it's still a 12.3in panel with a 2,736 x 1,824 resolution, so not much appears to have changed on the technical front. However, the same was true of the Surface Pro 6, and that display still managed to score slightly worse than its predecessor for visual quality.

The display has traditionally been a high point of Microsoft's Surface devices, so hopefully the company has managed to address this with the Pro 7. Initial impressions are good - brightness, clarity and colour representation all look strong - but it's difficult to say for sure without properly testing the display with a colourimeter.

Again, there's very little to say here that we haven't said about the Surface Pro 6's TypeCover and Surface Pen accessories, as they don't appear to have changed particularly. Both still offer an excellent experience; the Pen is fantastically sensitive for detailed graphics work and the keyboard - including 1.3mm travel distance - is the most satisfying typing experience we've seen on a 2-in-1 to date.

The biggest change is that the Pen and TypeCover are now available in a range of additional colours, including 'Poppy Red', 'Ice Blue' and 'Light Charcoal'. The new red accessories are particularly eye-catching, and they're all backwards-compatible with previous Surface devices.

Last year's Surface Pro bumped the processor from dual-core to quad-core, but the newest model looks set to offer another significant change. That's because it will come with Intel's latest 10th-gen Ice Lake processors - the first of its new 10nm range. That promises a fairly major speed boost, and although it's hard to know exactly how much, we're expecting it to be very snappy indeed. 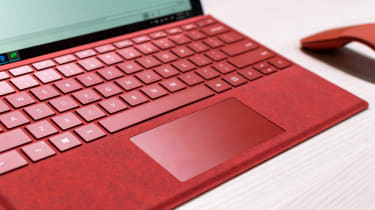 The Surface Pro 7 will come in Core i3, i5 and i7 variants, and the version we tried featured an quad-core Intel Core i7-1065G7 chip. It's rather gratifying to see the Core i3 configuration added back in, after the previous generation saw the removal of the more budget-friendly Core m3 option.

It's not confirmed what the specific impact of shifting to 10nm will be, but Microsoft is claiming 2x better graphics performance from the i7 variant - thanks in part to its Iris Plus integrated graphics. Unlike the other models, the i7 is fan-cooled, but we'll have to wait and see whether that's enough to combat potential throttling issues.

RAM allocations range from 4GB to 16GB of 3,733MHz LPDDR4 memory, with between 128GB and 1TB of SSD storage. Unfortunately, it's hard to get a true sense of how performant the Pro 7 is based on the limited time we had with the device, but as one of the first real tastes of Intel's long-awaited 10nm chips, there's a significant weight of expectation on its shoulders.

A new generation of Intel silicon is certainly exciting, but in truth, we're at least as excited about the other major change - the one that we alluded to earlier. That's right, Microsoft has finally joined the rest of us in the year 2019 and added USB-C to the Surface range. Replacing the old (and somewhat obsolete) Mini DisplayPort connector, the Pro 7 now has a USB-C 3.1 Gen2 connector, while also gratifyingly keeping the full-size USB-A port as well.

The USB-C port doesn't support Thunderbolt 3, sadly - Microsoft is still steering customers towards its proprietary Surface-branded docking stations for high-speed data transfer - but it does provide the full gamut of power, data and display transfer capabilities. This is a huge feature for businesses in particular, enabling agile working and hot-desking scenarios as well as allowing for increased consolidation of peripherals and connectors. The previous Surface got a well-deserved dressing-down for omitting USB-C, so it's gratifying to see Microsoft finally coming to its senses. 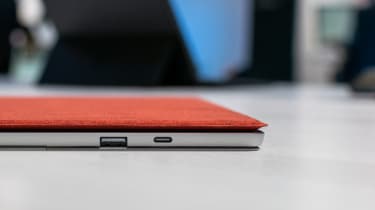 Elsewhere, there are two new 'Studio Mics' - a pair of far-field microphones designed to hone in on speech while eliminating background noise, for the purposes of improving the quality of things like video calls. Again, this will be a bigger relief to business users than anyone else. Improved stylus support has also been introduced to Office 365 alongside the Surface Pro 7, allowing users to write directly into Excel spreadsheets and edit word documents via inked notations - but these aren't necessarily specific to the Pro 7.

In many ways, the Surface Pro 7 feels like an indication that Microsoft has reached the limits of what it can do with the traditional Surface Pro design. While Intel's 10th-gen processors could offer a substantial performance boost, outside of the internal hardware, the iterative changes are getting smaller and less impactful with each successive generation. With the introduction of USB-C, Microsoft has fixed the Surface Pro's only real flaw, which begs the question - where is there to go?

The newly-announced Surface Neo and Surface Pro X may provide some clue as to the answer, but while the Surface Pro 7 may represent the culmination of Microsoft's flagship range, it still looks like an outstanding piece of hardware. It will have to prove its mettle in our benchmarks before we can say for certain, but ba