How to connect one, two or more monitors to your laptop, including USB Type-C

The definitive guide to connecting one, two or more monitors to your laptop 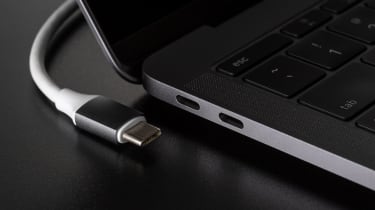 Although more and more of us are choosing a laptop or 2-in-1 convertible as our daily driver, there are times when you need the biggest screen, the highest resolution, or perhaps you just need more real estate than the built-in display offers.

Luckily, hooking your laptop up to a monitor (or two, or three, or even four) can bring you the best of both worlds. The advantages of a second screen are huge. Perhaps you want to keep your Slack window open all the time, or maybe you want to be able to refer to source material alongside a document you’re editing.

Windows users should find this a cinch because most of the work is done by the operating system. But before we come on to that, we need to talk about cables.

There are five main types of connectors in circulation for monitors in 2020: VGA, DVI, HDMI, DisplayPort, and USB-C.

If your only option is VGA, the chances are you have a seriously old piece of hardware. If your monitor doesn’t have a VGA port too, you may find that this isn’t going to work for you. It’s also worth mentioning that VGA cables don’t carry sound, so you’ll need to rig up a jack plug too. There are converters from VGA to HDMI but they tend to cost quite a lot of money for a mediocre result.

In short, if you can avoid VGA, do. We won’t be getting further into it here, because its technical limitations don’t really make it a good choice for a modern workstation.

DVI is similar to VGA but is capable of far higher resolution. Using a converter from DVI to HDMI will garner better results than VGA, but it’s still not ideal.

HDMI should be familiar to most people, as it’s the standard connection used by most televisions. There are variants though, so be aware. There are mini-HDMI and even micro-HDMI connectors, as well as full size, so make sure you pick the right cable.

Additionally, we’d recommend getting a new HDMI cable unless you’re confident that yours is pretty new. The HDMI specification has changed over the years and older cables may not give you 4K, or even HD. Look for HDMI 2.0 or HDMI 2.1 for the best performance, though anything over 1.4 should work. Unfortunately, most HDMI cables don’t tell you what version they are, so if you’ve got one lying around, it may not be good enough.

Don’t spend ridiculous amounts of money either; HDMI cables are digital, and so either they work or they don’t. You won’t get better quality from fancy bells and whistles like gold-plated connectors, and buying a cheap one with the right spec (we bought 3x1m cables from Amazon for under a tenner) will work just as well as an expensive one.

DisplayPort (we recommend at least 1.2 or higher for best results) is the choice of graphic designers, animators and other creative types. If your monitor uses Displayport, but you only have HDMI on your laptop, that’s no problem, as there’s a cable for that.

Finally, USB-C is the newest kid on the block, and is designed to replace all the other standards we’ve mentioned. As well as carrying power and connecting accessories, the USB-C standards include both DisplayPort and HDMI, so you’ll want either a USB-C to HDMI/DisplayPort or, if you have a very new monitor, USB-C to USB-C.

A quick warning: USB-C cables vary dramatically. In the early days, a number of manufacturers produced cables that didn’t comply with the specifications and caused serious damage to machines. If you’re at all unsure, look for cables that are USB-IF certified (though many perfectly good ones don’t carry this certification).

So you’ve got your cable and you’ve connected it up. You may well find that Windows has done the rest for you, and your monitor is now duplicating everything on the built-in screen.

That may be what you want, but if you are looking for extra space, you’ll want to press WIN+P and a sidebar will appear offering to display on just the main screen, just the monitor (called ’second screen’), Duplicate, or Extend.

Select extend and you should find that you can drag your mouse from one desktop to the other seamlessly. (Note: Windows 7 users aren’t offered this sidebar, you’ll need to do everything in the control panel - see below)

Windows will assume that the laptop is on the left and the monitor is on the right. If that’s not your setup, the mouse will go the wrong way, and that’s the sign for us to do a bit of tweaking.

The settings menu is very easy to get to. Simply go to the desktop, right-click anywhere and select ‘Screen Resolution’. The Control Panel menu that pops up includes numbered boxes. These represent your monitors, with ‘1’ being your built-in display.

Simply drag and drop the monitors so they appear on the screen in the same configuration as they do on your desk. You don’t even have to keep them in a row - if you have your laptop below your monitor, no problem, just drag it below Box 2.

There are loads of other settings on this screen, most of which you’ll never need, but feel free to experiment - most operations will ask you to confirm everything is ok, and if you don’t respond within 15 seconds reverts back. This is to ensure that if you’ve managed to lose the picture on both screens, you’re not stuck.

USB-C has one specific disadvantage, and it’s the fact that many laptops have a limited number of USB-C ports. In that case, you may find you’ll need to get a USB-C hub to widen your options. Make sure it has a passthrough for the power supply, and ideally an extra USB-C port too. Many hubs also have an HDMI connection for added versatility.

Now, you may be wondering, if USB-C is supposed to replace everything else, why it’s not even more common. The answer comes, once again, from manufacturers playing fast and loose with the standard.

In fact, USB-C ports have different capabilities. Early ‘gen 1’ ports only carry USB 2.0 signals, which isn’t enough for a decent monitor. More modern ‘gen 2’ ports carry USB 3.0 or 3.1, as well as support for Displayport and HDMI signals. Unfortunately, if you don’t know what you have, your options are either the operating instructions, some intelligent Googling, or simple trial and error. The rollout of USB-C has been rather messy and it’s impossible to tell the difference by sight.

But what if you want more than two displays? Again, it’s going to depend on your machine, your graphics card, and how much you want to spend. Sometimes, particularly on older or low spec machines, you’ll be limited to one extra monitor, but other, newer ones will let you connect up to four.

For example, Displayport connections will support splitters, letting you connect to multiple monitors from a single port on the laptop - but it’s not a particularly cheap way of doing it.

Some monitors have an extra port to allow you to ‘daisy chain’ the signal from the laptop to monitor to monitor, but they’re the exception, rather than the rule.

Then there’s the simple ‘all-hands-on-deck’ approach. If you’ve got a laptop (or a hub) with a USB-C, HDMI, DVI and Displayport, you can mix and match your monitors - but remember to choose the best input for each monitor’s specifications so you get the maximum resolution and refresh rate out of each.

It’s not uncommon to find that the evolution of computing standards can make the result you’re trying to achieve fraught with potential pitfalls. And so it is with monitors. Displayport, HDMI and USB-C all have variants that aren’t always clear to the casual user, and so often something that should be a case of ‘plug this into this’ is actually quite fiddly. Don’t be put off though - do your research on your devices and make sure you buy the right cable. Once you’ve done that, the rest is pretty simple.