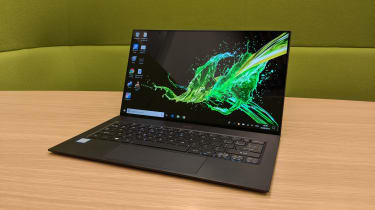 14in laptops quite simply don't come smaller than the Acer Swift 7. At 10mm thin it's almost as svelte as a smartphone, and it's noticeably short too: just 192mm from front to back.

Add the fact that the whole thing weighs a mere 890g, and the Swift 7 already looks untouchable on portability. Temper your excitement, though - with any piece of tech hardware, slimming down to such extreme extents will always mean cutbacks and compromises. Let's take a closer look to see how this feathery ultraportable has dealt with them.

Even if it were a few millimetres thicker, the Swift 7 would still have the plush feel of an expensive laptop; the all-metal chassis looks smart and has a pleasant matte finish. Furthermore, its tighter height and width has been achieved with the aid of some extremely thin display bezels, with even the chunkiest bottom edge still having a slimline border.

This does have the unfortunate effect of punting the webcam down onto the base, where it sits above the keyboard. Much like the Huawei MateBook X Pro, which disguises its camera as a function key, it's got a quite neat push-release, pop-up mechanism - which doubles as a privacy filter when the camera's not in use - although the low angle means anyone on the other end of a call is more likely to get a view of your chest and chin than your face. There's no way to adjust the angle, either.

Much better is the fast and reliable fingerprint sensor, which is positioned on the left side of the keyboard and is built into the well-disguised power button. This is, it should be noted, the only major security feature on the Swift 7; the camera doesn't support facial recognition, there's no smart card reader, and the operating system is Windows 10 Home rather than Windows 10 Pro, so you don't get features like BitLocker encryption out of the box. 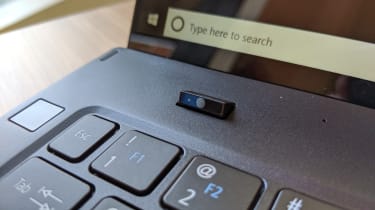 We're also slightly concerned about how the base flexes slightly when picked up from a corner. A bit of bendiness is common on ultra-thin laptops, but that mainly occurs around the screen, not the base. That's not to say the Swift 7 is poorly made, as it comfortably endured multiple commutes, but its slimness does contribute to a certain lack of solidity.

Even if it's not got the most rigid housing, the 14in 1,920x1,080 touchscreen meets a very high standard. The IPS panel confers both wide viewing angles and vibrant, yet accurate, colours: sRGB coverage is closer to good than great, at 93.4%, but we measured an average delta-E of just 1.42, so the colours you see are being reproduced faithfully.

A respectable peak brightness of 330cd/m2 also helps alleviate the reflective effect of the screen's glossy finish, and the 1,502:1 contrast ratio isn't half bad either. There's really nothing to complain about, display-wise.

The keyboard, on the other hand, takes some getting used to. This is mainly down to a few oddities rather than fundamental issues, as most keys are - if a little on the smaller side - intuitive enough to find and use, with shallow travel but a firm response. The whole board is backlit, too.

It's not even a particular faff to have the Function keys folded into the number keys. However, there are considerably more annoying encroachments: a tilde key, for example, is crammed between Caps Lock and the A key, making the former infuriatingly undersized and difficult to land when touch-typing. Backspace also loses a chunk of itself to a Delete key, while Enter has been bisected to make room for a Backslash key. 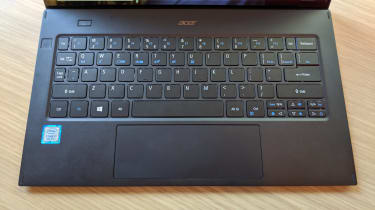 We will say that, after nearly two weeks of usage, we've just about learned to deal with these quirks, but this is still a case of the Swift 7's downsizing having an adverse side-effect. The touchpad, at first, seems in danger of the same fate: it's exceedingly wide, but very short, and we've often brushed a finger against the chassis at the top.

In practice, though, this isn't anywhere near as off-putting as the keyboard's misshapen keys. The smooth surface and dependable responsiveness of this touchpad makes it perfectly fine as a primary input, even if it is somewhat squat.

Internally, the Swift 7 packs an Intel Core i7-8500Y, 16GB of RAM and a 512GB SSD. To be blunt, nearly 1,500 is an almost galling amount to ask for something with a dual-core, Y-series processor, but then we suspect the Swift 7 is so thin that anything more powerful - in other words, anything that would require additional cooling - wouldn't fit.

Either way, don't expect to be cruising through Blender on this laptop. It managed a passable 65 in our 4K benchmarks' image test, but scores of 35 in the video test and a paltry 9 in the multitasking test brought its overall score down to 27. That represents a mere fraction of the performance offered by U-series ultraportables like the Dell XPS 13 and Asus ZenBook 14 UX433FA, and the HP Spectre Folio - which has the same processor - scored 45 by comparison. Even the previous Swift 7 did better, scoring 37 with its Core i7-7Y75.

Judging by both the new Swift 7's low image test score (the Spectre Folio managed 82) and the fact that its chassis heats up considerably under heavy load, we're going to point the finger at thermal throttling; the image test relies heavily on single-core power, and reduced clock speeds would have a stronger effect than the lack of cores. In any case, it's hard to recommend running anything more demanding than browsers and basic office software, as multithreaded applications will slow it right down. 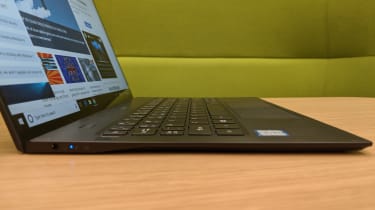 The SSD is also unremarkable by NVMe standards. Capacity is good, but we only recorded sequential read and write speeds of 1,350MB/sec and 687MB/sec respectively - although in fairness, slower write speeds are perversely common on ultraportables. The otherwise excellent XPS 13, for example, hit a 2,224MB/sec read speed but only a 444MB/sec write speed.

Battery life is adequate. The Swift 7 lasted for 9hrs 17mins in our video playback test, which is a creditable result. However, we noticed it draining a lot quicker when used at max brightness - our battery benchmark runs at 170cd/m2 - so turn it down and you'll be able to eke out a few extra hours.

Another drawback of the Swift 7's skinny frame is the lack of connections: you only get two USB-C ports and a 3.5mm audio jack. To Acer's credit, both USB-C ports support Thunderbolt 3, so you've got video output capability, and there's also a little hub bundled in that includes a USB3 port, another USB-C port and a full-size HDMI output all in one.

Still, there's also the matter of the power cable connecting via one of those very same USB-C ports, so you'll always be down one when recharging. The lack of an SD card reader might also sting, and there was never any hope of fitting full-size USB ports on a laptop this thin.

Once the initial thrill of using a sub-900g laptop wears off, it's clear that the Swift 7 mainly suits a very, very specific type of user: one who will only be performing relatively basic tasks, but still wants something as thin and light as it's possible to get without massive reducing display size.

Interestingly, it's Acer itself that could provide a better middle ground. The upcoming Swift 5, first revealed at IFA 2019, will be much cheaper than the Swift 7 but also similarly light, with more varied connectivity and a faster 10th-gen Intel processor. We'd recommend waiting for that.

What price a laptop under 1kg? The Acer Swift 7 is beautifully compact, though balancing this with performance and practicality proves to be tricky.