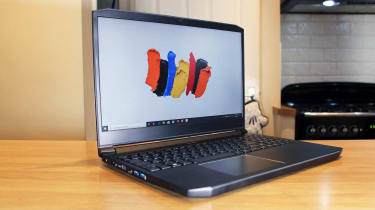 The Acer ConceptD range made a big splash when it was announced in April, and now the first machines are arriving on shelves.

This 2,250 exc VAT ConceptD 5 Pro is one of the beefiest and most expensive machines from the new range, which means it's ready for high-end creative tasks like 4K video editing, photo-editing and professional design.

The ConceptD 5 Pro has a shell made from sturdy magnesium alloy alongside smart, subtle new logos. The corners have neat angles, and there are no unsightly stickers.

It's a good start, but closer examination reveals small issues. Much of the ConceptD 5 Pro's design is borrowed from Acer's gaming laptops, for instance, so you're not getting a brand-new laptop here - and it also means you get ugly, angular exhaust vents that look out of place on a professional machine.

There are obvious, visible seams around the borders of this machine too, and the base edges are uncomfortably sharp. Build quality is inconsistent throughout, in fact. The base section is strong, but the lid is too easy to flex back and forth. A sleeve is advisable to keep this machine safe.

It's an unconvincing start among strong competition. The MSI P65 Creator 8RF is an impressive recent arrival that had smarter, sleeker design than the Acer (despite its gaming-focused heritage), and the Razer Blade 15 and 15in Apple MacBook Pro are both perennial challengers, with market-leading design and admirable build quality.

The Acer tips the scales at 2.2kg, and it's 21mm thick. Those dimensions aren't great: every rival is a few hundred grams lighter and a little slimmer. 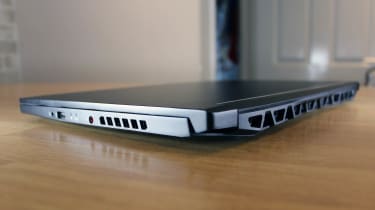 The Acer also has mediocre connectivity. The ConceptD has two USB 3.1 ports and a Type-C connection, but its third full-size USB port uses the slower USB 2.0 standard. It's got a Gigabit Ethernet socket and an HDMI output, but it's missing Thunderbolt, DisplayPort, a card reader and a fingerprint reader. Those are notable omissions on a machine designed for creativity and productivity.

On the inside, you get super-fast WiFi 6 and Bluetooth 5.0, so that's a better bill of health.

The Acer's design is disappointing when its price is considered, too. The MSI is currently available with a slower RTX 2060 graphics core for just 1,750 exc VAT. The Razer has great design and costs 2,142 exc VAT for an RTX 2070 and a 4K screen.

The MacBook Pro is a design leader, as usual, although beefing up its specification to match the Acer means that it costs 3,045 exc VAT - hardly a surprise.

The ConceptD has a chiclet keyboard, and the layout is good. There's a numberpad, a solid range of options on the function row, and none of the major keys have been reduced in size.

The sturdy build quality on the Acer's base means the keyboard is underpinned by a strong plate of metal - in turn, that means you can hammer the buttons with consistency and force. 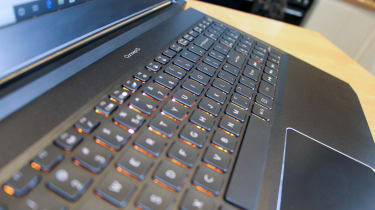 The buttons have ample travel and speed, and they're pleasingly quiet. It's easy to use this typing unit for long periods while still being comfortable and without making any mistakes.

The trackpad is good too. It's large, with a smooth surface that offers precision and has full gesture support, and its two buttons are rapid and responsive.

The screen is crucial for a design laptop, and the Acer starts well. Its 15.6in diagonal is paired with a 4K resolution, which means a density level of 282ppi. That's huge, which means the screen offers tremendous detail and crispness - and there's room for multiple windows if that's important.

The Delta E of 1.9 is stellar - it's below the point where human eyes can detect colour accuracy deviations, so colours will be near-perfect. That's paired with a temperature of 6,329K, which is close enough to the 6,500K ideal to avoid any issues.

Acer's screen returned sRGB and Adobe RGB gamut coverage levels of 99.8% and 98.9%, so you can easily work in both of these colour spaces.

The brightness level of 385cd/m2 is high enough for anything, the black level of 0.26cd/m2 is suitably deep, and the contrast ratio of 1,480:1 is great - better than most laptops, and high enough to deliver depth, vibrancy and accurate images in any situation. 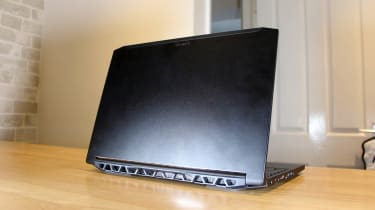 The Acer's screen is just as good as the Razer and Apple offerings and noticeably better than the MSI panel. It's easily good enough for creative and colour-sensitive work, which is fitting for a machine that's explicitly aimed at creative professionals.

The speakers have impressive volume and lots of high-end clarity, but the mid-range is a little muddy and the bass is minimal. They're fine for casual media playback, but not good enough for work.

The RTX 3000 has 6GB of dedicated memory and 2,304 stream processors. Because it's a professional chip, it has ISV certification - which means that dozens of prominent professional applications are tested to ensure that they run smoothly.

The professional GPU is joined by the popular Core i7-9750H. Its six cores mean that there's enough versatility for multi-tasking and work applications. Its base and boost speeds of 2.6GHz and 4.5GHz are excellent, enabling rapid performance in single-threaded scenarios, like Office tools, web browsers and some photo-editing apps.

The Acer's overall benchmark score of 171 edges the MSI machine, beats the Razer and is barely behind recent MacBook Pro notebooks. That great result it means that the Acer will have no problem handling photo editing, video work and design tools. You're only going to need more power if you're running intense 4K video tools, database applications or CAD software. If that's the case, a Core i9 chip will deliver a benchmark score of around 200. 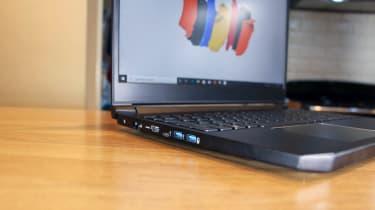 The RTX 3000 GPU scored 190.56fps in the Cinebench OpenGL test - a benchmark that illustrates graphical grunt in work-focused tasks. That's fantastic - the RTX 2070 and RTX 2060 tend to score around 120fps and 110fps respectively in the same test.

The core components are bolstered by a whopping 32GB of memory - twice as much as rivals. The main boot drive is created by two 512GB SSDs in a RAID 0 array that provide 952GB of formatted space - alongside read and write speeds of 3514MB/sec and 3153MB/sec. That speed beats every rival, and it means that application and file loading times are excellent.

It's worth noting, though, that the use of RAID doesn't translate to any data protection or failover capabilities. RAID 0 delivers great space and speed, but it doesn't mirror data - so if one SSD fails, all data goes with it. This isn't a negative - after all, no other laptops feature RAID redundancy - but don't be lulled into a false sense of security.

The Acer's thermal performance was inconsistent. Graphics temperatures are fine, noise levels are pleasingly modest, and the exterior doesn't get hot. However, the CPU throttled to 2.4GHz after a short period of 100% load, and a full-system stress-test saw the CPU throttle to 1.5GHz.

This will only be a problem if you plan to run the CPU at 100% load for prolonged periods of time - unlikely in most situations. Despite that, it's worth remembering if you do want to push the chip.

The battery is middling. In our video test the Acer lasted for five hours and 14 minutes - three hours short of the MSI and Apple laptops. This isn't unusual for a high-performance machine (especially one with a 4K screen), but if you're pushing the components hard, you won't make it to lunchtime.

The Acer ConceptD 5 Pro offers lashings of power thanks to its pro-level GPU, Core i7 CPU and impressive storage and memory - so it can tackle virtually any work task, from tough photo-editing and design to 4K video editing. 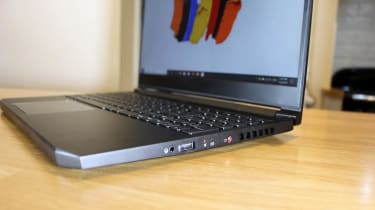 Elsewhere, the 4K screen is fantastic, but the Acer falters when it comes to battery life and thermal performance.

The Acer is only middling on the outside too. Its keyboard and trackpad are good, but its design is underwhelming, its port selection could be better and it's thicker and heavier than competitors.

It's certainly not the most stylish laptop around, and it's not the best option for longevity. If those are important, the MSI and Razer machines are cheaper, and Apple's machine is more expensive but it does offer market-leading design.

However, Acer's machine does deliver huge power and superb screen quality for less than Apple's laptops - and it offers more power than the MSI and Razer machines. If performance is a key consideration, the Acer ConceptD 5 Pro is a firm contender.

This Acer machine has huge performance levels, a great screen and a solid keyboard, but its design, connectivity and battery life can’t quite compete with stronger competition