An £800 laptop with an Intel Core i7 processor and discrete Nvidia graphics card. Is the S50t a bargain? 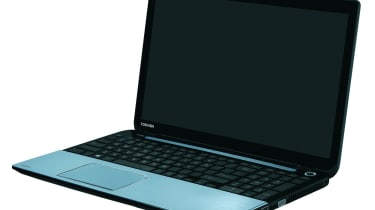 The Toshiba Satellite S50t-A-118 doesn't have slim-line dimensions or a pretty chassis but it does have a top-draw specification. For 800 you get the latest Intel Core i7 processor, a discrete Nvidia GPU and 6GB of DDR3 RAM.

The star component is the Core i7-4700MQ processor. The "MQ" suffix means this part is a mobile quad-core chip, and its 22nm Haswell architecture provides enough grunt for anyone considering a desktop replacement.

Turbo Boost means the factory 2.4GHz speed can be overclocked to 3.2GHz across every core or 3.4GHz on one core. Hyper-Threading also allows for eight concurrent tasks to be addressed simulataneously. It's got 6MB of L3 cache, and its 47W TDP is half the power needed by top desktop chips. 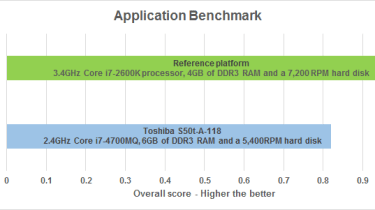 The Haswell chip was paired with 6GB of DDR3 memory and allowed the S50t to race through our application benchmarks to a score of 0.82. It's a result Ultrabooks dream of, and only beaten by powerful and expensive workstation laptops. The S50t will handle common business applications but it will begin to struggle with heavy-duty design and simulation apps.

Toshiba has a built-in discrete graphics core. Nvidia has two versions of its GeForce GT 640M, and the chip included in our machine had 2GB of GDDR5 RAM and a core with 384 stream processors clocked to 980MHz. It's faster than Nvidia's other GT 640M.

Graphical performance going to be better than anything else in this price-range and most Ultrabooks too. The Nvidia chip averaged 31fps in our Medium-quality Crysis benchmark when run at 1,920 x 1,080.

At the Toshiba's native resolution of 1,366 x 768 the chipset handled the game's High-quality options, with a just-playable average of 29fps. It's enough power to handle work and play and offers  performance levels in-between Ultrabooks and expensive workstations.

Toshiba has cut down on costs in the storage departmernt by using a 1TB hard drive. The Hitachi Travelstar 5K1000 returned sequential read and write speeds of 102MB/sec and 91MB/sec fast for a portable 5,400rpm part.

The S50t ticked all of the connectivity boxes with dual-band 802.11n Wi-Fi, Gigabit Ethernet and Bluetooth 4.0, but sealed battery didn't pull it's wait. Our light use benchmark simulated web browsing with the screen calibrated to 120cd/m2, and in this test the Toshiba lasted for a mediocre 6hrs 51mins. In the heavy use benchmark, which ran a multi-tasking test with the screen at full brightness, the battery life collapsed to 1hr 7mins. This makes it hard to recommend for portable work. 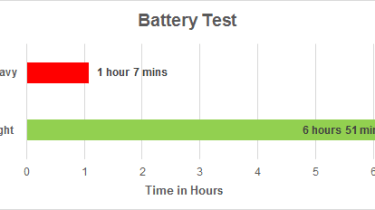 On a laptop packed with high-spec components we expected the 15.6in touch screen to offer a better resolution than 1,366 x 768. The size means work applications such as Photoshop feel cramped, and it's not big enough to comfortably multi-task with two windows side-by-side.

The LED screen suffers from low brightness too (180cd/m2) and delivers a mediocre contrast ratio of 404:1. This lack of contrast makes it difficult to pick shades apart and coupled with the dim screen colours appear oversaturated.

This particular Satellite shares styling with the rest of Toshiba's range: the wrist-rest and lid are coated with a thin layer of brushed aluminium, and the base, screen bezel and keyboard surround are clad in glossy black plastic.

It's not a striking design, and it's paired with iffy build quality. The wrist-rest is sturdy, and there's a moderate amount of flex in the lid. But the base is too flimsy and we'd recommend a protective case if you plan on carrying it around. The 2.6kg weight and 30mm thickness makes the S50t bulky and doesn't offer any of the portability associated with slim-line Ultrabooks.

The keyboard includes a number pad, and we like the full-size space bar and return keys. Toshiba has carried out some unnecessary tweaks to function key, which are going to annoy users. Alt+F4 can't be used to close applications because it defaults to Windows 8's Second Screen dialogue, and F5 now turns the trackpad on and off instead of refreshing the browser. 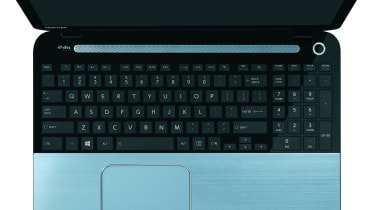 The keyboard's base is solid. We'd prefer the keys to be heavier and to have more travel, but it's comfortable enough for day-to-day typing. The trackpad is fine, with support for Windows 8's gestures and two clicky, light buttons along its bottom edge. 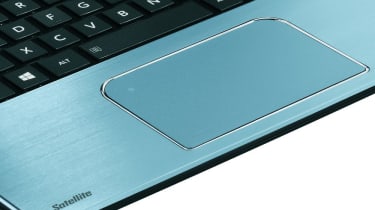 The range of ports and sockets is standard: two USB 3 ports, one USB 2 socket, an HDMI output, SD card reader and a pair of headphone jacks.

The speakers are average. They're loud enough to fill a sizeable living room, and the treble and high-end are sharp and accurate. The Toshiba lacks bass and it means the rest of the range sounds tinny.

The S50t is letdown by the lack of high-quality screen and poor battery life. The Core i7 processor and discrete graphics core are better than anything else at this price but only buy this if it's going to be plugged in all day and connected to high-res monitors.

The Toshiba Satellite S50t-A-118 includes a high-end Haswell Core i7 processor and a powerful Nvidia graphics card, but the mid-range price means this machine suffers elsewhere. Battery is poor, the screen is average, and the exterior isn't designed for portability.