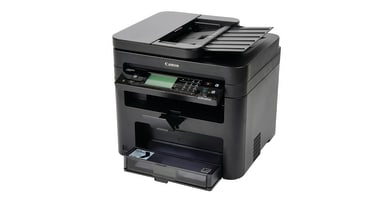 Not everyone needs colour. Few print jobs really need it, and there are definite advantages to sticking, as the i-Sensys MF229dw does, with mono laser technology.

One is speed. Our 20-page test document flooded out of the printer at an exceptional 22.4ppm. Throwing business graphics into the mix only slowed things to 16.9ppm, although of course pages were rendered in greyscale rather than colour.

Another is price. The MF229dw can't match the cheapest inkjets, but at 2.2p per mono page, it's much cheaper than lasers from the likes of Oki and Ricoh, coming out just a fraction behind examples from Lexmark and Xerox. And since you won't be printing colour, there are fewer consumables to buy overall.

Although the MF229dw only prints in mono, it scans in full colour - exceptionally well, in fact. We were blown away by how clean and detailed its output was. Disappointingly, its roaring print speeds don't translate to a fast scanning engine. A single greyscale page at 200ppi took 28 seconds to scan, and ten pages through the ADF took 87 seconds - slower than most other printers we could name.

As you would expect, print quality is better for text than graphics. Emails and documents were sharp and weighty, but greyscale dithering gave images a slightly stippled appearance, while gradients and skin tones come out in grainy bands. Still, the MF229dw's graphical output is perfectly good for reference.

For a laser, the unit is relatively compact - another benefit of the single-cartridge design - and although the low-res monochrome display looks distinctly clunky, the touchscreen interface is straightforward, with big, clear buttons to control the printer's various functions.

With its 250-sheet input tray and fast print speeds, the i-Sensys has obvious appeal for those who frequently deal in large print jobs. The price is high, though, putting Canon's i-Sensys MF229dw into contention with the Lexmark CX310dn and the Oki MC342dnw - both pretty speedy printers in their own right.

Unless you're certain you won't ever want to print colour, you may prefer to opt for one of those models, and sacrifice a few pages per minute for more creative flexibility down the line.

It's not cheap and you won't be able to print anything in colour, but if you're just looking for large-batch office printing and scanning, the Canon i-Sensys MF229dw will blitz through them with frightening speed. 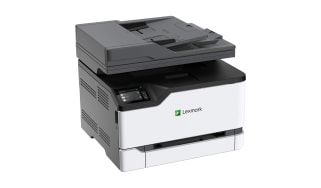 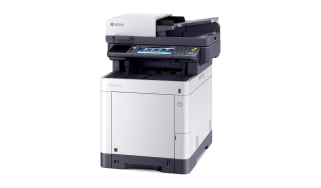