The open source operating system is still getting 4,000 new lines of code a day 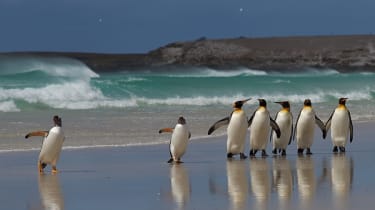 Today marks 25 years since Linus Torvalds sent out his industry-changing message, asking for help testing a new operating system he had devised.

On 25 August, 1991, he wrote: "I'm doing a (free) operating system (just a hobby, won't be big and professional like gnu) for 386(486) AT clones. This has been brewing since april, and is starting to get ready. I'd like any feedback on things people like/dislike in minix, as my OS resembles it somewhat (same physical layout of the file-system (due to practical reasons)among other things)." 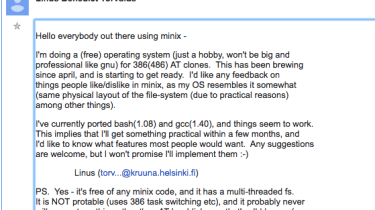 That operating system, Linux, went on to change the world of computing, becoming the major open source alternative to corporate giants like Microsoft's Windows OS.

Today, its reach is far and wide. For instance, Google's open source Android operating system is based on Linux, giving Linux the largest installed base of mobile users around the world.

Linux owes much of its popularity to its open source nature. Letting other developers tinker and tweak with the original OS has led to dozens of different commercial versions of Linux known as distributions such as Ubuntu, openSUSE, CentOS and Red Hat Enterprise Linux.

That innovation around the Linux kernel continues today. To mark the 25th anniversary, the Linux Foundation released a Linux Kernel Development report stats showing that more than 13,500 developers from 1,300 companies have contributed to the Linux kernel since 2005.

"Even after 25 years, Linux still serves as an example of how collaborative development can work, which can be applied to other open source projects," said Jim Zemlin, executive director of the Linux Foundation.

That development leads to a new kernel release every eight to 12 weeks, the report shows, with that time period striking a balance between providing enough time to find problems and being short enough that the workload does not become too unwieldy.

"Above all, 25 years of kernel history show that sustained, cooperative effort can bring about common resources that no group would have been able to develop on its own," the report concluded.