Kali Linux is a security-focused Linux distro based on Debian and is designed primarily for 'offensive security', which is a branch of cyber security that involves ethical hackers attacking businesses in order to expose flaws in their networks that can then be fixed, a process known as penetration testing.

The software comes pre-packaged with a variety of different command line hacking tools, including password crackers, packet sniffers and exploit tools. But you need to install it before you can make use of these pen-test treasures. Luckily, it's fairly simply to do that. Following the steps laid out on Kali Linux's open source project page, maintained and funded by Offensive Security, you can set up your machine with all the tools you need to perform a comprehensive pen test.

Firstly, if this is your first time using WSL, you'll need to update your Windows 10 machine to install it. You can do this by navigating to the Control Panel and go to 'Apps and Features', select 'Programs and Features' from the right panel and click 'Turn Windows features on or off' from the left menu. Select WSL and save it.

Alternatively you can open an administrative PowerShell window and install WSL by running the following command: Enable-WindowsOptionalFeature -Online -FeatureName Microsoft-Windows-Subsystem-Linux.

Whichever method you choose, Windows 10 will then reboot and you'll be able to then find, download and install the Kali Linux app in the Microsoft Store. 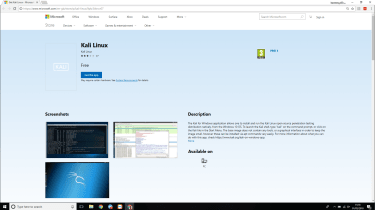 One you have launched the application, you'll need to create a default UNIX account as part of the installation process, and add a password. Once you do so, WSL will automatically complete the installation and open a new console window.

Kali Linux's open source creators advise users to run an upgrade to keep up with the latest packages, and to clean up the apt-cache to save space on your drive.

The official page also points out that due to the tools' pen-test nature, some antivirus software will identify them as malware. To whitelist Kali tools, Offensive Security recommends allowing antivirus exceptions on the directory Kali sits in.

Offensive Security's explainer has plenty more troubleshooting advice for running Kali Linux on Windows 10 if you experience any issues once you have it installed and running.