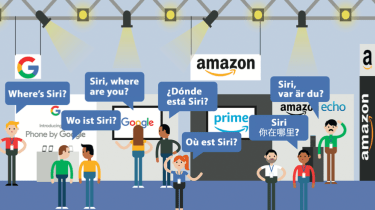 Apple never attends CES, the biggest tech show in the world, but the company's influence is felt. With accessories for iPhones, software for Macs and developers showcasing the latest apps for iOS, Apple is always there without actually being there.

This year, however, Apple barely flickered on the radar. Two companies dominated the show floor: Google and Amazon. If CES 2018 was a horse race, Apple would be heading off to the Pritt-Stick factory.

This year's Las Vegas tech beano was all about voice assistants the computerised butlers that have entered our homes in speakers, smartphones, smart TVs and a gazillion other devices. The tech world is determined to shoehorn Alexa or the Google Assistant into everything: mirrors, robots, coffee machines, deep-fat fryers and printers were among the hundreds of devices on show that came with voice assistants. How many of them were using Apple's Siri? Not a single one. At least, none that I saw in three days of pounding the halls.

So, how much of a problem is this for Apple? After all, the company has never been particularly keen to have its software running on other people's hardware you can't legally buy a computer running MacOS unless it's a Mac, for instance. And that's a fair stance, but Apple is in danger of becoming the siloed, high-end loner that almost put the company out of business 20 years ago.

Services such as Alexa and Siri rely on other manufacturers to support them. One of the reasons Alexa and now Google Assistant are breaking into households is because these cheap little speakers can be used to control anything from smart lightbulbs, to Netflix on your TV, to your thermostat. If Siri becomes a niche player, Apple's going to find it hard to convince other device manufacturers that it's worth their while making products that communicate with Siri.

Apple didn't even manage to get its fiercely expensive HomePod speaker out in time for Christmas. It was first announcedin June last year but is only now being released (on 9 February) with the stupidly high price of 319.

And it's not as if the other parts of the Apple empire have been wildly successful of late. The iPhone X's facial recognition has been an unmitigated flop, with people finally realising that unlocking your phone with your finger is 10 times easier than lifting the phone to your mush especially when you're wearing sunglasses, a bike helmet or trying to inconspicuously steal a glance at your notifications in a thunderously dull business meeting.

I know people who are scouring eBay for second-hand MacBooks, so put off are they by the frippery of the Touch Bar on the latest models and what it's done to their prices. Meanwhile, the iPad is suffering from a sector-wide tablet malaise (I can't recall a single tablet being launched at CES), smartwatches appear to be a passing fad and Apple is nowhere absolutely nowhere on TV.

Apple's not about to go bang. It's got enough cash in the bank to see out a nuclear holocaust and still have enough spare change to buy the moon, but it's most definitely at a turning point.

It's clear to me that Apple is in trouble it just doesn't know it yet.