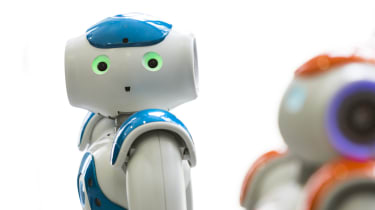 The UK government was criticised yesterday for a perceived lack of systematic funding in AI and robotics, something that was hailed as a "massive strategic error" that places the country well behind most western European rivals.

Industry leaders voiced their concerns over how little the UK is putting into AI and robotics at a Westminster seminar on Tuesday, despite Whitehall's recent round of investment commitments as part of the Autumn statement.

Following a consultation in early 2017, the government outlined a 75 million investment into AI, 9 million of which will be used to fund a Centre for Data Ethics and Innovation, an advisory body that will help direct the development of AI as part of the wider industrial strategy.

As part of that investment drive, the UK also announced it would be pumping an additional 2.3 billion into science R&D for the 2021/22 period, with plans to increase overall spending to the global average of 2.4% of GDP by 2027, up from 1.7%.

However, Geoff Mulgan, CEO of innovation charity Nesta, yesterday argued that the source of funding needs to diversify, as most investment into the technology has come from governments over the past 50 years, which have "been wholly hopeless in systematically doing R&D on AI for everyday uses", to develop applications related to schools, taxation or healthcare.

"It's still the case that even during this current AI fever, there are no systematic programmes mobilising the brain power of AI and robotics communities around the most important challenges of government," added Mulgan. "We're not unique with this blindspot, and it's a massive strategic error on the part of public sectors."

The UK is currently ranked 22nd for the density of robots to humans within production industries, according to the International Federation of Robotics, trailing behind most other western countries, including Belgium and Slovenia, and the leader, South Korea.

Professor Philip Nelson, chief executive of Engineering and Physical Sciences Research Council (EPSRC), the principal source of grants and funding for science in the UK, agreed that the UK is behind on funding compared to other nations, but argued that the country produces high-quality research to fill the gap.

"If you look at licenses granted and patents filed, we are right up there in terms of the output per pound spent, even though the actual total spend is small," he said.

However, the AI industry may be one of the hardest hit by the UK's decision to leave the European Union. A report by RSA published in late 2017 revealed that the UK received up to 80% of its funding for autonomous systems and robotics directly from the EU, and even with the government's latest boost to R&D as part of the Autumn statement, concerns remain that there isn't enough being done to plug the hole.

Professor Chris Melhuish, director of the Bristol Robotics Laboratory and also present at Tuesday's seminar, described the EU as being the "salvation of UK British robotics".

"I hear words like world-leading very often, but to be world-leading you need to invest... and frankly we're not investing a sufficient amount of funding into this area in the right way," said Melhuish.

"I remember giving a talk around 12 years ago... at the time the EU were prepared to put a lot of money into it... and the UK was able to access that funding. Since then we've frankly been playing catch up."

Responding to questions as to whether the UK is equipped to properly finance AI startups, Rannia Leontaridi, director of business growth for the Department for Business, Energy and Industrial Strategy, explained that despite the boost to the research fund, there was a need to make it easier for startups to access capital through its Business Bank.

"We have some serious plans to create more places around the UK where you can find more visibility, and also to capitalise by bringing more people to this 2.5 billion," said Leontaridi. On top of this, Leontaridi also explained she would like to see the Startup Loans Company, a small investment arm of the Business Bank, expand to other areas in the UK in the coming years.

The rollout of artificial intelligence and autonomous systems across the UK could generate an additional 630 billion for the UK economy, and an annual growth rate of up to 3.9%, according to statistics compiled by Accenture.