Developers get more tools to build AI in the cloud and at the edge, plus Microsoft 365 customisation 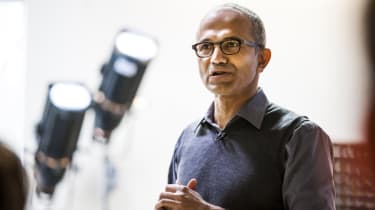 Microsoft yesterday set out to open up its cloud platform to developers hoping to build AI applications, revealing a host of machine learning initiatives at its annual Build conference.

Redmond wants its Azure cloud to be the backbone of developers' AI innovations, with CEO Satya Nadella saying:"The era of the intelligent cloud and intelligent edge is upon us. These advancements create incredible developer opportunity and also come with a responsibility to ensure the technology we build is trusted and benefits all."

Project Kinect for Azure,is a package of sensors, including its next-generation depth camera, with onboard compute designed to allow local devices to benefit from AI capabilities.

The tech giant also previewed its Project Brainwave, an architecture fordeep neural net processingthat Nadella said "will make Azure the fastest cloud for AI". This is now available on Azure and for edge computing, and is fully integrated with Azure Machine Learning with support for Intel FPGA hardware and ResNet50-based neural networks.

The firm is also open sourcing the Azure IoT Edge Runtime, allowing customers to modify, debug and have more transparency and control over edge applications.

Azure IoT Edge also runs Custom Vision technology, a new service that Microsoft says enables devices such as drones and industrial equipment to work without cloud connectivity. This is the first Azure Cognitive Service to support edge deployment, with more coming to Azure IoT Edge over the next several months, according to the vendor.

"With over 30 cognitive APIs we enable scenarios such as text to speech, speech to text, and speech recognition, and our Cognitive Services are the only AI services that let you custom-train these AI capabilities across all your scenarios," said Nadella.

Nadella also announced the company's new AI for Accessibility, a $25 million, five-year programme aimed at using AI to help more than one billion people around the world who have disabilities.

The programme consists of grants, technology investments and expertise, and will also incorporate AI for Accessibility innovations into Microsoft Cloud services. Microsoft said that the initiative is similar to its previous AI for Earth scheme.

Microsoft also handed developers the ability to introduce more customisation forMicrosoft 365 applications, so organisations can tailor them to their needs.

Developers whose businesses use the Microsoft 365 bundle of Office 365, Windows 10 and Enterprise Mobility and Security can now benefit from wider integrations in collaboration app Microsoft Teams, and even publish custom apps on the Teams app store.

There is also deeper SharePoint integration within Microsoft Teams to enable people to pin a SharePoint page directly into channels to promote deeper collaboration. Developers can use modern script-based frameworks like React within their projects to add more pieces that can be organised within SharePoint pages.

The vendor also revealed new Azure Machine Learning and JavaScript custom functions that let developers and organisations create their own additions to the Excel catalogue of formulas.