AI shouldn't make life-taking decisions, but signatories don’t rule out use of AI in weaponry altogether 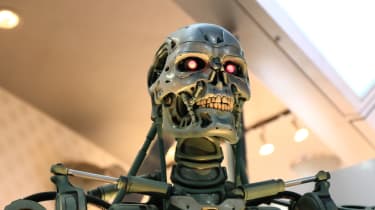 Thousands of developers and more than 100 of the world's leading AI firms and research institutions, including Google DeepMind and Silicon Valley Robotics, have signed a pledge that AI should never be allowed to take a decision to end a human life.

More than 2,400 leading tech industry figures, such as Tesla founder Elon Musk, and 160 companies with investments in AI technologies, have promised to never allow the decision to take a human life to be "delegated to a machine".

In light of the "urgent opportunity and necessity for citizens, policymakers and leaders to distinguish between acceptable and unacceptable uses of AI", the companies signed up to the pledge have also called on governments to establish a set of concrete laws against autonomous weapons.

"We the undersigned agree that the decision to take a human life should never be delegated to a machine. There is a moral component to this position, that we should not allow machines to make life-taking decisions for which others - or nobody - will be culpable," the pledge, organised by the Future of Life Institute (FLI), read.

The signatories argued that such weapons, which also include selecting and engaging targets without human involvement, could be extremely destabilising on a geopolitical level.

They also agreed that removing the element of human control, as well as the close ties with surveillance and data systems, could result in autonomous weapons becoming "instruments of violence and oppression".

"Moreover, lethal autonomous weapons have characteristics quite different from nuclear, chemical and biological weapons, and the unilateral actions of a single group could too easily spark an arms race that the international community lacks the technical tools and global governance systems to manage," the pledge continued.

"Stigmatizing and preventing such an arms race should be a high priority for national and global security."

The pledge comes in the wake of a growing sea of protests - not only from activists and campaigners - but from employees working for some of the world's biggest tech companies, such as Google.

Last month the tech giant said it would not renew a controversial Pentagon-led military project after thousands of its employees publicly criticised the company for its involvement. Dubbed Project Maven, the contract involved Google lending its TensorFlow programming kits to improve the performance of military drones.

But after 3,100 Google employees signed a letter earlier this year demanding the company withdraw from the 'business of war', Google Cloud CEO Diane Greene confirmed in an internal meeting last month the company won't renew the deal once it expires in 2019.

"We believe that Google should not be in the business of war. Therefore we ask that Project Maven be cancelled, and that Google draft, publicise and enforce a clear policy stating that neither Google nor its contractors will ever build warfare technology," the original letter, addressed to CEO Sundar Pichai, stated.

It is unclear, however, as to whether the newly-signed pledge would have contravened Google's involvement in Project Maven, given that it only goes so far as to prevent the decision to take a life being made by a machine - not against the tangential involvement of AI technology in any weapons systems.

Notable absentees from the agreement include Apple, one of the world's biggest investors in artificial intelligence, while only select employees from other major players including Microsoft, IBM and Amazon - not the companies themselves - have signed the pledge.

"I'm excited to see AI leaders shifting from talk to action, implementing a policy that politicians have thus far failed to put into effect," said Max Tegmark, FLI president as he announced the pledge today in Stockholm during the annual International Joint Conference on Artificial Intelligence (IJCAI).

"AI has huge potential to help the world - if we stigmatise and prevent its abuse. AI weapons that autonomously decide to kill people are as disgusting and destabilising as bioweapons, and should be dealt with in the same way."