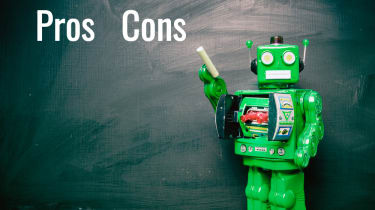 Artificial intelligence (AI) is no longer reserved for sci-fi novels or Hollywood movies. Nowadays, AI - also known as machine intelligence - is all around us, and it's already making a major impact on both our personal and working lives.

There are many visible ways in which AI is influencing, changing and shaping our world, and both it and its allied discipline machine learning are being used in many other areas. Indeed, perhaps it's important to reiterate that AI is actually an umbrella term that incorporates many sub-disciplines.

"AI is a constellation of technologies - from machine learning to natural language processing - that allows machines to sense, comprehend, act and learn," Accenture explains.

Many of us are familiar with the likes of Amazon's Alexa, Microsoft's Cortana and Apple's Siri, and we take for granted the fact that there's quite a bit of sophisticated technology packed into compact devices to deliver the functionality these voice assistants offer.

Granted, these are probably some examples of AI in its most simplistic of forms, but they do help to illustrate use cases that resonate with people and showcase the potential. 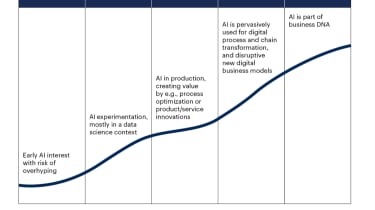 Moving further up the use scale, we have standout names like Watson and AlphaGo. These are systems which have already proven they can roundly beat even the most accomplished human competitors, with a poker-playing AI being the most recent example, beating five professional players at once.

While these types of feats may capture the attention of newspaper headlines, the majority of AI use today is still quietly busying away in the background unseen.

Akin to the voice assistant examples above, if you use Google's Gmail email service, you may notice that it will now show text as you're typing. Replying to an email from Sarah, it will suggest her name as soon as you've typed "Hi" or got partway through "Hello". It will offer other suggestions (such as "are you?" if you start typing "How" in the first sentence or two) as you go along and change them on the fly as you're typing out sentences.

One key use case of AI is mining data to help businesses, NGOs, governments and others make informed decisions on everything from strategy to product development, and to do so much more quickly than ever possible before.

But that's just scratching the surface of AI's potential. Indeed, it's being used in myriad sectors and scenarios, many of which we detail below.

Like all technologies, however, it's not a neutral force there's the potential for negative outcomes and benefits in equal measure. Tesla founder Elon Musk famously believes AI is an existential threat to humans, as did the late theoretical physicist and cosmologist Stephen Hawking.

So is AI a force for good? Or is it something we should be inherently distrustful of?

AI is set to dominate the business, consumer and public sector landscape over the next few years with technologists predicting that soon we will be surrounded by IoT devices capable of performing mundane tasks and speeding up complex ones. Indeed, many of the benefits AI offer will centre around the workplace.

The value of data is now as important to business as oil once was and there is a need to process this data quickly and accurately for real-time results. A good example of this type of AI is being used by DeepMind to diagnose sight-threatening eye conditions as accurately as the world's best clinicians.

Working with London-based Moorfields Eye Hospital and UCL's Institute of Ophthalmology, the results of their research could pave the way for the rollout of AI systems in hospitals across the country. The AI system reduces the time doctors spend studying thousands of eye scans and can diagnose patients within seconds.

From lapses in concentration to simple mistakes, even the best of us are prone to errors. But an artificially intelligent machine built to perform a specific task has no such idiosyncrasies.

Online grocer Ocado uses automated machines in its warehouse, controlling thousands of robots, communicating with them 10 times a second to coordinate the movement of hundreds of thousands of crates.

Much like Ocado, AI will be used to power much of our automated services in the future. From self-driving cars, that use AI to navigate roads and asses obstructions, to smart cities that are predicted to greatly improve our environments.

An AI machine's ability to process large data sets quickly and accurately will be vital for many smart technologies and environment to operate. An example of this is already in operation on many top range smartphones, where AI operates in the background constantly tweaking the phone's settings for maximum performance or battery life.

For every act of good a new or existing technology offers, that can also be turned on its head and be used for nefarious purposes, or simply bad side effects. AI is no different in this respect.

In 2016, an industry-wide organisation including five Silicon Valley giants was formed, known as the Partnership on Artificial Intelligence to Benefit People and Society. This body works to promote the fair and ethical development of artificial intelligence technologies that have the potential to bring as much disruption as it will benefit.

AI replacing human workers is widely-regarded as the number one downside to AI, potentially resulting in widespread lay-offs as employees struggle to outperform machines.

However, while this doom and gloom scenario is often peddled, Gartner predicts that AI will create more jobs than it takes. In research published in 2017, the analyst said it expects AI to create 2.3 million jobs by 2020, and eliminate a further 1.8 million.

"Many significant innovations in the past have been associated with a transition period of temporary job loss, followed by recovery, then business transformation and AI will likely follow this route," said Svetlana Sicular, a Gartner research vice president.

"Unfortunately, most calamitous warnings of job losses confuse AI with automation - that overshadows the greatest AI benefit - AI augmentation - a combination of human and artificial intelligence, where both complement each other."

A recent study from PwC also argued that AI will create just as many jobs as it culls. However, the report detailed that the new technologies will have an uneven effect on industries.

Where sectors like healthcare and education were predicted to benefit, laborious positions such as manufacturing and transportation operators were estimated to see the largest decreases in jobs. Former chess world champion Garry Kasparov has said these jobs losses were necessary to progress, arguing that it is outweighed by the societal good that AI can achieve.

If you have an issue with your current human boss, be thankful that he isn't a cold, emotionless machine because AI is already being used to monitor work productivity.

In what seems like the scary nightmares of a dystopian future, IBM's Watson has been using AI and Watson Analytics to decide if employees are worthy of a pay rise, a bonus or a promotion by looking at the experience and past projects of employees to judge the qualities and skills that individuals might have to serve the company in the future.

That said, though, tech giant Oracle has said that these robot bosses will also have bosses and need to be monitored and managed, just like humans are today.

Come 2025, the majority of cloud-based apps will have AI embedded as standard, according to Oracle's CEO Mark Hurd. But this is nothing to be worried about, he stressed.

"The reality is cloud adoption is moving faster than predicted. Cloud is not just a technology. Cloud is a strategy, cloud is a business model," Hurd told delegates in attendance at the firm's Oracle OpenWorld event in London in January 2019.

"There will be a supervisor for these robots. Just like we all have bosses, the robot will have a boss," Hurd added.

Although AI can virtually remove human error from processes, it can still exist in the code, along with bias and prejudice. Being largely algorithm-based, the technology can be coded to have a negative impact on certain demographics and discriminate against people.

Worryingly, if security is not 100%, hackers can take advantage of AI's thirst for knowledge. For example, Microsoft's ill-fated chatbot, Tay Tweets, had to be taken down after only 16 hours, after it started to tweet racist and inflammatory content ideas it repeated from other Twitter users.

There is a great deal to be positive about when it comes to AI. Of course, like any new or emerging technology that has the power to disrupt, individuals and organisations must also be mindful of the pitfalls.

But being mindful of the downsides does not mean becoming blinkered to the benefits. Indeed, decision-makers have been warned against doing just this or else risk losing out on the benefits on offer.

"Look at how you are using technology today during critical interactions with customers - business moments - and consider how the value of those moments could be increased. Then apply AI to those points for additional business value," said Whit Andrews, distinguished vice president analyst at Gartner.

"AI projects face unique obstacles due to their scope and popularity, misperceptions about their value, the nature of the data they touch and cultural concerns. To surmount these hurdles, CIOs should set realistic expectations, identify suitable use cases and create new organisational structures."

Gartner advises that business and IT leaders should endeavour to cut the AI hype away from the reality by carefully considering and weighing up the opportunities vs risks. Obsessively focusing on automation, rather than the bigger picture, will only obscure the wider benefits, the analyst firm warns.

Sage advice indeed. Let's leave the final word to someone whose entire remit is to focus on what the future holds - whether it's good, bad or inherently ugly.

"Everything we love about civilisation is a product of intelligence," said Max Tegmark, president of the Future of Life Institute.

"Amplifying our human intelligence with artificial intelligence has the potential of helping civilisation flourish like never before as long as we manage to keep the technology beneficial."