How is mistake-prone Microsoft still worth so much money?

Cortana looks like an irrelevant sideshow compared to Alexa and Siri 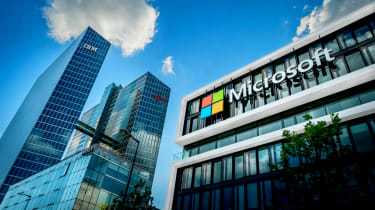 I always find it intriguing to follow the rises and falls, the ebb and flow, of the IT marketplace. What's in and what's out? Who are the rising stars, and who are the has-beens?

It's not always about shiny new ideas. We still rely heavily on old-fashioned tools such as word processors and spreadsheets. Look at Microsoft Office and you'll see little that's significantly changed from 20 years ago. Yes, the products today are much more capable than those of the past. But it's hard to pin down any big changes that make a real difference to individual users.

Windows as an operating system hasn't really changed that much either. The shift to 64-bit, the new memory management model, new graphics engines and a host of other details are all important in their own ways. But does my aunt use Windows in a better and different way than she did 20 years ago? I doubt it.

Yet some things have changed enormously in the past decade. Perhaps the leading one has been the rise of the smartphone and tablet, led by Apple with its iPhone and iPad, and followed by the sea of Android devices. I can't imagine going back to my trusty old Nokia.

With that perspective, the industry-wide take-over of Amazon Alexa is breathtaking to behold. At CES this year it kept reappearing at stand after stand; I can't remember anything shaking things up so quickly and completely since, well, the launch of the iPhone, over a decade ago.

Today, if your product isn't Alexa-enabled, or at least Alexa-supporting, then you are toast. It really is as simple as that. Of course, something better will come along in the future, perhaps derived from Alexa itself or maybe a new entrant. Google is trying to hang on with its Home and Assistant products, and Apple has its Siri solution too, but it's Alexa that has stampeded across the planet.

Then, while thinking about all this, it struck me - where is Cortana? An irrelevant sideshow, more of an irritation than a help. Microsoft has missed the boat when it comes to expanding its consumer offering beyond the Windows platform itself.

And it's far from the first time. The company was desperately late to music players with the unpleasantly brown Zune. Mobile phones? Given up and walked away from, while a quarter of a trillion dollars has flowed into Apple's coffers. Tablets? Well, you might like Windows 10 in a touch environment, but I still find it messy and awkward on my Surface Book, and far too many apps are simply not touch-oriented.

Microsoft has also abandoned its investment in in-car systems, before ever really getting anywhere. Ford has dropped the Microsoft Sync platform in favour of a QNX-based solution, and almost every other in-car platform is in some way owned by Harmon, which is in turn now owned by Samsung.

App stores? Nope again. Microsoft has nothing here to rival iOS, Android Play Store or even Kindle. How about an online video streaming service, one totally suited to cloud? Something to compete with Netflix or Amazon Prime or YouTube? Nothing. And it never succeeded in music either, shutting down its own music service. Search engines? Well, who uses Bing?

The contrast between this and the unstoppable success of Amazon's all-conquering Alexa couldn't be starker. Yet somehow, Microsoft remains one of the three biggest companies in the world, with a market value of almost a trillion dollars. After so many strategic missteps in so many areas, any sane person would be left wondering what was going on.

The answer lies in the company's quarterly financial results. While its big ideas may have flopped with the general public, Microsoft is successfully extracting a great deal of money from the corporate world - and this is rising quarter by quarter. It's also investing heavily into future-reaching areas such as AI, healthcare and quantum computing. Clearly, Microsoft has decided that working on things that directly touch our lives is not what it does any more. It wants to do the data processing, the heavy lifting in the cloud. You might buy an IoT device from anyone; Microsoft wants to be the one that processes the data. Microsoft calls this its Power Platform.

Will this work? Well, Wall Street thinks so, but its view is mostly based on the previous quarter's earnings; Microsoft will be in favour as long as it continues to do well in cloud services. There are other types of cloud on the horizon, though, including tougher legal restrictions on the use of data. Maybe Microsoft hopes to bulldoze its way past such obstacles: its current strategy is clearly working. A five-year hindsight would be wonderful to have right now, however.