Don’t fret about the AI bang, but the digital whimper

When it comes to the fate of humanity, it's useful to look at one of the world’s most celebrated poets 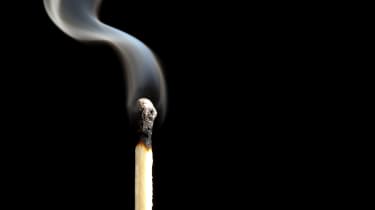 T S Eliot's famous last line hangs on an auditory metaphor, the two opposite ends of a spectrum of disquieting sounds. He wrote The Hollow Men well before the Second World War and the atom bomb; in a 1958 interview, he said he'd not use that metaphor now "bang" had acquired new force. He didn't live to see the internet, which might have done the same for "whimper".

An equally popular dichotomy is the one between "cock-up" and "conspiracy". We're supposed to consider these opposites too, although personally I believe it's possible to have both simultaneously, in the shape of incompetently executed conspiracies, or a well-executed ones that have unintended consequences. And it's starting to look as though AI may turn out to be the latter.

What's prompted this line of thought is a series of trivial incidents I've witnessed over the past few weeks. Two of these were Facebook posts from friends. The first was an unretouched photo of a foggy night sky in Ukraine, in which a Windows 8 error message was clearly visible projected onto the fog by a malfunctioning digital billboard. Eliot might have liked this one, since apparently passers-by were crossing themselves at this terrible sign from Our Father Who Lives In Redmond.

Another was a friend-of-a-friend who is a professional photographer, whose Facebook post got banned as "hate speech" when he mentioned that he had just been out "shooting trannies" - by which he actually meant he had been taking colour pictures on film transparencies. Oops.

The third incident involved me directly, and caused me a day of elevated blood pressure. I started to receive Critical Security Alert emails from Google claiming that it had just refused login to someone who was using my password, which I needed to change immediately. On checking up, I soon determined that this malevolent agent was actually myself in the form of my Windows laptop. I don't use this PC nearly as often as I used to, but it remains connected to the internet and periodically backs itself up to Google Drive and OneDrive: some new super-smart AI security bulldog at Google had interpreted this behaviour pattern as that of a spotty teenage identity thief.

Problem was, Google then put a block on my Gmail account from that machine, and I feared that this might spread to my Chromebook, phone and tablet and lock me out altogether. This proved far from irrational: when I did as told and changed my password, my Chromebook rejected the new password as wrong. Shortly afterwards, my Chromecast stopped Chromecasting. After applying a shot of whisky, a few aspirins and a cold compress, I found that at least Google had the decency to keep the old password active, so I could get back in and unchange it.

There followed a pantomime where I tried to contact a human being to tell them what was happening, but failed until a complete fluke saved me: while glowering at my Gmail account page, a chat window popped open and eventually I got it all sorted with the help of a Google engineer based in the Philippines. It involved rebooting everything in the house except the hi-fi and the dishwasher, and more changes of password.

The point of these little tales is that the current media panic over AI is woefully misdirected. Far from super-smart machines outhinking and enslaving us, it's more likely that super-dumb, inadequately tested AIs will drive us to nervous exhaustion and bankruptcy - although the result may be same: they put most of us out of work.

I blame the sci-fi fraternity. It has spent more than a century sketching out dystopian scenarios for the end of civilisation as we know it: Soylent Green,where we choose to consume old people as protein supplements; various dramas, from Metropolis onwards, that reduce us to slaving for a machine master; robot friends replacing human relations, as in the nauseatingly sickly Her or the excellent Ex Machina.

I think it likely that the end will come as a whimper, a plod through VR helmets and Facebook Live streaming; watching Netflix movies while eating a Deliveroo'd pizza; house ownership for half and nylon tents for the other half; flood/wind/fire devastating the outdoors and keeping us all indoors. But cheer up luv, it may never 'appen!