Once upon AI time in Hollywood

Producing a successful film has always been more an art than a science, but machine learning may be about to change that 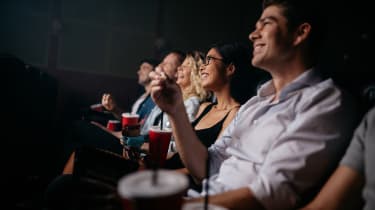 "Jaws in space" is a one-line pitch alleged to have got the movie Alien to the big screen. While it may have worked in piquing 20th Century Fox's interest, Ridley Scott's classic sci-fi horror actually had a slow production due to the studio not being keen on financing a film set in space. Its interest in the genre changed after the groundbreaking success of Star Wars, but without it, Alien might not have been made. Given the film went on to gross $80 million at the box office in 1979 alone, not to mention recurring revenue as it entered cult status, it seems lucky Fox paid heed to the space epic trend.

Many factors go into making and marketing a film, such as which actors are in it, the size of its budget and when and where it's going to be shown. Add to that how many movies are made and released each year and how long this industry has been churning them out, and you have a vast dataset that is nearly impossible to comprehend for a human at least.

While in the past it may have been difficult to glean anything useful from this volume of information, we now have artificial intelligence and machine learning technologies that can process data at speed and divine useful insight from it.

Having revolutionised everything from medical diagnoses to sports tactics, Hollywood is finally getting in on the action.

From space exploration to the silver screen

Cinelytic is one of the companies offering AI tools to the film industry to help predict box office success.

Using this information, the company claims it can predict the economic value of a film and potentially the total revenues it will have over its lifetime.

The idea for Cinelytic was born while Sen was working as a software engineer at NASA using AI to carry out risk assessments for launches.

"While working [there], I got interested in whether this approach and methodology could be applied to movies, so I started building predictive models to see if I could predict box-office revenues having only the information available before the greenlight decision," he says.

"While there doesn't appear to be many similarities between assessing the risk of failure of launch vehicles and spacecraft, and the risk of failure of a motion picture, they are quite analogous; they both work with massive budgets, generate a lot of public interest, and occasionally have spectacular failures."

Sen's AI models form part of a subscription-based interface that works as an online questionnaire. An entire project can be put through the platform, multiple scenarios can be run in a matter of minutes, instead of days and Sen says it enables executives to have a much fuller picture of the risk profile of a project during the decision-making process.

For proof of concept, Queisser and Sen used the platform to estimate how well a few of 2019's films would do before release and then measured the results against the actual box office takings its success rate was quite high.

One of the projects rated was the recent reboot of Hellboy, which was made on a budget of $50 million. The movie was poorly received by critics and reportedly suffered problems during filming, but based on Cinelytic's data it was destined to flop anyway. The platform estimated a $23.2 million taking at the box office, less than half of its budget: In the end, it couldn't even manage that, earning just $21.8 million.

The key statistics for Hellboy appears to be a mix of genre and timing. Originally it was set for a January release but was moved to April, jamming it into a comic book-heavy late spring schedule. Sandwiched between DC's Shazam and Marvel's Avengers: Endgame is obviously a slot no producer wanted their film to be in.

"It definitely changed my workflow," Feng tells IT Pro. "I feel like before, outside of the creative instinct that you still need to have, that never goes away, when it comes down to the brass tacks and you're just running through modelling and coming up with an argument to engage in a product, the process was much faster with Cinelytic.

"It allowed me to try many different scenarios, where normally you're just stuck with one or two possible approaches and you're reliant on a lot of people to go through it. Which is very expensive and time-consuming."

His next release is a psychological thriller called Luce, starring Octavia Spencer and Naomi Watts.

"[Luce] was already pretty far along and we had already shot the film," Feng explains. "But Cinelytic was really good on the sales side of it for figuring out where it might land. We were in the throes of not only international but domestic sales so it was pretty useful to just give me a sense of what to potentially expect. So when the numbers and the offer started coming in, it was very helpful to me."

He didn't restrict his experimentation to one film, though, applying Cinelytic's technology to a variety of other projects in development.

It's important to remember that while Cinelytic can extract lots of valuable information from movie data, it can't go beyond the data it's fed. By default, its algorithms will only be able to tell you what's worked in the past because that's all the information it has. There's nothing to help it predict an outlier, a runaway hit that seemingly comes from nowhere. Take the success of Jordan Peele's directorial debut, Get Out, which took $255.5 million at the box office from a modest $4.5 million budget. The smash-hit horror film was financed by Blumehouse Productions and had a largely unknown cast at the time.

Hollywood producers still need to exercise creativity and use their instincts when going forward with a project, but those gut feelings can be backed up with data analysed by machine learning. For instance, Tim Burton was keen on a Superman film with Nicolas Cage as the Man of Steel, but that never made it into production. With Cinelytic, however, we can at least have some idea how well it might have done...