Skype spam malware 'recruits your PC for a botnet'

Trojan delivered as Skype message may sign up your computer for botnet, Malwarebytes finds 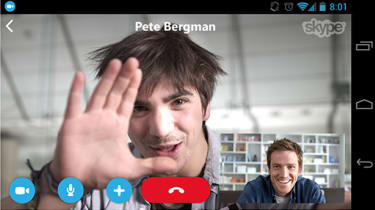 A spam campaign is infecting Skype users with malware that may enlist their PCs in cyber attacks, security researchers have discovered.

The majority of affected users appear to be based in India, Japan, and the Philippines, according to Malwarebytes, the company that discovered the bug, but the malware may have already spread to other countries.

Victims receive spam messages on Skype containing Japanese katakana characters and a bitly link. Once clicked, the link directs them to a compromised domain to download a file pretending to be an image.

The image is a screensaver file, which is detected as a malicious SCR file Trojan.Injector. Once executed, it phones back to servers located in China, Vietnam, and the United States.

It also reads data from several configuration files and information about the machine it is installed on, such as the computer name and its GUID, a unique identifier.

Malwarebytes said the malware also connects to an IRC server, possibly to join a botnet. The compromised domain the file connects to does not use a web application firewall and this, said the firm, makes it easier for malicious actors to infiltrate and use the site.

"For those who are new to Skype spam, note that this modus operandi has been reused countless times, and it often yields successful results for the criminals," said Jovi Umawang, a researcher at Malwarebytes.

"The texts and links have changed as time went on, but what will remain the same is it will continue to take advantage of people's curiosity and trust that is already established between and among individuals in a network, regardless of size."