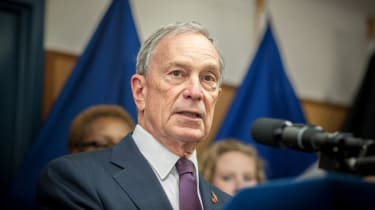 A clutch of 70 Twitter accounts backing Democratic presidential candidate Michael Bloomberg have been banned from the site amid accusations they were attempting to manipulate the platform.

As reported first by the Los Angeles Times, several accounts owned by Mr. Bloomberg organizers posted identical tweets back in November 2019, although their activity was not brought to light until now. These include a reference to Barbara Streisand’s support for the candidate, stating: “A president is born: Barbra Streisand sings Mike’s praises. Check out her tweet.”

Once the issue was brought to the attention of Twitter by the LA Times, the social media company determined that such co-ordinated tweets violated its spam and platform manipulation policy, and suspended the accounts.

In a statement to Reuters, the company said: “We took enforcement action on about 70 accounts, which includes a combination of permanent suspensions and account challenges to verify ownership.”

It’s speculated that these accounts may belong to unpaid supporters or campaign volunteers.

It’s understood that Bloomberg’s presidential campaign is specifically targeting social media as a channel to influence voter opinion. Earlier this month, the Wall Street Journal reported: “[The] campaign is hiring hundreds of workers in California to post regularly on their personal social-media accounts in support of the candidate and send text messages to their friends about him.”

Twitter has taken a firm line on political activity on its platform. In April 2019, it targeted users who were using the service for the purposes of “manipulating or interfering in elections”.

Then in October last year CEO Jack Dorsey announced it would ban all political advertising in the runup to the 2020 Presidential election in a series of tweets.

Facebook, by contrast, has decided to take limited action against these sorts of activity. The company announced it wouldn’t subject political ads to third-party fact checking in the same way other posts are. In February this year, it was also forced to admit it was allowing U.S.-based political candidates to run sponsored or content across not just its main platform, but also its popular photo, video and image-sharing site, Instagram