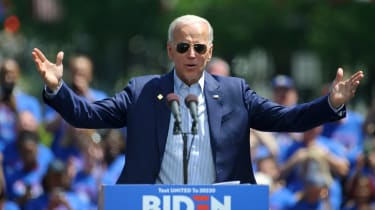 Democratic presidential candidate Joe Biden’s campaign published an open letter to Facebook CEO Mark Zuckerberg on Thursday, in which he calls on the firm to fact-check politicians’ ads in the two weeks ahead of the upcoming US presidential election

The letter also asks Facebook to ensure there are clear rules “applied to everyone, including Donald Trump — that prohibit threatening behavior and lies about how to participate in the election.”

The open letter from the Biden campaign to Facebook urges the social media company to modify its rules on political ads and speech. Currently, politicians’ content is exempt from Facebook’s third-party fact-checking program.

The Biden campaign also emailed supporters on Thursday, requesting they sign a petition asking Facebook to crack down on misinformation in ads. The petition used the hashtag #MOVEFASTFIXIT, a nod to Facebook’s initial motto of “move fast and break things.”

The Biden campaign has submitted a number of recommendations along with the letter, outlining actions Facebook can take to “ensure we have a fair election this November.” These recommendations include Facebook promoting real rather than fake news, removing viral misinformation, ending the pre-election lie period and enforcing voter suppression rules across its entire user base.

Facebook responded to the open later, saying, “We live in a democracy, where the elected officials decide the rules around campaigns. Two weeks ago the President of the United States issued an executive order directing Federal agencies to prevent social media sites from engaging in activities like fact-checking political statements. This week, the Democratic candidate for President started a petition calling on us to do the exact opposite.”

“Just as they have done with broadcast networks — where the US government prohibits rejecting politicians’ campaign ads — the people’s elected representatives should set the rules, and we will follow them,” the statement continues. “There is an election coming in November and we will protect political speech, even when we strongly disagree with it.”

Meanwhile, Tim Murtaugh, a spokesman for the Trump campaign, told Reuters: “The American people can think for themselves. They don’t want big tech companies telling them how to think.”

Social media companies have faced mounting pressure to moderate election-related content. While Twitter has both fact-checked and restricted tweets from President Donald Trump, Zuckerberg claims: “Facebook shouldn't be the arbiter of truth of everything that people say online.”