Twitter will start in select countries and expand over time 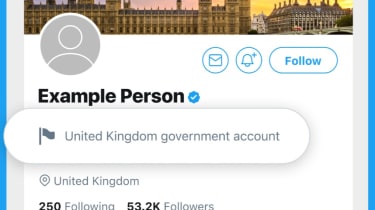 Twitter will start labeling government and state-affiliated media accounts moving forward, much like it does with “Verified” accounts.

These labels will help users know they are looking at an official Twitter page and not a spoof. So, when you tag a government official or office, you know you’re getting the right account. The labels will also identify known state-affiliated media, giving you a better idea of what may be legit news and what may be propaganda.

Twitter will focus on a wide range of government-affiliated accounts, including:

Twitter didn’t mention whether the tags for individual officials will list their title or just that it’s a government office.

Initially, Twitter won’t hit every official in all countries. It’ll start with the key officials in China, France, Russia, the UK and the US. Once it gets a firm grasp on these countries, it plans to expand its tagging to other areas and officials.

Twitter was also careful to define what it considers state-affiliated. According to the social media giant, “state-affiliated media is defined as outlets where the state exercises control over editorial content through financial resources, direct or indirect political pressures, and/or control over production and distribution.”