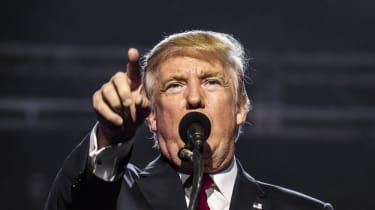 Another big US deal announced last year was Broadcom's $117bn bid for Qualcomm. But that one was blocked by US president Donald Trump because, in the words of the Presidential Order, "there is credible evidence that leads me to believe that Broadcom Limited... through exercising control of Qualcomm Incorporated... might take action that threatens to impair the national security of the United States".

Does this matter to the UK?

So, what does that mean for UK tech businesses looking at merger or acquisition as a legitimate route to growth? Do they need to be wary of potential blocks to their own purchase of, or acquisition by other companies?

Carlos Keener, founding partner at BTD Consulting, which specialises in helping businesses get more from their deals, believes that the Broadcom/Qualcomm block is "yet another example of growing economic nationalism", particularly when it comes to fears around a growing Chinese market.

"While some issues may arise related to acquisitions, the primary concern here is for UK businesses looking to merge or sell to an overseas organisation," says Keener. "Given China's continuing interest in acquiring European firms in high-tech (including those in the UK), larger tech firms looking to sell in the coming few years will need to make sure to formally consider - and prepare for - potential governmental resistance to their proposed 'dream deal', be it a sale or even a partnership or joint venture."

It seems almost churlish to talk about this topic without paying some attention to Brexit, with the UK's formal leave date now less than a year away.

Daniel Domberger, partner at Livingstone, a mid-market M&A and debt advisory firm, argues that, in the context of Brexit, "we can expect the British Government to become more prickly about its global independence and may become potentially more protectionist.

"This might come in administrative as well as political forms such as a more aggressive review by the CMA (Competition and Markets Authority) rather than just ad hoc Government fiat."

However, he also envisions a rocky road ahead when it comes to dealing with a demonstrably protectionist US, adding that "the UK may find they face greater scrutiny, especially if the deals are particularly large, strategic, or have national security implications."

Theresa May is also likely to find herself in an "awkward position" if a British acquisition into the US were to be blocked on the same grounds as the Broadcom/Qualcomm deal.

"The Special Relationship is ever more important in the context of Brexit, and the UK will find itself caught between the political need to protest and perhaps retaliate, after debacles like Kraft/Cadbury and the diplomatic need to maintain relationships," says Domberger. "It's an old problem but Brexit makes it more acute."

While the premise that blocking one deal on national security grounds might have wider ramifications for the UK is a sound one and worthy of discussion, it isn't a simple matter to unpick. In the global economy there are many regional interests, trade blocks and agreements.

Perhaps, then, it's worth focusing not on the Trump block, but instead on the UK's situation. The issue for the UK, if there is one, might turn out to be much more about economics than about national security.

As BTD's Carlos Keener explains, "a 'hard' Brexit may lead to similar issues between the UK and EU countries, for example, if France continues to work hard to woo financial services firms and money across the Channel."

If all this shows us anything, it's that those tech firms mulling the idea of growth through mergers or acquisitions will need to keep a weather eye on global as well as local politics in the years to come.