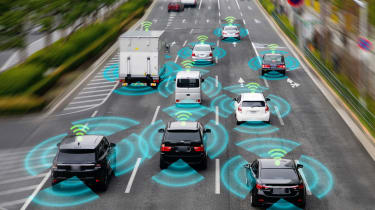 Navigation usage data will be collected and sent back to the platform, which works in tandem with Microsoft Azure, and will allow car manufacturers to make better-informed decisions for tailored services, thanks to being able to tap into the compute power of a large cloud platform.

Diagnostic data will also be driven back to the platform which will allow car makers to make data-driven decisions for engineering and design changes.

TomTom's location intelligence which includes traffic information and map services will also be made available to cars' navigation apps in addition to aiding autonomous driving.

MCVP aims to unify connected cars and the data they collect with its Azure platform so its customers can create improved in-vehicle services, such as traffic alerts and better understand the needs of those with connected cars.

It extends further from just consumers, commercial and industrial vehicles are all compatible with the platform so businesses can harness the data from their fleet of trucks, ships, drones and cranes to help create more efficient processes.

"Our integration with the Microsoft Connected Vehicle Platform means that automakers can get access to precise and reliable navigation and driving behaviour data easily, while of course adhering to privacy principles," said Cees van Dok, chief product officer at TomTom.

"This data could, for instance, be used to predict the range of an electric vehicle based on driving behaviour and planned route more accurately; or to work out, based on navigation behaviour, what connectivity package for online navigation would be best suited for a driver. This is a game-changer for OEMs."

This TomTom-Microsoft partnership is an extension to its existing relationship, which was bolstered in February after the navigation specialist was selected by Microsoft to be its sole location data for its mapping services. TomTom's data is used across a variety of Microsoft products including Azure Maps, Bing, Cortana, Windows and will also be used in future releases.

"With Microsoft Connected Vehicle Platform serving as the digital chassis of the car, telematics, infotainment, and data from sensors are all connected to the cloud in the same way, effectively solving the pain point of managing different systems for scale, security, and reliability," said Tara Prakriya, partner group program manager of Microsoft Connected Vehicle Platform and mobility at Microsoft. "We're delighted to add navigation intelligence data from TomTom to MCVP."

The pair's partnership hasn't always been so fruitful, though. Back in 2009, they both sued each other within a month, alleging patent infringements on both sides. The case was later settled with both sides having to pay the other an undisclosed sum.