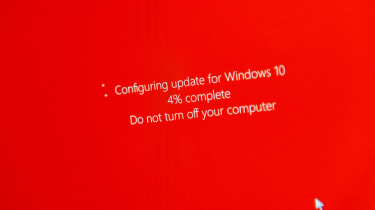 Oh dear. Poor old Microsoft released its Windows Update in October and it caused considerable upset. You know there are problems when a company as big as Microsoft pulls an update from its site, and tries to reissue it later on.

I'm in two minds about this. On the one hand, bugs will get through testing. It doesn't matter how much testing you do, there will be combinations that unexpectedly cause significant issues. You hope that your testing regime is thorough enough to have caught every conceivable outcome, but you can never be sure.

On the other hand, I'm annoyed by this update failure for several reasons. First, it deleted users' data from their computers. Now I could sit here and waffle on that all machines should be seen as disposable that the loss of any data at any time from any computer is entirely the fault of the user. There are no excuses for lost data, and you must protect yourself appropriately. As the old saying goes, "there are those who have lost data, and those who haven't... yet". Consequently, it's very easy for me to wag my finger and say that anyone who has lost data from this update is an idiot and is culpable.

Which is fine up to a point. The way that the data has been lost, however, is somewhat troubling. Essentially, it seems that the upgrader incautiously wiped parts of the My Documents tree in the file system.

This is an area of Windows that Microsoft has fiddled with for decades. It started off simply, whereby each user had their own tree of My Stuff. Then businesses wanted to allow users to move between computers. So the idea of a roaming profile came about, where the My Stuff was synced to a server as you logged in and out.

This wasn't without issues, especially if you were away from your fast local area network. Things have now progressed on to the world of syncing files to cloud services such as OneDrive and Dropbox, and the sheer quantity of data has increased almost immeasurably since the days of the floppy disk drive.

So here is my worry. Microsoft is desperately trying to weed out all of the old code in Windows, to re-architect things in a modern way. However, it's trying to do so in a way that keeps backwards compatibility working. The company has tried shifting us to platforms such as Windows RT, and now Windows S, in an attempt to restrict the complexity of Win32 applications that arguably might be seen as historical.

But this doesn't help the underlying systems of Windows itself. Windows is now so complicated that it's entirely impossible to successfully patch it and keep up to date. Bug fixing is done with one hand in mouth, because there are combinations and permutations that might simply blow up. Trying to keep everything working is like trying to spin plates on sticks. At some point, you simply run out of hands and feet to keep the plates spinning.

Unfortunately, there's no simple answer to this problem. If there were, Microsoft would have tried it. Its various efforts so far have fallen considerably short of what's required, because it's utterly terrified of making the big conceptual leap to a clean sheet. Better to keep running around like headless plate spinners than actually stand up to the core issue.

Perhaps I'm wrong. Maybe this Windows update was just a glitch and will be quickly forgotten. Maybe normal service will resume. But the push to automatic updating, while vastly better than that zombie rot of "no updates for three years" we were subjected to in the past, still has challenges.

At what point will Microsoft draw a line in the sand and say "you know what, this is as far as we can take this platform. We need something new. Something completely clean. A total break from the past. We'll keep Windows 10 going, but that's it for feature development. We can't keep going down this spiral of ever-increasing complexity"?

Many would panic at such news. Who knows what Wall Street would say. For myself, I would applaud such honesty and audacity, provided exactly the same vision came from the Office team as well.

"Yes, Excel is now horribly over complicated and impossible to learn, deploy and use. We can and will do better."

Of course, this will never happen. We will keep seeing the platform patched and re-patched, and fixes thrown on top of fixes.

Meanwhile, businesses will hold their breath, and hope that their internal testing before release is good enough to keep most of the nasties at bay. Those who just auto patch? Make sure your backup works properly.