It's time for Microsoft to deactivate its kill switch 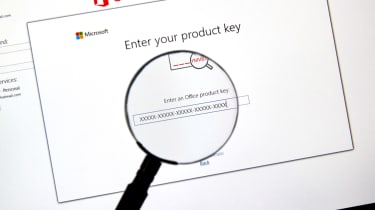 When Microsoft introduced Windows activation back in 2001, it sparked a small but visceral backlash. Posters on Slashdot howled that "you don't own your PC any more", and swore they'd never use a Microsoft product again.

I always thought this was a huge overreaction. The process of activating took ten seconds while you were setting up your new laptop, after which you could forget about the whole thing. And I had some sympathy for Microsoft's position: in my student days, almost everyone I knew was using a dodgy Windows 95 product key that they'd found on Usenet, or borrowed from a rich friend's new Tiny PC. You couldn't expect a software company to sit back and let that happen forever.

As of this month, though, I've changed my mind. My conversion began a few weeks ago, when a little desktop watermark quietly appeared on my Surface Laptop saying "Windows is not activated". I've seen this warning pop up on other systems in the past -- for example, when I've replaced a CPU and motherboard, causing Windows to think it's been moved onto a different PC. This time, though, I couldn't account for it: indeed, on a modern laptop it's effectively impossible to switch the hardware around like that.

Unfortunately, this isn't a warning you want to ignore. Once Windows decides it's not activated, it's only a matter of time before it starts taking obnoxious measures to encourage you to fix the problem. In various editions of Windows, these measures have included locking you out of Windows Update, automatically logging you off every hour and, in the case of Windows XP, simply refusing to start up at all. Windows 10 isn't quite that heavy-handed, but still, it's not a good path to be on.

Alas, re-running the activation wizard returned only an error code, and a worrying suggestion that I might have been sold a "counterfeit" product key. The solution? Buy a new licence from the Windows Store, for the bargain price of 220.

Well, having bought my existing product key directly from Microsoft, I was pretty confident that it wasn't a fake. So I did what I've always done in the past when such problems have arisen. I called the telephone helpline, where a helpful robot has invariably given me a lengthy code that's got my system working again with no questions asked -- another reason why I've never been too bothered about activation.

This time I was out of luck. The robot I knew is gone, and it's been replaced by a computer that says no. The recorded voice told me flatly that -- just as Windows itself had claimed -- I was a dirty thief who wasn't entitled to be running Windows 10 Pro, and that my only recourse was to get out my wallet. Then it hung up on me.

Now I was starting to feel properly angry, and I was about to take to Twitter to impotently vent my frustration -- when a thought occurred. A quick search confirmed my suspicions: hundreds of people, all over the world, were already tweeting about the same problem. Evidently, the issue was with Microsoft's back-end rather than my individual licence. A few hours later, the company confirmed a server error, and by the end of the day the activation wizard was working again.

So, a happy ending? Hardly. I didn't end up paying a small fortune to replace my Windows licence, but Microsoft's screw-up still cost me a lot of wasted time and frustration in the middle of a working day.

And I was one of the lucky ones: as the story spread, reports came in of unfortunate users who had wasted hours reinstalling Windows to try to clear up the problem. Others were panicking, as they had upgraded from Windows 7 and had no documentary proof that they were entitled to be using Windows 10. IT support agencies found themselves swamped with calls from concerned clients.

The global cost of the whole debacle must easily have run to millions of dollars. Needless to say, Microsoft isn't offering any sort of compensation. As far as it's concerned, our investment in its products is entirely at our own risk. That's not good enough for an operating system that changes and updates itself without your consent or knowledge. And let's be clear, these problems didn't only affect bleeding-edge Insiders, but paying customers running supposedly stable code.

Even on its own terms, Microsoft isn't playing straight with its users. When I first set up Windows 10 on my laptop, the OS confirmed that it was "permanently activated". It's now clear that this was a lie. The reality is that the platform I rely on for my livelihood can be deactivated at any time by a misconfigured server on another continent.

And you have to wonder: what even is the need for this capability? It made sense when Microsoft's biggest problem was people installing Windows on their friends' and families' PCs. But nowadays the firm's imperative is surely just to keep as many people on the platform as possible -- witness the zeal with which it pushed users of older Windows versionsto upgrade for free.

Here's hoping that this disaster serves as a wake-up call. Microsoft hasn't been shy about copying Apple so far; it's time for the company to follow macOS' lead and make Windows properly free, at least for home users. The archaic, obstructive idea of remote activation needs to die. And next time the Slashdot crowd gets its knickers in a twist over something, I won't be so ready to dismiss it -- not if the alternative is trusting Microsoft to do the right thing.