On the flip side, Amazon Alexa will be deeper integrated to Windows in the September update 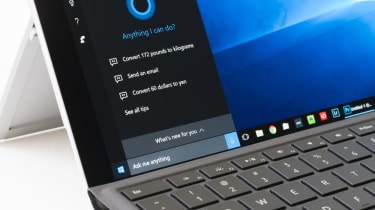 Microsoft has a new vision for Cortana that involves a shift in focus towards enterprise customers and further integrations with Amazon's Alexa.

The changes will involve conversations and interactions that are part of the software and services the company offers to businesses, but it will be one of multiple digital assistants available on Windows 10 in the future.

This is because Microsoft is opening Windows 10 even further to third-party digital assistants. In the next update to Windows 10, due in September, Microsoft will allow voice assistants like Alexa to activate on the lock screen. The change will allow third-party assistants to be activated from their wake words when the PC is locked. So calling out 'Alexa' will open your laptop as well as your Amazon Echo device.

These digital assistant changes will be in the September update, codenamed 19H2. Unlike previous Fall updates, this one will be a lot smaller in size with fewer new features and changes.

Although the changes are minor, it does show that Microsoft is willing to work with its rivals, particularly as its own voice assistant, Cortana, hasn't been as popular as the likes of the Google Assistant.

Any time Cortana shows up on the work laptop pic.twitter.com/zKLcdVc9xz

Earlier in the year, Amazon enabled its Alexa wake word on the Windows 10 app and Microsoft also made changes, moving Cortana into a separate app in the Microsoft store and away from the built-in search experience in the operating system, which was arguably one of the more annoying features of Windows 10.

For Amazon, Alexa has been widely adopted in the home and in business. Most recently, the digital voice assistant has been announced as an asset for the NHS as it will be used both in the service and as a replacement for calling your GP.