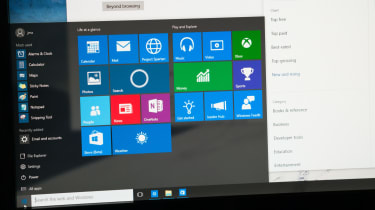 Microsoft has accidentally released an internal-only version of Windows 10 that reveals a new start menu.

The Windows 10 build 18947 was only meant for internal Xbox development but was instead sent to a range of insider testers. The leaked version was quickly taken offline, but not before it could be shared to the general public.

Typically, Microsoft's Windows testers are separated into 'rings' that each receive update one after the other. However, a configuration change to the system that releases the builds sent version 18947 to a few of these rings at the same time.

This build includes a new start menu that appears to have dropped Microsoft's coloured live tiles in favour of a more traditional looking interface with apps displayed in a grid. This is reportedly something Microsoft is testing for Windows Lite, but it hadn't previously suggested this was the case for the full version of Windows 10.

Windows Central was one of the first to report the leak, with Zac Bowden tweeting that an internal error had led to the incorrect rollout. He added that insider previews are usually about five to seven days old before they're rolled out to those in the fast ring, but that 18947 is only a day old.

This isn't the first time Microsoft has unintentionally released a build. In 2017, insiders caught a glimpse of Windows 10 builds for PC and mobile after a fault with its engineering system that controls the deployment to insider rings. These were also quickly retracted as they could have caused issues to the devices they were sent to, such as a reboot loop.