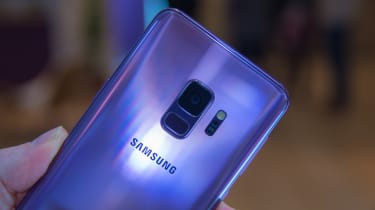 Samsung has officially launched the Galaxy S9. The follow-up to one of the most popular phones of last year, the Galaxy S9 has a lot riding on it, but Samsung is hoping to continue its winning streak with a number of improvements to elements such as the camera, design and more. Read our hands-on with the device from MWC 2018 here.

05/03/2018: Researchers have warned that the new facial recognition technology inside Samsung's Galaxy S9 range uses the same security safeguards as its previous generation smartphone, the suggestion being the company has prioritised features over user safety.

'Intelligent Scan' was initially billed as being a smarter version of Samsung's facial unlock system that's fitted to the S8, and while it certainly boasts faster processing and iris scanning that works as a backup if the first scan fails, the technology can still be fooled relatively easily.

The Galaxy S9 uses its camera to create a 2D map of a user's face, the same process used by the S8, which was famously fooled into unlocking a device from a photograph. Apple's Face ID, in contrast, creates a 3D map.

Jan Krissler, part of the hacking group Chaos Club that first highlighted the S8's security flaw, told CNET that the group wouldn't try to hack the S9 because there have been few changes to the technology in the past year. "There is no fun in hacking just a new release of the same system," he is quoted as saying.

Other researchers, including global data analyst Avi Greengart, argued that Samsung was still playing "catch up" with Apple on facial recognition, as the latter has "invested an enormous amount of money, time and effort into Face ID". This is despite the fact Samsung had a working version of the technology first with the S8.

While Samsung has allegedly done little to make Intelligent Scan more secure, the upgrade does make it far easier to use. In order to increase the accuracy of each scan, the S9 will map a user's face first before moving to an iris scan if it is initially unsuccessful. If conditions aren't ideal, such as poor or bright lighting, the system will combine the two to improve results.

The Galaxy S9 and S9 Plus aren't a particularly radical departure from their respective predecessors, but there are a few key differences. The new devices sport improved cameras, an updated design, and even thinner screen bezels. They are also now available in a fetching purple hue.

As usual, the new phones are powered by one of Samsung's own chips, the 2.7GHz Exynos 9810, in some territories, but make use of Qualcomm's latest Snapdragon 845 in markets including the US. That's paired with 4GB of RAM for the regular S9 and 6GB for the S9 Plus.

Samsung has also improved Bixby, its answer to digital assistants like Cortana and Alexa. Bixby can now perform live translation, use the camera to automatically identify food, and even provide nutritional information such as calorie counting.

Pre-orders for the two devices are open now, and they hit shelves on 16 March. The S9 will cost 739 SIM-free when bought directly from Samsung, while the S9 Plus will retail for 869.

To find out what we thought of the Galaxy S9 and S9 Plus, you can read our hands-on review.

As part of the Galaxy S9's official launch, Samsung confirmed that the S9 and the S9 Plus would be available for preorder starting 25 February, with full in-store availability coming on 16 March.

The Galaxy S9 will be priced at 739 SIM-free, which is a noticeable price-hike compared the the Galaxy S8's initial launch price of 689 - in fact, it's a 50 difference. The Galaxy S9 Plus, meanwhile, will set you back 869, which is approaching the iPhone X in terms of expensiveness.

Samsung hasn't changed much for the S9's display; it's still using the same 5.8in Super AMOLED panel and a QHD resolution. It's also kept the aspect ratio of 18.5:9, which is becoming increasingly popular. The Galaxy S9 Plus is the same, save for the larger 6.2in screen size.

Unsurprisingly, Samsung has stuck to its formula with the S9, packing it with an own-brand Exynos chip in some regions, and Qualcomm's Snapdragon processors everywhere else. In this case, the chips in question are the octo-core Exynos 9810, clocked at 2.7GHz, and the Snapdragon 845.

The vanilla S9 features a capable 4GB of RAM, while the S9 Plus gets a slightly beefier 6GB allocation. Storage is generous, with 64GB offered as standard, and a further 400GB available via microSD card.

The biggest upgrade is to the camera, which has been enhanced for super low light photography. The S9 Plus also benefits from a dual-camera system, for the first time in the history of Samsung's flagship line.

Regardless of whether you get an Exynos or Qualcomm version of the S9, the device will ship with Android Oreo, using version 9.0 of the Samsung Experience UI.