A vast improvement on the already excellent 7, but it's no longer the cheap option 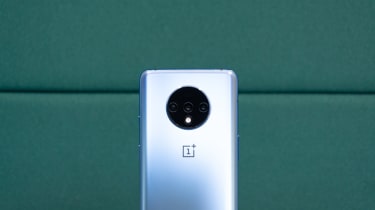 OnePlus is a much-loved brand here at IT Pro, long hailed for consistently delivering stellar smartphones that match high quality design with budget pricing. The company has built up a loyal base of customers that expect superb value for money, and that trend continues with the 7T.

The OnePlus 7T is a considerable improvement on the 7 design, released in early 2019. When set side-by-side with the rest of the range, namely the 7 and 7T Pro, the 7T reviewed here sits between the two.

With OnePlus having just released the 8th generation of the range, there’s never been a better time to check out the 7T, which still features a stunning design and superb display, even by 2020 standards. At the time of this review, the 7T remained quite pricey at £549, though this is likely to drop quickly now that the OnePlus 8 is available.

The first thing you’ll notice is the OnePlus 7T is a superbly designed smartphone, with a handful of small touches that make it stand out from the market competition.

The device ships in two colours: ‘Glacier Blue’ and ‘Frosted Silver’. It’s the blue model that you can see in our photos, which is far more attractive than the fairly dull ‘Mirrored Grey’ of the OnePlus 7. We

Let’s get the most obvious feature out of the way first. The 7T sports a fairly striking camera arrangement, which takes the single elongated vertical panel of the 7 and packs it into a circle in the centre – reminiscent of the Nokia Lumia 1020. This arrangement has allowed the inclusion of an additional camera lens, now up to three. 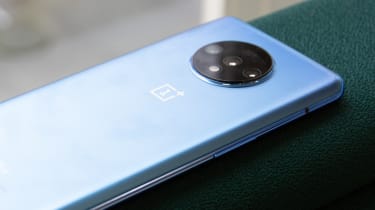 The phone is also a little bit taller than its predecessor, mostly due to a larger display, and screen size has been bumped up with a teardrop notch that's been reduced by 31%. This is the 'regular' model, but it looks and feels like a premium option.

The display has been upgraded with a 6.5in fluid AMOLED screen rather than the 6.41in optic version from the original OnePlus 7. This deals with the noticeable deficit between the 7 and 7 Pro, bringing the smaller version up to standard. There's a small bump in screen resolution - now 2,400 x 1,080 instead of 2,340 x 1,080 - and a new aspect ratio of 20:9. The screen also supports a 90Hz refresh rate - which means it refreshes 90 times per second - and HDR10+ compatibility to support more dynamic video. This is the real deal too, no strange brightness requirements that users found on the Google Pixel 4.

Speaking of brightness, the 7T maxes out at 650cd/m2 which is not especially great, nowhere near the S10 or the P30, and this is a bit of a problem in direct sunlight. Despite upgrading the screen, its test results aren't too different from the 7 - which is because they can't really get all that much better. Once again there's a near-flawless 99% coverage of the sRGB colour gamut. It's a super display and the colours are bold, no matter which of the multiple colour settings you use. It has the quality you'd expect from a Samsung handset and that's partly because it's using a panel made by the Korean giant.

Another big plus with the 7T is its processor; it's running the Qualcomm Snapdragon 855+ chipset. The 7 had a plain old Snapdragon 855 but the new chip, according to Qualcomm, is 15% faster for graphics rendering and CPU performance because the chip is built for gaming. 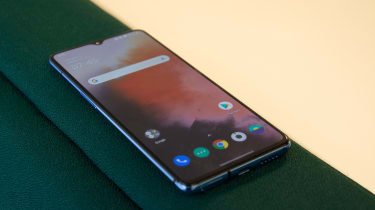 In GeekBench 5 tests the 7T recorded 784 for single-threaded performance and 2,738 for multi-threaded, which are actually slightly less than the 7's test results. However, it's worth noting that the 7 was a very snappy device, and although this is an area of smartphones that always seems to increase, these gadgets have more power than the everyday user will actually need.

It's one of the first phones to ship with Android 10 (sorry, Huawei) and OnePlus has its Oxygen OS 10.0 skin over the top. It comes with boosted visuals, gesture controls and app switching in landscape mode - strangely, not all smartphones have this.

There's a bigger 3,800mAh battery inside the 7T. This is a slight jump from the 7 which had a 3,700mAh one. Predictably, this resulted in only a minor hike in battery life. Under our video tests, the 7T lasted 21 hrs and 12 mins, which is only a couple of minutes more than the 7 managed. While not a massive improvement, it's still very good, especially if you compare it to the Huawei P30 Pro which lasted just ten minutes more, although it's worth pointing out that is the premium model of Huawei's flagship with a much bigger 4,300mAh battery. The Google Pixel 4 is cheaper, but that lasted almost five hours less.

These are, of course, intensive tests that won't relate to actual users. For real-world experience, starting from dawn and going through a full shift where the phone is heavily used, we still had plenty of power to stream a movie, browse the web or flick through tweets at bedtime.

Everything from the 7 is still here and present; a volume rocker down the left, a power button and 'do-not-disturb' slider on the right. Most of the 'new' stuff is on the inside with Android 10 and Oxygen OS. The gesture controls are sort of useful, such as capturing a screenshot with a three-fingered swipe or muting an unwanted call by flipping it over, but these aren't any more efficient than the normal way. 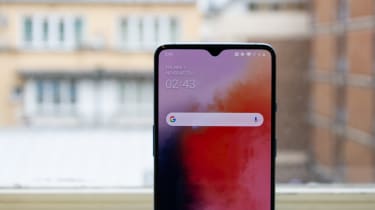 There has been a tweak to the fingerprint sensor with an update to the biometric algorithm. OnePlus says this means a better sensor for detecting your print in wet conditions, which we can't really agree with from personal use in rainy London. We also had issues with using a thumb, which the device struggle to reliably detect, whatever the weather.

And so, on to the biggest change from the OnePlus 7; the camera arrangement. As previously mentioned, the 7T's rear disc houses a trio of cameras. This falls into a new trend with smartphones where the manufacturers are seeking to find the best way to incorporate more lenses without it looking ghastly (see Nokia's PureView for an example of how not to do this). Samsung and Huawei are on the front foot with this, having released the S10 and P30Pro with three cameras in neat bars. However, there's something more pleasing about the circular casing, which puts us in mind of the lens of a professional camera.

The triple main camera arrangement is made up of a 48MP f1.6 snapper, a 16MP ultra-wide-angle f2.2 lens and a 12MP telephoto f2.2 lens. On the front is a 16MP f2.0 selfie cam. This rear suite of lenses is not exactly groundbreaking, nothing Huawei or Samsung would take much notice of, but it's a big improvement from the 7 - it certainly brings the device up to the level of its rivals.

One area in which it may have the jump is its 'super-macro' mode. Using this feature you can capture subjects as close as 2.5cm with amazing detail. This is also something the Huawei P30 Pro does, but that costs even more than the 7T.

If you purchased a OnePlus 7 and felt slightly disappointed by the lack of razzamatazz, then the 7T is what you're after. It looks better, it feels better and has that extra camera in a futuristic-looking dome. But, you'll need to cough up more than the 499 you spent on the 7 - 150 more, to be precise.

At 549, the 7T is more expensive than the Google Pixel 4 and not far off the S10 (still well behind the iPhone, though) which suggests that the company's miraculous run of producing pound for pound value is over. However, this doesn't have the shoddy battery life of the Pixel 4, or the small display issues and is still over 100 cheaper than Samsung or Huawei's flagships. It's no longer as much of a bargain, but it is still a belter.

The 7T is unusually expensive for a OnePlus phone, which suggests that the company's miraculous run of pound-for-pound value is over