Google Pixel 4 XL review: A Soli excuse for a battery

There's plenty to love on the Pixel 4 XL, but it needs more juice... 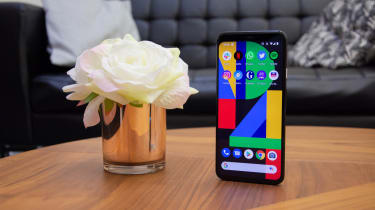 As Halloween, winter and (dare we say it) Christmas approaches, 2019 is set to end as a very good year for smartphones. From January onwards we've been spoilt for handsets, starting with Samsung's Galaxy S10 and Huawei's P30 Pro and finishing with the iPhone 11. Now, as people start thinking about their list to Santa, Google has launched the next iteration of its flagship - the Pixel 4 and Pixel 4 XL.

Ironically, this has also been a tough year for the market, with global sales down. Each of the big companies have reported drops in revenue; Apple being the first to announce a fall in January, quickly followed by Samsung. Huawei has begun to feel the pinch of the US government after it's blacklisting and let's not forget, the two foldable devices announced at MWC that are still to be released.

However, what has been released is of a ridiculously high standard. Now Google brings the Pixel into the fray, with two cameras, 90hz refresh rate and a special motion sensor. If you've got your heart set on a phone this Christmas, is the Pixel 4 XL worth writing to Santa about?

There's a very iPhone 11-esque look to the Pixel 4 XL, which is largely down to the camera array. The similarity is that it's square and strangely personified due to the layout; two cameras and a sensor positioned like eyes and a mouth. This is an unintended consequence of the design being refreshed, with Corning Gorilla Glass 5 front and back covers and a black matte-finished aluminium outer rail. However, it's not a total doppelganger; for starters, it's slightly taller than the 11 Pro at 160mm, but it's also not as wide at 75mm.

It doesn't take itself so seriously either; the traditional names for handset colours have always walked a fine line between the pretentious and the just plain stupid; think of 'Pink Gold', 'Breathing Crystal' or 'Midnight-Green', all of which sound sillier than what you'll find on paint tins. Google has always poked fun at this with names like 'Clearly White' and 'Just Black', and this year it's added 'Oh So Orange' which is funny, but also a limited edition. It looks a little bit like a tile from a 70's kitchen, but it does stand out in an otherwise predictable market. 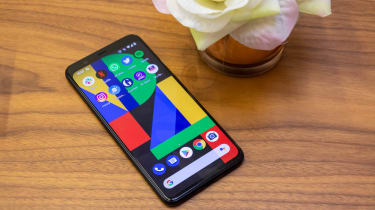 Whatever shade you opt for, however, you'll have the other colours incorporated in some way. They all come with a black matte-finished edge and camera square. The power button will be a different colour from the rest of the device (our review model is black, so the button is white) and sits above the black volume buttons.

There isn't a notch on the Pixel, but because it has to incorporate its new motion sensor with a camera and speaker bar, it's brought bezels back from the dead. This is arguably the first drawback considering Samsung, Apple, Huawei, OnePlus, and virtually everyone else has made edge-to-edge displays the norm. What's more, the top bezel is twice the size of the one at the bottom, which creates an asymmetrical display - not a huge problem, but once you notice it, it's a little jarring.

Which is a shame, because the screen is rather lovely. It's a 6.3in QHD+ display with 537ppi, a 3,040 x 1,440 resolution and a 19:9 aspect ratio. What's more, it has that 90hz refresh rate which basically means the screen refreshes 90 times per second, like the One Plus 7T. It all sounds very impressive, but there is a small hitch. The refresh rate is tied to brightness levels and drops to 60Hz when those levels drop below 75%. You can set it to stay at 90Hz in the settings, but this will add more strain on the battery.

In daily use, the Pixel showcases colour rather well (although a product named after pixels kind of has to). This was backed up in the lab with our display tests, where the 4 XL produced a perfect sRGB gamut coverage of 100%. Its max brightness of 407cd/m2 wasn't as impressive, not even half of what the P30 Pro managed at 854cd/m, and that did show with streaming apps like Netflix. Lots of the detail is lost in direct and bright sunshine, but aside from that, this is one area the Pixel can be really proud of. 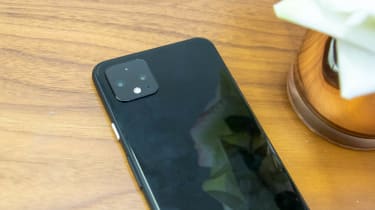 While the scores were low, there isn't any noticeable lag or sluggishness in real terms. The Pixel 4 XL feels snappy enough and actually very fast with certain tasks. The face unlock is a good example of this, which we'll go into more detail about later on.

In descending order; the Huawei P30 Pro lasted 21hrs, 22mins and the Samsung Galaxy S10+ reached 21hrs, 17mins. Google could argue that those are intensive tests, or that the device can be customised for efficiency, but we can fire back that from our own daily use of the Pixel, its battery dies quickly. Without recharging, it just about makes it into the evening under normal use.

The big showpiece on the Pixel is the motion sensor, developed under 'Project Soli'. It's a form of sensor technology that works by emitting electromagnetic waves in a broad beam. There was a similar feature on the LG G8, but what sets this apart is that it's a radar sensor and not camera-based and as such not restricted to a field of vision. It's worth noting that as it's still in its infancy, all you can do with it is skip songs on Spotify, shut off alarms and wake the phone, all with a wave of the hand.

You can see how it works from Google's strange partnership with The Pokemon Company; The two have developed a demo game just for the new sensor, to teach people how to, essentially, wave at a phone. We assume that with updates this may get more advanced, but for now, it's just waving. 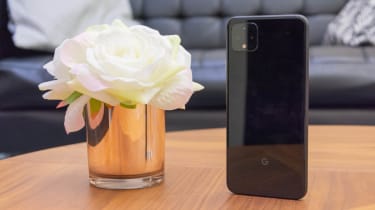 You can also squeeze your pixel at the sides to bring up Google's assistant. The problem is, it often activates when you don't want it to, and although you can reduce or increase the sensitivity of squeeze, it still seems to happen - it's as annoying as Samsung's Bixby, or Cortana on Windows machines. This, along with a few other features, make the phone a bit of a chore if you leave it on the default settings - and it's worth noting that you also save a little bit of battery by turning some of them off.

Other shortcuts include a two-fingered swipe up that opens a transcribe feature. It starts instantly typing out what it can hear, with varying results, it has to be said. It struggles to keep up with normal talking speeds, misses lots of sentences and mishears words (it seems to hear lots of expletives). To put it in perspective, even Otter.ai hasn't got it totally right, but the Google version is somewhat behind that.

Sadly, there's also no fingerprint sensor, which takes a while to get used to. This is particularly annoying when the facial recognition fails in low lighting and you're back in the dark ages, tapping your passcode in by hand. This also means you can't open certain apps with biometric security - annoying if you have a banking app that relies on it. During the day, however, the face unlock is potentially the fastest we've ever used - perhaps on par with the iPhone. However, it's a chore to set up; it'll ask you to keep moving your head here, there and everywhere while it maps your visage. Strangely, it doesn't need your eyes though, as it can be unlocked while they're closed. This has caused some brouhaha with security experts and forced Google to issue a fix in the next software update.

With previous Pixels, Google has seemed content with one camera, even a bit overconfident at times, suggesting it could do more with one lens than all the other companies were doing with two, three, four and five. But it's somewhat caved on the 4 and added a second 16MP 2x telephoto lens to go with the 12.2MP main camera - these both have an f/1.7 aperture. If you follow the trends with smartphones, you'll notice the lack of an ultrawide lens, which is odd as most flagships come with both as standard.

In its defence, however, the telephoto lens is quite superb. We can't say it beats anything like the iPhone 11 or Huawei's P30 Pro, but it's close to that quality, if not matching. What the Pixel 3 XL managed with one lens was impressive, and the same looks to be true with the two lenses on the 4 XL.

It seems that adding innovative extras on the Pixel 4 XL has robbed it of the basics. The battery life is woeful, there's no fingerprint reader, Google Assistant keeps popping up like an annoying neighbour and there are those great big bezels making the screen look untidy. All that would have been poor two years ago, let alone in 2019.

But then, there are a lot of bits to love, such as the display and its 90hz refresh rate, or the extra camera (Google hasn't gone OTT here; it's about quality, not quantity). But our favourite addition is the motion sensor, which could play a big role in the Pixel's future. However, it's only a minor feature at the moment, and doesn't do enough to recommend it, we're Soli to say.

There is a lot to love about the Pixel 4 XL, such as the display or the extra camera, but our favourite addition is the motion sensor which could play a big role in its future. However, it doesn't do enough to recommend it, we're Soli to say.