This nostalgic ‘foldable’ looks just as sleek as the original but comes with a $1,499 price tag 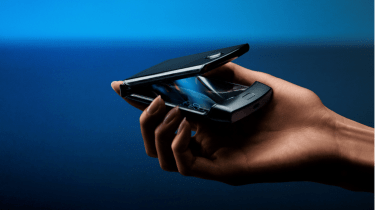 Motorola has unveiled a next-generation redesign for its iconic Razr phone 15 years after the handset was first launched.

Where device makers have generally adopted a bookfold design for their foldable handsets, the 2019 Razr harks back to its flip-phone roots – adopting a unique clamshell hinge that expands vertically to reveal a full 6.2in panel.

At first glance, the modern-day Razr is a slim and sleek smartphone that looks just a stylish as the original device. The handset itself is constructed from stainless steel, with 3D Gorilla Glass protecting its exterior. 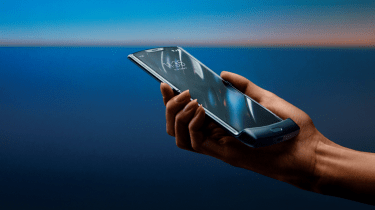 The redesigned Motorola Razr expands to reveal an edge-to-edge 6.2in pOLED panel

"The release of the foldable Motorola Razr brings back a sizeable slice of nostalgia, for the original Razr was nothing short of iconic," said Dominic Sunnebo, director of consumer insights at Kantar.

"With most Smartphones looking near-identical, this clamshell formfactor provides a refreshing change and one that consumers looking to stand out from the crowd will welcome."

"The design itself is in direct contrast to foldables to date, which have focused on creating a tablet-like screen size from a smartphone. The Razr looking pleasingly pocketable, an antidote to the ever-growing Phablet trend."

The Razr's flexible edge-to-edge pOLED (the p standing for plastic) panel complements a smaller 2.7in 'quick view' touchscreen fitted onto the device's exterior, similar to that featured in the original Razr design from 2004.

This smaller display offers users an array of functions without the need to fully open the device, including the ability to reply to messages, control music, or even take photos using the front-facing camera. 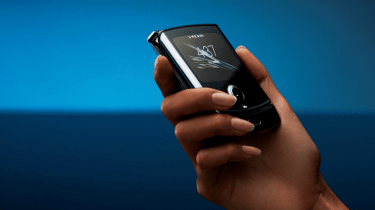 The Razr's exterior features a smaller 2.7in touchscreen display akin to that in the original handset

The flip-fold mechanism, meanwhile, is also patented. Motorola claims this 'zero-gap' hinge, which allows both sides of the polymer display to remain flush when closed, is unique and effectively protects the display from dust and debris like no other foldable.

While the Razr's design is as aesthetically pleasing as one would expect, it's in very real danger of being branded a gimmick should the hardware not come up to scratch.

The device is fitted with an octa-core Qualcomm Snapdragon 710 mobile CPU and 6GB RAM, as well as 128GB internal storage. The camera arrangement, meanwhile, features a rear 16MP lens which can also capture video, and a 5MP front-facing lens.

There is just a USB-C port in terms of physical connectivity, through which the Razr also charges, while the device can also connect to Bluetooth, Wi-Fi, and 4G - but not 5G. 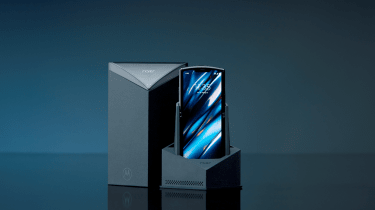 The Motorola Razr has no fixed launch date, but will retail for $1499 in the US

The initial craze behind foldable smartphones has dampened in recent months, largely because the manufacturing process has been plagued with issues.

The Samsung Galaxy Fold, for example, was "not ready" when it was pushed to the market earlier this year, according to the company's CEO DJ Koh, and gained notoriety for how easy it was to damage the second screen.

Both the Samsung Galaxy Fold and Huawei's Mate X foldable 5G smartphone feature bookfold hinges and large, expansive tablet-like panels. This differs significantly from Motorola's iteration, which was first teased by the company three years ago.

The Motorola Razr will be sold in the UK through EE, with exact pricing and availability set to be announced in due course. For reference, the phone is set to retail at $1499 in the US.