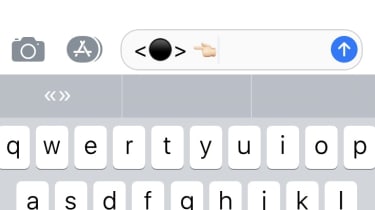 A text bomb bug known as the Black Dot' has been found in Apple's Messages app and is causing iPhones' to freeze and potentially overheat.

iOS messages with the black dot emoji are followed by thousands of unique Unicode characters that are invisible and flood your phones' CPU until the messenger app freezes.

Users that open the text will find their phones paralysed with a white screen, due to the device attempting to load hundreds of thousands of invisible characters which causes the phone's CPU to jump to 75% and then to 100% where it will overheat and possibly crash.

Users will find it frustrating to remove the malicious text as it is impervious to force-closing and restarting and will still be on your device when you jump back into the app.

Where did it come from? According to YouTube channel EverythingApplePro it's called the black dot' because of its origins on Android as a bug relating to WhatsApp that was spread with the same emoji, initially in India. The emoji itself is not bugged but has been used as a way to lure victims into revealing the mass string of invisible Unicode characters.

Both versions start with the dot emoji and are followed by the hidden text that does the damage, but it is more effective on iOS as it cannot be removed by restarting the device or force-closing.

It can affect most iPhone models, but the older the version, the more it will infect and freeze. However, it can be removed from all.

How do you remove it? Until Apple releases new firmware to address the root cause, you should not open text messages with the black dot emoji, but if you have already opened it and have a device frozen on a white screen you can follow EverythingApplePro's advice.

Force-close the Messages app and use 3D Touch to open a new message pane. From there you need to backtrack to the main messages list and delete the conversation thread.

This is the latest text bomb to hit iPhones and follows on from the ChaiOS message bug reported by Alphr in January.