Updated: The Nexus 4 boasts a gorgeous 4.7in IPS display and quad-core processor - all for the unbelievable SIM-free price of £239. 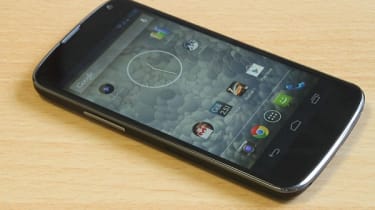 Android 4.2, Jelly Bean is the latest version of Google's mobile OS. We've looked at it on the Nexus 10, however the phone version of the OS is slightly different.

We'll start with what's the same, the UI. This consists of 5 homsecreens, a pull down notification bar and a menu with all your applications. This works very well in comparison to, Windows Phone 8's live tiles as it means you'll never miss an email or an update. 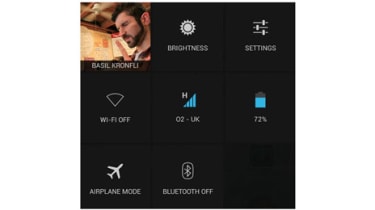 Google has tweaked notifications. When you slide one finger down from the top of the screen, notifications are displayed, but when you swipe with two fingers the system recognises this brings up the quick setting menu. This is a really intuitive feature and works well.

A Swype style input system has been integrated with the stock keyboard from Android 4.1, which we've seen on the Nexus 10. This lets you drag your finger across the keyboard to type. The size of the screen lends itself to this input method one handed, while it can comfortably be used in both landscape and portrait for two handed traditional typing. 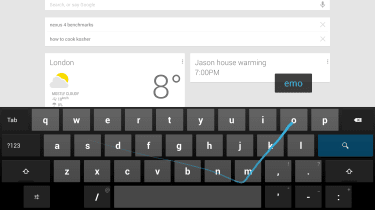 The Swype-style keyboard is now pre-loaded

Android is versatile and easy to share on in contrast to iOS and Windows Phone. There's great support for services such as FTPs through high quality apps. What's more, you can also send virtually any file-format using the Nexus 4's share function and support for Google Drive, Sky Drive, Dropbox and Box mean you won't be short of cloud storage options.

The inclusion of lock screen widgets also give you quick access to your appointments and emails. Rather than unlocking our Nexus 4, we often dipped into our lock screen, got the information we needed and then switched it off.

Moving on to the camera and the LG Nexus 4 is the first Nexus device out there with a sharp shooter. The f/2.4 lens and high resolution are a fantastic start, but Google's new camera UI and photo editor mean photos taken on this mobile phone need never look like they were taken on a mobile phone.

The Nexus 4 is loaded with 3G, DC-HSPA, Wi-Fi, Bluetooth 4, NFC and a GPS. There's only one connectivity option missing from the Google Nexus 4 and that's LTE. It's not a big miss at this time as it's restricted to EE and 4G is expensive for the speeds on offer.

Thanks to the large screen, the Nexus 4 even trumps the iPhone 5 for web browsing and the Chrome browser on board is a perfect companion to anyone who uses its desktop counterpart.

Storage is the only other area we're left wanting in any way on the Google Nexus 4. Available in an 8GB version and a 16GB version, the phone isn't expandable. If it goes down the Asus Nexus 7 route, a 32GB version will indeed be available down the line, but until then, file hoarders beware.

With the 2100 mAh battery lasting one full day with moderate use and sync turned off when home, our impression of Google's latest flagship hasn't been dampened at the last hurdle. 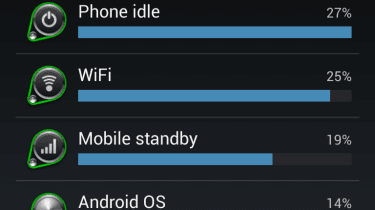 Want serious battery life? Go for the Motorola RAZR MAXX HD that thing goes all day. After a great smartphone, packed with features and excellent spec for a cut throat price? It's the Nexus 4 every time.

Living with the device a bit longer...

We asked another of our reviewers to spend more time with the Google Nexus 4 to see whether they still felt the same a month or two later. This is what they had to say:

As a work tool it's even better. You have all of Google's core services at your disposal as well as the excellent Google Now, which syncs all of your accounts and provides timely updates throughout the day about what you have scheduled.Google Now is what Siri should have been.

This is the most cost-effective flagship smartphone out there. If you kit out an entire workforce of 12 with iPhone 5s, you'll be spending 529 a piece. That's a total of 6,348. If you went with equivalently specced Nexus 4s, at 279 each you'd be spending 3,348. That's a clean saving of 3,000 or 43 per cent for a handset that's just as good, if not better.

Demand for the Nexus 4 has been incredibly high and as a result it has proved to be difficult to get hold of. LG predicted that demand has been 10x higher than expected in the UK.

As of 25/02/13, the 8GB Nexus 4 is available in the Google Play Store with a quoted delivery time of 3-5 business days. The 16GB device is quoted as shipping "in less than one week".

Like the Nexus 10, the Nexus 4 is another class leader. Google have combined a refreshed version of their operating system with a well designed, powerful phone that’s more cost-effective than anything else on the market.

The Nexus 4 goes head-to-head with the likes of the Samsung Galaxy S3 and iPhone 5, and while it might lose out in some areas such as slimness and storage options, its £239 price more than makes up for its few shortcomings. A third and final winner in Google’s 2012 Nexus trinity.