No-one wants their device to die midway through the day so this is an important consideration.

To test the smartphones battery we used our real-world IT Pro intensive test. This required us to carry out one task every hour throughout the day for 12 hours. These included web browsing, video playback, making phone calls and playing a couple of games of Angry Birds to and from work. We had the handsets on full brightness and the Wi-Fi/Power Saver modes turned off. 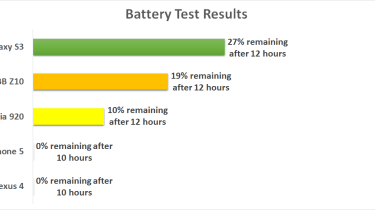 The Galaxy S3 is king when it comes to battery life. Despite packing the largest screen at 4.8ins, it also has the largest battery (2100mAh). Another factor which helps it last the longest is the fact that Samsung has used Super Amoled technology for the screen, which sucks up less power than other devices.

The BlackBerry Z10 was the runner up - with 19 per cent remaining after 12 hours. To make it even more user friendly, the battery is also replaceable - so you can carry a spare on the move and easily avoid power sockets for 24 hours, even with heavy-duty usage. Although we do have concerns about the battery life overnight.

The Lumia 920 came in third place with the 2000mAh sealed-in battery just about limping over the 12 hour mark with 10 per cent remaining.

The iPhone 5 and the Nexus 4 were the worst performing. The iPhone has the smallest battery at 1440mAh, and this combination with power munching Retina Display resulted in a poor showing. You can't replace the battery on the iPhone either, and this is one of the worst features of the device.

We expected the Nexus 4 to perform better. The handset has a battery as big as the Galaxy S3, but the device runs through it quickly especially when using it for tasks such as web browsing. To compound the problem, it is not possible to replace the battery in this device either.