The most commonly used task on a smartphone is web browsing. It's also a resource hungry use case, which makes it a good benchmarking tool. We've run the device through the Sunspider and Peacekeeper benchmarks to help show which has the best browser.

The two Android devices in this test are powered by quad-core processors, whilst the BlackBerry, iOS and Windows Phone handsets all use dual-core chips. 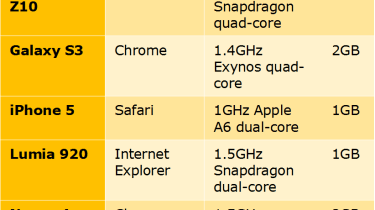 But more cores doesn't necessarily mean better performance. Most apps are not optimised to make use of multiple cores at present and Apple has an advantage over the competition because it is the only firm that designs both its chips and operating system in-house. This allows for a near seamless integration.

The Sunspider benchmark helps to show the raw speed as it measures how quickly it takes a device to render a web page. 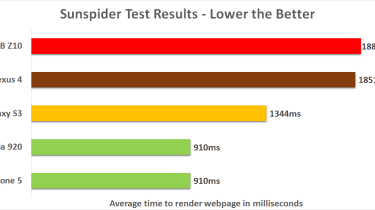 It's the dual-core devices which comes out on top. The iPhone 5 and Lumia 920 returned the same score of 910ms in our tests which is noticeably faster than the rest of the competition.

In third place is the quad-core Galaxy S3, with a reasonable loading time of 1344ms. Meanwhile, the Nexus 4 and BlackBerry Z10 take over double the amount of time to load webpages when compared to the Apple and Windows Phone devices. The Z10 is by far the slowest and it can take 10-15 seconds to load a webpage at times.

The Peacekeeper benchmark also tests JavaScript functionality. Among the tests it includes is benchmarking for HTML5 video + 3D content as well as testing Document Object Model (DOM) which is the standard API JavaScript uses to create a dynamic webpage. 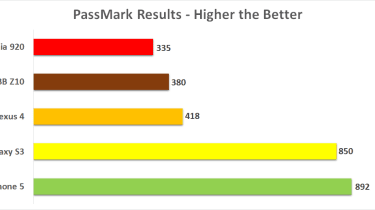 Again it's the iPhone 5, with its dual-core processor which tops the benchmark with a total score of 892 cementing its position as one of the top performing handsets.

The Galaxy S3 jumps up into second place with a score of 693 and the Nexus 4 fairs better in this test too, jumping up into third position.

In a surprise result, the Lumia 920 has gone from joint top in the first test to bottom in the second, with a score of just 335 showing that while Internet Explorer might be one of the fastest around, Windows Phone still needs to be optimised for HTML5 content.

The BB Z10 finds itself in the bottom two again, which leads us to conclude it has the worst performing browser on test. However, it is the only piece of software to natively support Adobe Flash content. So depending on your need to access video content, the BlackBerry handset could turn out to cater to your needs more closely. However, it is also possible to install Adobe Flash on Android devices manually also, should you require the functionality.

The iPhone 5 consistently comes out top in terms of speed and HTML5 compatibility, so it is hard not to recommend it as the best internet browsing device. The only thing going against it is the 4in screen, which is the smallest out of all the devices.