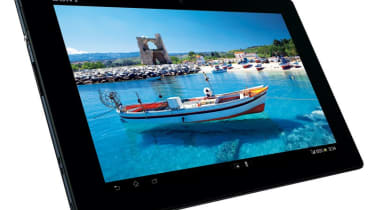 The Xperia Tablet Z is snappy and responsive in use. The touch-screen responds quickly, and the Sony-specific user interface - overlaid on top of Android 4.1.2 - is smooth.

One hiccough that did occur during testing was with background images. Sometimes after loading a memory-intensive application, such as a game, and then going back to the home screen the wallpaper would take tens of seconds to load, with the system defaulting to a black background in the meantime. Even when this happened, however, the device was still responsive to use.

With the Qualcomm Snapdragon S4 Pro quad-core processor, clocked at 1.5GHz, under the hood performance shouldn't be a problem. Despite not being the latest chip, it's still a top-end processor and is backed by 2GB of memory. Performance is reflected in a Geekbench score of 2192, which bests the 1790 of Apple's iPad 4 and its A6X processor. 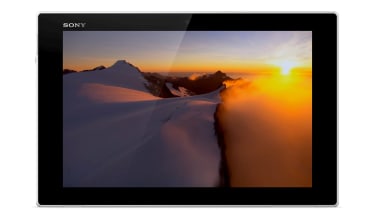 3D performance is impressive, with the Tablet Z easily keeping up with the very latest titles available in the Google Play app store. Web browsing performance, as measured by Qualcomm's Vellamo app, is also good, scoring 2211 on the company's HTML5 test and 620 on the Metal test.

With all this power in such a thin casing, it's easy to assume that the Tablet Z would have poor battery life. Thankfully, this isn't the case: somehow, Sony has managed to cram a lithium polymer battery capable of driving the device for almost ten hours of active use. In HD video playback testing, Sony's estimate was proven accurate: with automatic brightness in an artificially-lit office the tablet managed to play a HD video on loop for 10 hours 20 minutes before powering off.

After a six and a half hour recharge, the device was ready to run for seven hours and 12 minutes playing the same video on full brightness.

It's during the video testing that one of the best features of the Tablet Z makes itself known: the screen. Powered by the same Bravia technology as found in Sony's eponymous HDTVs, the Tablet Z's display is crisp, bright and clear. The screen excels during video use with clarity and contrast rivalled only by OLED panels.

Sony has chosen to customise the Tablet Z with its own software overlay, like the majority of Android vendors. Immediately familiar to anyone who has played with the company's Xperia Z smartphone, Sony's take on Android comes with some nice features missing from its rivals' Android platforms.

The first of these is a suite of applications which add clever multi-tasking to Android. Dubbed Small Apps,' these include a calculator, notepad app - which can sync to Evernote - voice recorder, timer and a miniature web-browser. Each pops up a small window that floats over a full-screen app, and can be moved to other areas of the display by simply dragging. Of particular note is the remote control app: this allows the infra-red port, located at the top of the tablet, to control home entertainment devices from any manufacturer - turning the tablet into an oversized learning remote like Logitech's Harmony family. Additional small apps can be installed from Google Play, or existing widgets quickly repurposed as a small app. 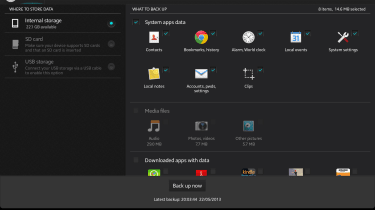 Another neat feature is a pre-installed backup and restore system that will be of particular interest to corporate users. Designed to run on the tablet itself, the software allows the user to decide which apps get their data backed up, with destination choices include a micro-SD card or a USB storage device connected via an optional USB OTG cable. Backups are encrypted with a user-chosen password.

Google has recently stopped users from transferring purchases from the Play Store to the SD card. This means the internal memory on the device can get clogged up quickly. However, Sony has done its best to mitigate this. In the Settings menu there is an option which allows all transferable data to be moved with to the SD card with one click.

Other pre-installed software packages aren't so important for business users. As you might expect from Sony, there's a heavy focus on entertainment: Sony's own subscription-based video and music streaming services are pre-installed, along with Crackle and Sony's attempt at a Shazam-like music identification system dubbed TrackID. The device is also PlayStation certified, and can access and install games from the PlayStation Store.

The camera app is another tweak of Sony's. Designed to make the most of the Exmor R CMOS sensors at the front and rear, it includes in-built high dynamic range (HDR) support, image stabilisation, high ISO shooting and other nice features - although all of this is tempered by the very small lenses and lack of flash. In good lighting the results can be acceptable - but it's not a replacement for a real camera, or even a mid-range smartphone.

The Snapdragon S4 Pro might not be the newest chip on the block, but it's certainly powerful enough to drive the Tablet Z. Likewise, the 1920x1200 display seems sedate when even Sony's Xperia Z smartphone offers 1920x1080, and is easily bested by Apple's retina-class iPad 4, but the clarity of the Bravia-branded screen is undeniably impressive. Even though the manual warns against submersion, the Tablet Z's waterproofing makes it a rugged - if slightly scratch-prone - device, and if you're on a budget you can save a few quid by buying the entry-level 16GB model and upgrading the storage with a cheap micro-SD card.

Is the waterproofing a gimmick? Certainly. Could it come in handy? Absolutely - coupled with the pre-installed Google Maps, it turns the tablet into a handy high-resolution navigation system that you won't have to hide under an umbrella. Is it worth paying the 80 premium over the far higher resolution, though not waterproof, Nexus 10? Depending on your planned usage, quite possibly.

This article was originally published on the 4th March 2013 as a first look and has been updated to a full review.

Sony has nailed it with the redesigned tablet. The performance and features are worth the iPad-equivalent pricing. However, we just can't help feel that the Tablet Z isn't going to be as widely adopted as it should be.