Updated: HTC unleashes its first 1080p smartphone. Can this revive the firm’s fortunes and fight off the forthcoming Samsung Galaxy S4? 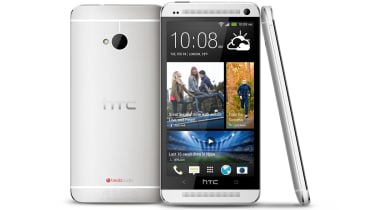 Sense never felt less than smooth during our test, and that's because HTC has used the most powerful hardware we've yet seen in a smartphone.

Qualcomm's Snapdragon 600, a quad-core chip running at 1.7GHz, takes centre stage, and it's accompanied by 2GB of RAM and an Adreno 320 GPU. That's a big-time specification, and the One's score of 11,617 in the Quadrant benchmark outpaces rivals: the Sony Xperia Z scored 7,744, and the Galaxy S3 languished with 5,752.

Right now, the HTC One is the world's most powerful smartphone.

Android's stock browser returned better scores than Google Chrome in browser benchmarks. In the SunSpider JavaScript test the stock browser scored 1,154ms to Chrome's 1,703ms, and in the Peacekeeper HTML 5 benchmark the standard browser's score of 692 trumped the 470 scored by Chrome.

This browser-based oddity doesn't change the facts, though: right now, this is the world's most powerful smartphone. It zipped through Android's various menus without any hint of slowdown, the BlinkFeed moved smoothly, and games provided few problems. ShadowGun and Dead Trigger ran without issues and, even with the huge number of pixels to push, Real Racing 3 barely slowed down.

The powerful specification is augmented with all the bells and whistles, too. Bluetooth, NFC, dual-band 802.11n Wi-Fi and 4G support are on-board, and the IR blaster for the TV app is concealed inside the black power button.

Even Beats Audio works well, with plenty of bass that still doesn't manage to overpower the rest of the range when used with headphones. We like Beats Audio when it's pumping out of the two front-facing stereo speakers, too. HTC calls its speaker system BoomSound, and there's more volume, bass and balance then we're used to hearing from phone speakers although, true to form, they're still quite tinny.

The 2,300mAh battery had 60 per cent of its capacity left after our 24hr run-down test, which simulates browsing, a phone call, audio playback and file downloads. That's on a par with the Galaxy S3, but not quite able to match the Sony, which had 70% of its power left. 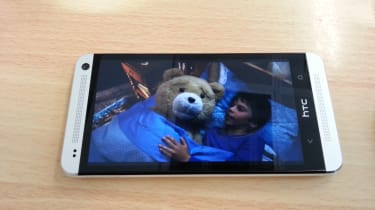 That means the HTC's contrast ratio of 1,202:1 outstrips the Sony's 451:1, and it makes for a screen that's much more vivid, especially with lighter tones. The HTC doesn't have the slight red cast to bright images that hampers the Sony's panel, and its viewing angles are much better. The HTC's LCD screen has a tendency to crush dark shades together, but that's its one weakness.

And, of course, the HTC's screen is pin-sharp, although we're not sure how much of a difference having such a high resolution screen will make to daily use. Text and images are a little sharper on the HTC's screen than on the Nexus 4's 768 x 1,280 panel, but we had to look very closely in order to truly spot the difference.

HTC has gone against the grain with the One's shooter. With every other manufacturer touting more megapixels as a key feature, this handset includes just four. HTC calls them "Ultrapixels", and reckons that its camera makes up for its smaller pixel count by including larger pixels that capture more light. There's optical image stabilisation, too, which should help with low-light images.

The One's shooter is excellent, although it's not quite able to top the best smartphone cameras. It delivered accurate colours and good detail in our range of test shots. Its macro mode was pretty good, and the One stitched together panoramas at a good pace and with no major errors.

The lower megapixel count meant that there was a little bit of noise across our test pictures, and night images weren't as good as the stunning shots delivered by the Nokia Lumia 920. 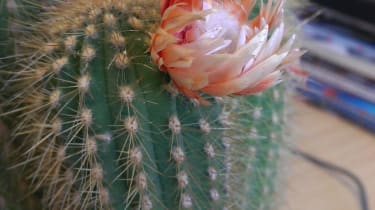 We're fans of HTC's redesigned camera app. The top-left corner is home to a bevy of options, the bottom-left corner houses more than a dozen filters, and swiping left and right switches between the front- and rear-facing shooters.

Tapping the top of the screen opens the Zoe mode, which films a 3.6s clip of 1080p footage while simultaneously snapping twenty 4MP images. Each frame can be extracted as a standard photo, and HTC's software strings together Zoe clips into 30s highlight reels. We're not sure about how useful this is: the camera's burst mode is just as effective at capturing fast-paced action.

The HTC One is an undoubtedly luxurious bit of kit, but it's not always that expensive it's free on 3G contracts that start at a reasonable 31-per-month. It's not good value on 4G, though, thanks to EE's extortionate pricing structure, and SIM-free it costs 504 inc VAT.

Updated: 15/7/2013 Clare Hopping, editor of our sister website Know Your Mobile, tells IT Pro what it's like living with the HTC One four months on.

"The HTC One is probably the best smartphone I've used since the Nokia N81 stole a piece of my heart in 2007.After using it for four months though, a little of the glimmer has passed. The beautiful aluminium shell is showing signs of wear and tear with scratches and the Beats Audio logo has almost completely vanished.

I gave up on BlinkFeed a week or two into my experience with the HTC One it's just too messy and I prefer having my most used apps as a home screen rather than a feed of what everyone's saying on Twitter or Facebook. I also found it doesn't update as often as it should, which takes the point of it away.

I've found myself increasingly turning on battery saver mode at 3pm if I don't have access to a charger, which is disappointing, but expected with a reasonably svelte smartphone.

With sunny weather gracing the UK, the display on the HTC One needs to be cranked up manually when you step outside and then reduce it again when you step back inside. But again this is a common problem with all smartphones.

The last foible is that sometimes during, or after a phone call, I take the One away from my face to hang up but the screen is stuck asleep. It's nothing a quick tap on the power button won't rectify, but the Samsung Galaxy S3 and S4 are much more reliable for detecting your face next to the screen.

Don't get me wrong though, the HTC One is still my favourite device to use on a daily basis and one I hope will survive its two-year contract."

The HTC One is currently the world’s best smartphone. It’s got the best design, specification and screen so, if you’re in the market for a high-end handset, this is the phone to buy.