An Android smartphone which slots into and powers a 10.1in tablet. Is it a gimmick or an ingenious idea? 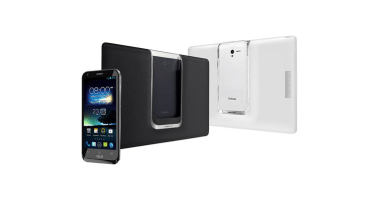 What really distinguishes the Padfone 2 from this competition is what happens when you combine the dock and phone. Do they really work together? The answer is a resounding yes.

The mechanism is relatively simple; just slide the phone into the back of the tablet dock. Slender, secure and satisfying, it all comes together with cohesion and finesse. You don't have to do anything additional - it just works.

As for docking it and swapping over to tab form factor, this is handled in two ways. If using the pre-loaded apps, docking the phone will transfer whatever app you were working with to the 10.1-inch screen. 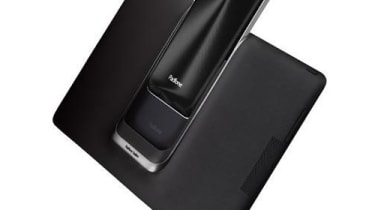 It's pretty seamless save for a second of waiting and a couple of screen flickers. Applications thataren't supported by this transfer process are simply shut down when the switch takes place.

This is hardly the whole story though.

The first benefit to having one brain across two devices comes in the form of apps and files. You'll only need to download your PDF viewer, or that presentation once to get it onto both devices. That email account will just need to be set up once, and you know what? Your signature will be set across both phone and tablet.

If it feels like we're labouring the point, it's because it makes such a difference. Saved data such as keyboard dictionaries and Wi-Fi networks all turn the Padfone 2 into a huge time saver for anyone who wants both an Android phone and tablet.

Remaining specs inside the Padfone 2 are impressive too. The 13-megapixel camera does a sterling job, with good detail levels making it perfect for snapping docs in the absence of a scanner and the flash lighting up situations nicely.

Storage options will include a 64GB version in the coming months, with the 32GB variant available right now. This should be plenty, especially when coupled with the 50GB of Asus Web Storage the device ships with, accessible from a PC or Mac as well as your

The Achilles Heel of most devices we test, but the Padfone 2 aims to break with tradition by offering up two batteries. The 2140mAh in the phone and 5000mAh in the tablet. This should comfortably provide a full day of heavy usage and can last two days with moderate usage.

What makes it come together even more harmoniously is the fact that when docked, the tablet battery actually charges the Padfone 2. Sling the two in your bag while in a meeting for example and you'll be topped up for the day at the meeting's end innovative and practical, two of our favourite words.

That sentiment generally sums up our impressions of the Padfone 2. It's something fresh, always a talking point and doesn't lose its novelty value. In the same breath, it's an incredibly powerful productivity tool, potentially saving you time, money and energy and who's going to argue with that

The Padfone 2 isn't just an energy and time saver, it's also a potential money saver at 599. Here are some other tablet / phone combinations:

The Google Nexus 4 (16GB) and the Google Nexus 10 (16GB), cumulatively offer an equal amount of storage as found in the Padfone 2 (32GB), and their combined price is a tad cheaper (598). But anyone aware of Nexus pricing knows that these are the cheapest premium devices out there, anomalies in terms of their value.

For a more representative combination, the Samsung Galaxy S3 and Note 10.1 will cost you around 800 and for an iPhone and an Wi-Fi iPad, you'll pay 928.

While the Padfone doesn't pack a Retina display, it's phone screen is still competitive and it's the only device mentioned other than the iPhone to offer LTE.

Having a data connected tablet would also hike the prices of the aforementioned sky high, so while 599 might initially sound steep, it isn't.

A beautifully crafted handset, which fits into the 10in chassis to become a tablet. The idea to combine two form factors is brilliantly executed by Asus. We love the battery life the device has to offer and the pricing is also reasonable for the specification on offer.