The enterprise wars are over. Apple has won.

Windows may have dominated desktop computing for the last two decades, but the shift to mobile has favoured Apple, not Microsoft. 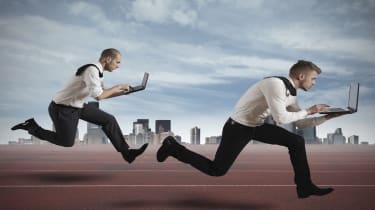 Inside the Enterprise: Back in the '90s, industry watchers were calling time on Apple. The company's products seemed lacklustre; the early promise of its Mac computers had failed to stop the juggernaut that was the IBM and Windows PC.

For the company that claimed to have invented the desktop computer with the Apple II, the Mac's market share was just a few, small percentage points. Even early adopters and advocates of the Mac in business such as BP switched to Windows.

The iPhone and specifically, the iPad, have changed that. Apple devices are now commonplace in companies that would have either shunned desktop Macs, or reluctantly issued them to a few graphic designers and other "arty" types. Data from Citrix, for example, showed that last year, 58 per cent of devices using its enterprise mobility service ran iOS.

Other research, by HIS iSupply, shows that the iPad continues to lead the tablet market, despite the growing popularity of Android devices. Microsoft phone and tablet OS market share remains a long way behind that for conventional Windows.

And anecdotal evidence suggests that the changes go beyond the popularity of iPads. Drop into any city centre caf, or at least one with decent Wi-Fi, and the chances are the that Macs will outnumber PCs; sometimes there are no PCs at all. In the caf where your correspondent wrote this article, there was one solitary PC user, and even he had an Apple sticker over the logo on his Dell laptop.

Apple, then, seems to have benefitted from another trend in the IT industry: bring your own device (BYOD). Given a choice, and the budget, knowledge workers seem to choose Apple; analyst figures suggest that the firm's best-selling machine is the lightweight MacBook Air.

Users buying or picking their own laptops seem unconcerned by the Mac's supposedly less business-friendly features, such as Mac OS 10.8, the Mac App Store or Microsoft's far from perfect Mac version of Windows.

Perhaps the fact that the Mac can run Windows, or the move to browser-based enterprise applications and cloud computing means these things don't really matter. Or perhaps Apple's long-standing claims about superior ease of use equating to better productivity really hold true.

Or maybe, for some users, Windows 8 despite all its enterprise features feels more awkward than earlier versions of Windows, or the Mac OS. Certainly, it is interesting to see that when people spend their own money, they are happy to pay a premium for a Mac.

But this also suggests that Apple's strategy of making the Mac more iOS-like, rather than building a more PC-like tablet, is the right one. Most of us consume more data or information than we generate during the working day, and even for some relatively complex creation tasks, tablets are improving. Adobe has a neat version of Photoshop for the iPad, and Apple's own video editing app, iMovie, shows just what can be done.

Of course there is still a need for heavier-duty computers for some tasks, just as there are tasks that still suit a desktop PC more than a laptop. But a few years ago, it was hard to convince an IT department to support an Apple machine of any sort. Today, that is no longer the case.