The Galaxy S4 packs a 5in screen, secure Android and bigger battery. Is it another sure-fire hit? 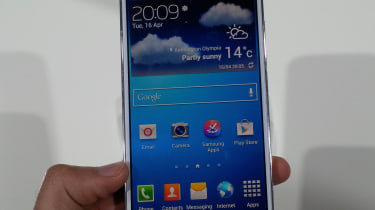 Samsung's Galaxy S4 will arrive in the UK on 27 April and, from first impressions, it looks like the South Korean firm has developed another well-rounded device.

Despite looking identical to its predecessor, every key component inside the high-grade plastic chassis has received an upgrade. The display is bigger and brighter, processor faster and battery 25 per cent larger.

As with most Samsung devices, the display is shaping up to be the standout feature on the S4. Samsung has increased the screen size from 4.8ins to 5ins, but - despite being bigger - the firm has shaved 3g off compared to the S3. Due to the size, we expected the S4 to be a handful when compared to smaller devices such as the iPhone 5 (4ins). 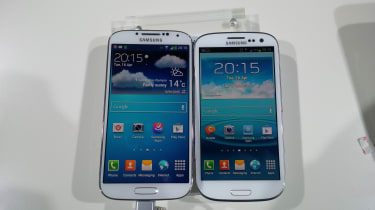 The newer S4 on the left is a tad larger and squarer than its predecessor, but overall design remains the same

The extra pixels do make up for it when surfing the web, browsing a gallery or watching a video. Viewing angles are excellent and the colour replication looks to be top notch. 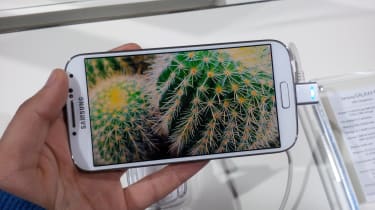 No Octa-core processor for the UK

Sadly, the 1.6GHz Octa-core processor will not ship in the UK edition. Instead, users on this side of the pond will have their handsets powered by a quad-core Snapdragon chip running at 1.9GHz.

Combined with 2GB RAM, this quad-core chip looks capable of holding its own against rival devices. The S4 we got our hands on powered through the Sunspider benchmark in a respectable 1171m/s, not too far behind the 920m/s the iPhone 5 acheived.

The final major hardware upgrade is the rear camera which now packs 13-megapixels up from the 8-megapixels in the S3. Samsung is touting features such as dual-shoot which allow the front and rear cameras to work together.

Battery life has never been a problem with all Galaxy S handsets leading the way in their class. The mammoth 2600mAh battery pack powering the S4 looks like it will continue this tradition. It's replaceable too, so will no doubt attract power users.

It appears that Samsung has nailed it on the hardware side yet again. However, the firm has also tried to beef up the software in an attempt to attract business users.

Taking a page from BlackBerry's book, Samsung has also introduced Knox software. This will allow IT admins to separate business and personal information on smartphones much like the BlackBerry Balance system on Z10 devices.

Samsung claims Knox is compatible with widely used MDM, VPN and directory services, and will be ideal for business who want to put BYOD policies in place.

Our favourite feature so far has been Split screen mode. This enables users to properly multitask by pinning two apps to the screen at the same time. So it's possible to browse the web and view emails or watch a video and reply to a text message. 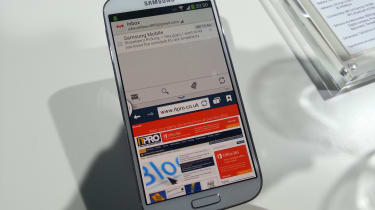 The Korean firm shows no signs of letting up when it comes to gesture-based interactions either. Many of these, such as Smart Stay and Direct Call, were introduced in the S3, and are built upon in the latest flagship handset.

During our hands on, eye tracking appeared far more consistent when compared to the S3. You can now scroll web pages by gently tilting the handset backwards and forwards as it tracks your eye movement. Videos automatically pause when you look away from the screen and continue when you look back.

Samsung has also made it possible to interact with the handset without touching the screen. You can move through a picture gallery or answer a phone call by waving a hand from the right/left hand side. Air View allows users to preview emails, picture or text messages by hovering a finger over them without touching the screen. Although these features are far from life changing they may prove to be useful in situations when users are wearing gloves.

Overall, the S4 has left a positive impression on us and it looks likely to continue being the best Android on the market when it's released.