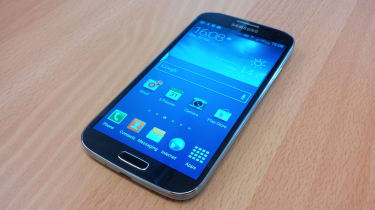 Samsung has boosted battery pack to 2,400mAh of power. After six hours of moderate usage, with gestures such as Smart Stay and Air View activated, the S4 still had 50 per cent battery remaining. At 7pm, the handset had 10 per cent remaining.

Battery saver mode helped to eke out the last remaining drops of power efficiently. The S3 currently holds the record for the longest lasting device in our IT Pro intensive battery test and we expect the fourth generation handset to get close to this.

Update: The results from the intensive battery test are in. Our test involved syncing our work email, Gmail and Twitter accounts and setting content to be pushed through in real-time over the course of a day. We also used the S4 to browse the web, watch videos, make phone calls and play games.

Brightness was cranked up to the maximum level, Wi-Fi remained off and battery saver was turned off. We also had many of the gestures turned off, with the exception of Smart stay and Air View.

The S4 managed to last the entire 12 hour day, with 15 per cent remaining. This wasn't quite as good as the S3 which had 27 per cent left in the tank after the same period. However, this is not surprising because the S4 has a bigger HD display, faster processor and more software features draining the battery.

Despite not breaking any records, the S4 is considerably better than rivals such as the iPhone 5, which ran out of juice after 10 hours.

Is this the best smartphone in the world? The S4 beats the competition into submission, offering more features, smoother performance and user upgradeable parts. Some users may not like the plastic casing, but it's not a bad thing that Samsung has prioritised function over form. It may not be as cheap as the Nexus 4, the S4 feels more durable, has more features and is user upgradeable.

UK users may feel a tad disappointed the Octa-core is not being shipped here, but it could make an appearance in the future.

If you've got an S3, we would suggest you don't have to rush out and get the latest handset. But if you've got an older handset such as the S2 or are thinking about jumping from Apple, this is the handset to get.

Samsung's Galaxy S range continues to set the bar higher with every refresh. The Korean firm has optimised performance, added support for multiple apps, boosted the display and shaved off weight. Once Knox is activated, it could become an enterprise favourite.